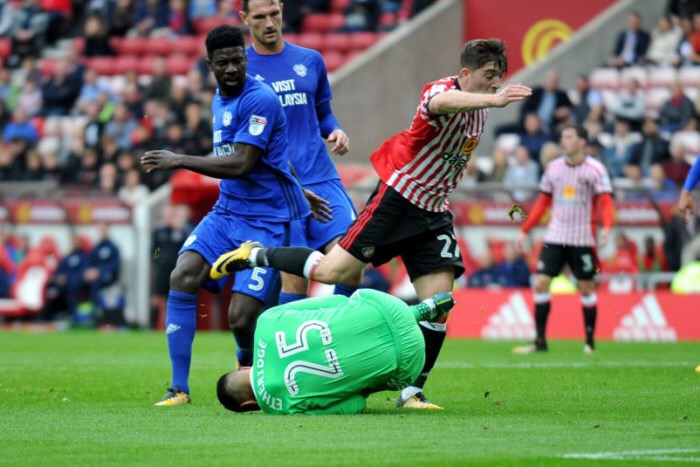 High flying Cardiff City piped more pressure on struggling Sunderland with a 2-1 victory at the Stadium of Light.

Neil Warnock’s high flying Bluebirds sat at third place before kick off but hadn’t won a game in three. This however was better than Sunderland who haven’t won in five. Sunderland fans haven’t seen a win on home soil since a 1-0 victory against Watford in December 2016. Simon Grayson made a noticeable amount of changes from the side that were beaten 3-0 in the League Cup on Wednesday. Jonny Williams missed out through illness and Callum McManaman was out through a late knock. Duncan Watmore still wasn’t fit enough to make the bench although Aiden McGeady was. Warnock benched Junior Hoilett, the Canadian was rumoured to become a Sunderland player five years ago for around £7 million.

Sunderland started the game poorly and as a consequence with the first chance of the game found themselves 1-0 down.Chris Bryson, on loan from Derby, finished a superb play which was started by goalkeeper Neil Etheridge. He played it long for Mendez-Laing to hook it over his head into the area for the runner Bryson, who volleyed home with a delicate knock past the helpless Ruiter.

Ruiter was called into action again shortly after, this time to deny midfielder Aron Gunnarsson’s volley from outside the penalty area, Bryan Oviedo then blocked Nathaniel Mendez-Laing’s rebound.

Sunderland then got their first real chance of the game when Costa Rica international left back Bryan Oviedo drove forward before unleashing a long range drive, beating Etheridge but not the inside of the post.

Second half saw Sunderland come out of the blocks a bit more. Lynden Gooch made a run down the left into the area only for centre half Sean Morrsion to clumsily slide in on the Californian winger and gave referee Peter Bankes no choice but to award a penalty. The man who won it then took it, not trusting striker James Vaughan who had missed two in pre season, the academy graduate sent former Fulham goalie Etheridge the wrong way as the ball nestled into the bottom right corner. This being Gooch’s first league goal for the Mackems.

Robbin Ruiter was called into action again when a corner caused problems when Gabon born centre back Bruno Ecuele-Manga out jumped Marc Wilson and the Dutchman had to use his height to scramble across and turn it up onto the bar.

Bryson came close to a brace when nobody closed the on loan midfielder down and was allowed a 30 yard shot which Ruiter had to get down to at his right hand post.

Ruiter was again forced into a save when substitute Hoilett let one go from the edge of the area. This came after some good work by Denmark youngster Kenneth Zohore, Ruiter managed to turn the Canada striker’s shot out wide.

The shot by Hoilett lead to a corner, which was whipped in, and the man who gave away a penalty at one end won one at the other as Sean Morrsion was brought down by a push from Ivorian Kone. Referee Bankes pointed to the spot instantly although it was extremely soft to give, yet lazy defending from Lamine Kone. Central midfielder Joe Ralls converted from 12 yards, 15 minutes from time after he sent the six foot five goalie the wrong way.

Very few chances arose after that with Sunderland lacking urgency towards the end whilst Cardiff was happy to just play it about. It looked like Grayson had set up for a draw and didn’t change that all game, with the Black Cats never looking like scoring apart from a few half chances. Once again James Vaughan did a lot of running about and won knock ons but nobody seemed to be in 20 yards of him to get the second balls.

Personally, I’m not one to use the excuse of the referee costing a team the game but Mr Bankes certainly had something to do with all shares of the spoils going back to South Wales. The only notable decision given to Sunderland was a stone wall penalty, every 50/50 seemed to go the visitors’ way.

A slightly more tolerable journey back for the travelling Bluebird fans whereas home supporters still wonder when a win will come at the Stadium of Light. This defeat puts Sunderland into the relegation zone, a familiar sight for most Wearsiders however not the Championship bottom three. Only managerless Birmingham City and newly promoted Bolton Wanderers currently lie below the Black Cats.

For Sunderland next is a long trip to East Anglia to Portman Road, home of former manager Mick McCarthy’s highflying Ipswich Town, this is on Tuesday night with a 7:45pm kick off, last trip to that part of England saw a 3-1 victory over rivals Norwich City.