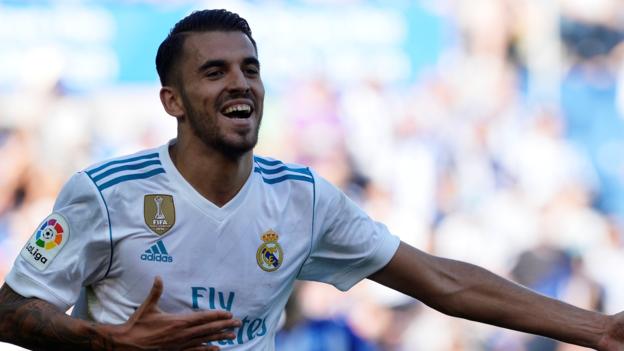 Debutant Dani Ceballos’ brace led Real Madrid to a deserved, but still unconvincing victory. The Real faithful also suspected foul play as the referee made some questionable decisions during the course of the match.

Alaves came into the match with zero points and zero goals, hoping to salvage something out of it. Real, who are also struggling in the La Liga, wanted to get back to winning ways and boost their confidence levels.

Isco played his 200th game, while Ronaldo started up front with Asensio and Vasquez on either side of him. Toni Kroos and Marcelo were both out injured.

Newcomer Dani Ceballos made his mark on the match in just under 10 minutes as he scored with a driven shot after holding off two defenders. The Spaniard was instrumental for Real in the game, with 92% pass accuracy and some solid touches here and there.

Alaves equalised in the 34th minute as Manu Garcia headed home from close range. This was Alaves’ first goal of the season, but it didn’t account for much.

Ceballos doubled his tally for the afternoon as he scored from a similar position. The goal came out of nowhere and for a moment it looked like it hadn’t stood.

Real were unlucky and couldn’t finish their chances, something we’ve been hearing all season. Both Vasquez and Asensio had chances to shoot but instead kept on dribbling. Ronaldo had two good shots which hit the post and much more

Ronaldo had yet another frustrating night, he looked out of touch at first but got back to his usual form later on. Despite all that, the winger is still yet to score in the La Liga this season.

The post was arguably the best player for both teams, denying two goals for Real, and one for Alaves. The Basque club were threatening Madrid every now and then, which was not at all a good sight for Zinedine Zidane.

Los Blancos had a fair amount of decisions go against them, some which were crystal clear but not given. First, Sergio Ramos had a fair goal disallowed because Ronaldo appeared to foul an Alaves player, when instead he was the one fouled. There were three clear penalties not given, one which involved a tackle from behind. Ronaldo was kicked and pushed back amidst other incidents.

Real ended up holding on to the win, which was a relief. This however didn’t throw away all the concerns, as the club has to face Borussia Dortmund midweek, who are in form.