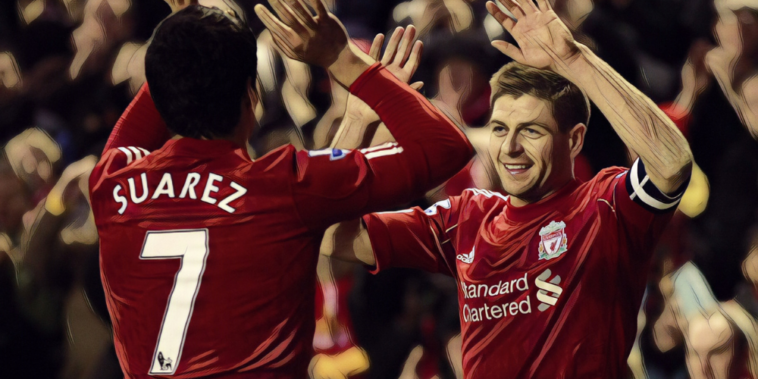 Luis Suarez has praised former Liverpool boss Brendan Rodgers and has revealed how Steven Gerrard convinced him to reject a move to Arsenal.

Suarez returns to his former side in the Champions League group stages on Wednesday evening and the now Atletico Madrid forward has reflected on his career with Liverpool.

Suarez spent three-and-a-half seasons at Liverpool and developed into arguably the Premier League’s finest footballer before his departure for Barcelona, scoring 69 goals in 110 league appearances for the Reds.

The Uruguayan was named as the PFA Player of the Year and FWA Footballer of the Year following a memorable 2013/14 campaign, finishing as the league’s leading scorer as Liverpool narrowly missed out on the Premier League title.

Suarez’s stellar season came after a summer of transfer speculation linking the star with Arsenal – who infamously activated a release clause in his contract with a bid of £40 million plus £1 –  and the forward has revealed the role former Liverpool boss Brendan Rodgers played in his development and decision to remain at Anfield.

“I think I’d been at Liverpool for a year and a half when Brendan took charge in July 2012,” he told UEFA.

“Back then, I had opportunities to sign for other clubs who were getting in contact with me, but he phoned me when I was in Uruguay on holiday, to tell me that he had another way of thinking, that he wanted to change the club and its philosophy, that he wanted the club to get back in the Champions League and fight to win big trophies, that he was going to make the team play great football.

“He asked me to believe and trust him. I enjoyed that chat. I liked his conviction, the philosophy he wanted to implement at the club, so I talked to my agent and the club to say that I didn’t want to leave, that I wanted another opportunity to be successful at Liverpool. That year wasn’t as good as we wanted, but ideas were already pretty clear. So then the 2012/13 season goes by, and I wanted to sign for Arsenal, since Arsenal had played in the Champions League every season prior to that.”

Suarez also admitted that conversations with Steven Gerrard helped him reach a decision to stay at Liverpool, revealing the club captain’s belief that the likes of Bayern Munich, Real Madrid and Barcelona would come calling if he remained on Merseyside for a further season.

“I had some further discussions with the coach, as well as with Gerrard. He was the one that convinced me. I told him I wanted to keep being successful, that I wanted to play in the Champions League.

“So, he said to me, ‘If this year we keep improving as we have been, and you’re at the level you have to be, next year you’ll be able to play for Bayern München, Real Madrid, Barcelona, or whatever club you like. You’ll have the chance to choose, but stay for one more year.’

“I remember that talk with Gerrard, and I remember everything the coach said to me. He texted me things like, ‘Stay for another year, just try it.’ And, well, that was the year we were close to winning the Premier League. That’s thanks to the team efforts, obviously, but especially to the philosophy and conviction Brendan Rodgers conveyed to us as the coach.”