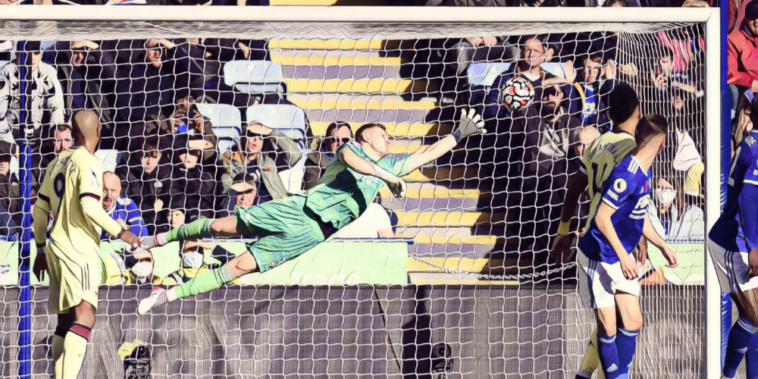 Ole Gunnar Solskjaer needed his major players to come to the fore at Tottenham, the pressure on the Manchester United manager having reached almost unbearable levels following the Red Devils’ 5-0 thrashing by Liverpool last week.

United were without a win in four Premier League fixtures ahead of the clash in North London and another defeat could have proved fatal to Solskjaer’s position at Old Trafford.

Fortunately for the Norwegian, he has a player of Cristiano Ronaldo’s calibre amongst his ranks, with the five-time Ballon d’Or winner – operating in a front two following a tactical tweak – delivering a moment of star quality to open the scoring.

Bruno Fernandes’ lofted cross reached Ronaldo at the back post, who fired a superb first-time volley back across goal to set the Red Devils on their way to a resounding win in the capital.

Ronaldo later claimed a fine assist for Edinson Cavani as the veterans combined to make it two, his display a much-needed boost for Solskjaer who will hope the win at Spurs can spark a revival.

United’s win also proved to be the last fixture for Nuno Espirito Santo at Spurs, who was sacked in the aftermath of the defeat, a scenario which showcased the fine margins in the pressured environment of Premier League management.

Crystal Palace secured the result of the weekend after beating Manchester City at the Etihad, the Eagles well worth the three points as Patrick Vieira came back to haunt his former side.

Palace have performed admirably this season without gaining the necessary results their performances have deserved, but earned a valuable three points with a display of tenacity and clinical cutting edge on the counter.

Conor Gallagher has wasted little time in becoming an indispensable member of a new-look Palace side since his loan arrival from Chelsea, the midfielder’s mix of endless energy, tigerish defensive work and intelligent movement making the 21-year-old a pivotal player.

Gallagher set Palace on their way to victory after robbing Aymeric Laporte to free Wilfried Zaha for the early opener, before starting and finishing a late counter-attack for his third Premier League goal of the campaign.

Chelsea’s academy system has produced plenty of talent in recent seasons with a whole host of Cobham graduates flourishing right across the division, with Gallagher’s performances having no doubt provided Thomas Tuchel with food for thought.

Has there been a better week of Premier League goals this season?

Whilst the latest round of fixtures may not have produced a Goal of the Season contender, there was no doubt a dense collection of brilliant efforts with almost every fixture providing a moment of real quality.

We’ve opted for Brentford’s Saman Ghoddos for our Goal of the Week, however, an acrobatic effort to provide his side with some consolation in their defeat at Burnley.

Brentford were well beaten in arguably their most disappointing display since promotion, but a glorious goal from the substitute was a rare highlight in an otherwise poor performance.

While there was plenty of contenders for the Goal of the Week award, there’s only one undisputed winner for this one.

Aaron Ramsdale’s arrival at Arsenal was greeted with more than its fair share of doubters, the goalkeeper having suffered back-to-back Premier League relegations before a £24m move to the Emirates.

The spending of a significant sum on a goalkeeper initially expected to serve a backup role raised further scrutiny given the apparent need for strengthening elsewhere within the squad, but since being handed his opportunity, Ramsdale has not looked back to emerge as a key figure in Arsenal’s revival.

It’s now seven games unbeaten for the Gunners who are just three points adrift of the top four, their latest win at Leicester amongst their most impressive and a performance which showed the growing character of Mikel Arteta’s youthful side.

Ramsdale was outstanding to secure a fourth clean sheet in just seven league fixtures, including making a stunning save to deny James Maddison’s free-kick, tipping the effort onto the crossbar before reacting quickly to stop Jonny Evans’ follow-up.

Aaron Ramsdale that is insane! 😱

How he kept out this James Maddison free-kick, we will not know! 🧤⛔️

Ramsdale’s full-length dive brought praise on social media from Manchester United goalkeeping great Peter Schmeichel, who hailed the save as the best he had seen for years.

The 23-year-old’s save was the highlight of an all-round performance of solid goalkeeping and fine distribution, with Ramsdale soon set to be pushing Jordan Pickford at international level if he can maintain the standards set in recent weeks.

Best save I’ve seen for years by Ramsdale👏👏👏

Brighton’s performances this season have won admirers and the Seagulls bounced back from last weekend’s loss to Manchester City in impressive fashion this week, recovering from a shaky start to secure an invaluable point at Liverpool.

Two goals down inside 24 minutes at Anfield, Brighton fought back valiantly and were perhaps unfortunate not to secure victory following a bright performance on Merseyside.

Graham Potter deserves huge credit for his transformation of the Seagulls and has done so whilst implementing a possession-based attacking philosophy, with Brighton becoming just the third side – after Chelsea and Manchester City – to avoid defeat at Liverpool so far this season.

Potter’s use of Leandro Trossard as a false nine provided a shrewd move as the Belgian dropped into dangerous half-spaces behind a Reds midfield lacking the defensive presence of Fabinho.

Brighton’s comeback was only the sixth time in 250 occasions that a team has fought back from two goals down at Anfield to secure a Premier League result and the first in five-and-a-half years.

Norwich’s season is heading one way and that is straight back towards the Championship at record pace, the Canaries’ winless start to the season continuing with a 2-1 defeat to Leeds at Carrow Road.

Daniel Farke’s side have now taken just two points from their past 20 games at Premier League level, whilst there are few signs that record will improve with the club looking well short of the standard required.

2 – Norwich have taken just two points from their last 20 Premier League matches (D2 L18) and haven't scored more than once in any of their last 28. Only Wolves (1984-2003) have had a longer run of games without scoring more than once in top-flight history (30). Stranded. pic.twitter.com/OvWSAVo7bi

Aymeric Laporte’s self-destruction proved costly for Manchester City this weekend, with the centre-back guilty of losing the ball in a dangerous area for Crystal Palace’s opener, before receiving a first-half red card for hauling down Wilfried Zaha.

Laporte, somehow, escapes our dishonourable award of the week, however, with Harry Kane claiming this week’s Donkey of the Week award.

Spurs were simply awful in defeat at Manchester United and the performance of Kane symbolised their struggles under Nuno Espirito Santo, the forward lacklustre, ineffective and anonymous for much of the contest.

Kane even found himself booed by sections of the Spurs support and what comes next will be fascinating to watch, with Nuno sacked and a new manager soon set to arrive.

Was Kane unhappy and frustrated with the manager’s tactics? Or is his relationship with Spurs irreparable following his failure to engineer a summer exit to Manchester City?

There is much mediocrity surrounding Kane at the Tottenham Hotspur Stadium, but the club’s fans can still expect more from a footballer who was arguably the Premier League’s best last season.

At the same point last season Kane had seven goals and nine assists from nine league games – he has just one of each for the 2021/22 campaign to date.

His form is a cause of huge concern for Spurs and unlocking the best from the England captain will be of paramount importance to the incoming new manager, with Nuno’s lack of ambition ultimately costing him his position in charge.