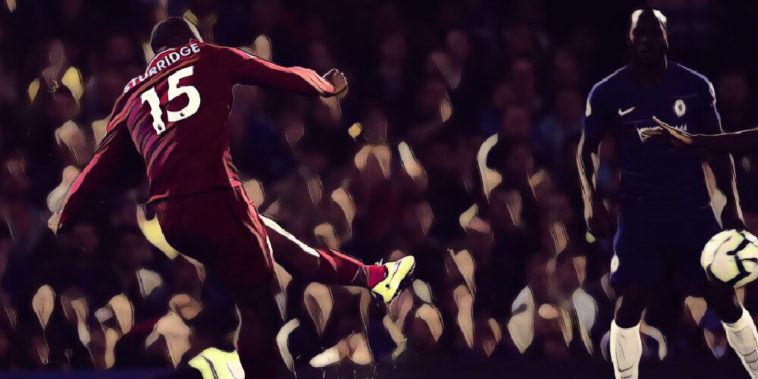 Just watch it again. This time, keep an eye on Kepa Arrizabalaga. Daniel Sturridge receives the ball, takes a touch  – the England player’s intention was clear as day – and strikes. Kepa bounces once, twice on his feet, and as the ball flies above him and crashes into the net, the Spanish keeper, the world’s most expensive in his position, is at his fullest stretch, and yet, he gets nowhere near it.

That’s how good a goal it was from the former Chelsea player at Stamford Bridge on Saturday evening, and it rescued a point for a Liverpool side that thoroughly deserved it.

It was an excellent game of football. Chelsea were at times a pure joy to behold. The mini-sequence of short but effective passing in midfield in the lead-up to Hazard’s opening goal was a dazzling display of team understanding and also singular footballing capability.

Hazard’s finish was superb, and Chelsea were presented opportunities to end the game with a litter of chances that came afterwards. But Liverpool held on, didn’t panic, trusted in their ability; trusted mainly in their defence, with Joe Gomez and Virgil van Dijk along with keeper Allison already proving to be one of the best defensive cores in the division.

So when Jurgen Klopp made his third and final substitution in the 86th minute, and on trotted a player finding a little bit of form of late, the German coach must have done so with the thought that if Sturridge does make the difference, it could be a massive sign that this league may be theirs to lose.

This is because Liverpool’s top scorer last season and quite rightly the receiver of endless accolades and praise, Mohamed Salah, has not started strongly.

Granted, he has three goals to his name so far, and by this stage last season, he had five. Not a massive drop off, but it isn’t the goal tally that has fans worried. It’s the scuffed shots, the running down blind alleys, losing possession, the shot where the pass to a teammate is clearly the better option. It’s the fear the World Cup, and the pressure on him to return from injury and perform like he had for Liverpool last season and take Egypt as far into the competition as possible is affecting his performance now.

Yet Liverpool are now well trained in the ability to absorb the absence or even the departure of their previously best-performing player in recent years. Phillipe Coutinho, Luiz Suarez, remember those guys? Liverpool fans last season, as they watched their side tear defences apart with that devastating three-pronged attack, won’t have been doing too much thinking back and pining for the days of Suarez, the Uruguayan win-hungry galloping goal horse with his sublime movement and touches and his occasional mischief that had defences primed and ready to try and contain him and often failing.

They won’t have been longing again for the brilliance of the diminutive Coutinho, with his natural footballing technique and ability that those from South American countries say is given to each Brazilian as they are born. Now he and Suarez, both good friends, are playing together at Barcelona. Who could turn down the chance to play alongside Lionel Messi?

Neither departure left a particularly sour taste in the mouths of Liverpool supporters. In both cases, it was deemed inevitable to occur. It had the feel of a “thank you for everything, and good luck in your future endeavours” type separation for both.

Now, however, Salah’s free-scoring exploits of last season are still fresh in the mind. Fans still expect something spectacular when the speedy, swivelling Egyptian gathers the ball. It’s what he did with astonishing regularity just a mere couple of months earlier. It was in this very year that he was putting the ball in the net so often, and with such ease.

If Liverpool want to win the league, they will require a great deal of assistance from Salah. Perhaps he is still trying to shake off the disappointment of the summer, with Egypt failing to even win a game before crashing out of the World Cup without much at all to savour from it.

Maybe once Salah has his focus properly re-aligned, and he gets that white-hot energy back in his legs, that same energy that turned his legs to pumping locomotive pistons, violently chugging back and forth, sending the former Roma player beyond challenging defenders like they were running through thick sand, maybe then he will be more recognisable to his adoring fans.

But until then, Liverpool can now begin to lean on Daniel Sturridge a little more. Having been plagued with injuries in recent years, the England international now appears to have a little steel back in his eyes – as well as his bones. He’s looked focused, determined, but most of all, capable once again to do his job in this Liverpool front line.

It is funny to think that Sturridge is actually one of the few people left in this Liverpool squad who was with the club in 2014 when that famous title charge fell so agonisingly short. He was one of the main contributors to that side that took Manchester City all the way to the end, but ultimately his 22- goal tally wasn’t enough alongside Suarez’s 31 to claim their first title since 1990.

Sturridge has played a total of 25 Premier League minutes this season, with two goals to show for it. Having also netted the opener against PSG in Liverpool’s electrifying victory over the French title holders in the Champions League earlier this month, Sturridge is starting now to show his manager that he can be relied upon, and if he is on the pitch, he can score.

He helped Liverpool to second place in 2014, with just a couple of points separating themselves and City. Can he provide another fruitful contribution that maybe, this time around, will end differently?