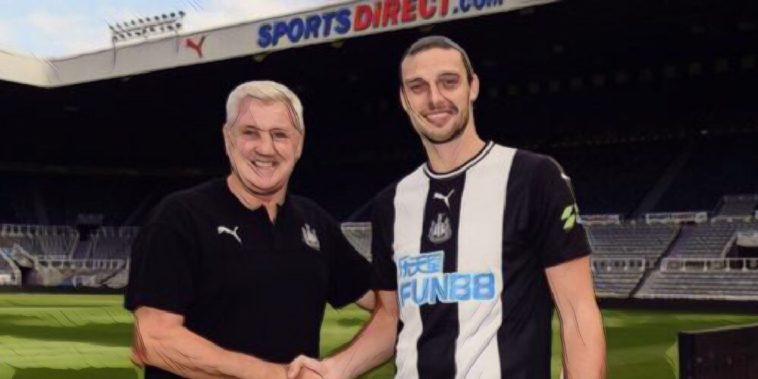 Steve Bruce says he is ‘delighted’ with Newcastle’s transfer business, and has discussed the return of the once ‘unplayable’ Andy Carroll to St James’ Park.

Newcastle were one of the busier Premier League sides on deadline day, completing deals for Amiens full-back Emil Krafth and an emotional return to the North East for England forward Carroll.

Carroll came through the youth ranks at the club, scoring 33 goals in 91 appearances for the Magpies before leaving for Liverpool in a £35m deal in 2011.

The 30-year-old has joined on a free transfer following his release by West Ham, signing a one-year deal with the club. Carroll is currently recovering having undergone ankle surgery earlier this year, though Bruce is hopeful he can return to full fitness soon as he bids to reignite his career following an injury-plagued spell.

“He was in first this morning. He is already running,” Bruce said at his pre-match press conference.

“When the club sold him he was the best pound for pound center-forward.”

Despite his torrid recent record with injury, Bruce believes Carroll has nothing to prove and hopes the towering forward can return to his ‘unplayable’ best.

“He does not have anything to prove as a footballer,” he continued.

“When he got the move to Liverpool he was unplayable. We hope to get a few glimpses of that.

“He is a mature Andy Carroll. When I spoke to him he only spoke about desire.”

Following the departures of Ayoze Perez and Salomon Rondon during the summer, Newcastle have strengthened their attacking options with the signings of Carroll and club-record buy Joelinton.

Bruce is confident he now has the attacking threat to trouble opposition teams, as Newcastle bid to improve on last season’s 13th-placed finish.

“You are always only as good as your strikers,” he continued.

“When we come up against the big teams, defensively we will have to be spot on.

“But we have to cause the other teams a threat, we have that threat now.”

The deadline day arrivals of Carroll and Krafth made it five new additions in the summer window. Joelinton’s £40m club-record arrival was the marquee signing, whilst the club also completed the signing of exciting Nice winger Allan Saint-Maximin and a loan deal for Dutch international left-back Jetro Willems.

Bruce admits he is delighted with the club’s business, the former Aston Villa and Sunderland boss believing the fans will ‘enjoy watching’ his new-look side.

“I couldn’t be any more delighted with what we’ve brought in. We’ve brought in some very good players who I’m sure the supporters will enjoy watching .”