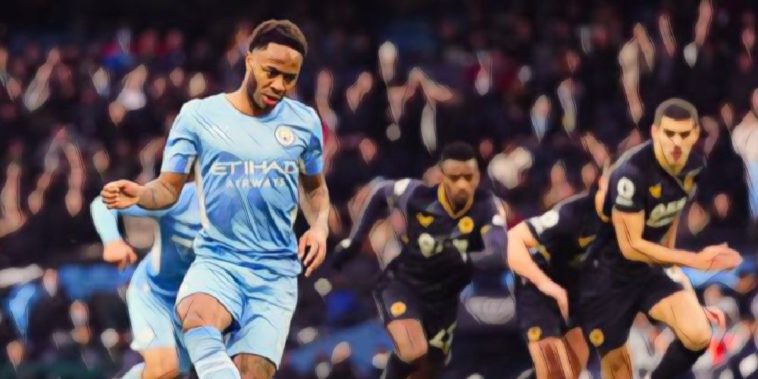 Man City moved four points clear at the top of the table, as a controversial Raheem Sterling penalty secured a tense 1-0 win over ten man Wolverhampton Wanderers at the Etihad.

Following what was a truly drab opening devoid of any real quality nor goalmouth action, the first real noteworthy moment came on the stroke of half-time, as Wolves’ talisman Raul Jimenez was dismissed in bizarre fashion.

The Mexican striker was initially handed a yellow card for a soft foul on Rodri on the halfway line, before receiving a second booking just seconds later for attempting to block the resulting free-kick, with that needless red undermining what had largely been a positive half for the visitors.

Despite dominating the first-half, Man City had struggled to really find a way through a stubborn opposition backline, although were seemingly frustrated not to have been awarded a penalty late in first-half stoppage time for a handball by Max Kilman.

After an improved start to the second half against the ten men, the champions were eventually awarded a spot-kick, albeit in controversial fashion, with Joao Moutinho penalised for handball despite the ball appearing to strike his armpit.

Amid the controversy, up stepped Raheem Sterling to convert from the penalty spot for his 100th Premier League goal, before he later teed-up compatriot Jack Grealish at the back post only for the summer signing to somehow fire over from close range.

With Pep Guardiola’s side continuing to probe for a second, they so very nearly squandered all three points at the death, albeit with Kilman failing to direct his header beyond Ederson.

Raheem Sterling bags his 100th goal in the Premier League from the penalty spot! ⚽

Having hung on for the win, that result moves City four points clear at the summit for the time being, while Bruno Lage’s side remain in eighth despite a valiant second-half effort.

Speaking afterwards, matchwinner Raheem Sterling said it was important to stay ‘patient’ against a ‘tight’ Wolves side, while describing his 100th Premier League goal as ‘a lovely achievement’.

“[Scoring 100 Premier League goals] is a lovely achievement. There are some fantastic players in that list. I’m really honoured to be in it now.

“We knew we had to keep patient. They kept it really tight, but we knew if we kept playing we’d get an opportunity – and we did.

“Wolves are always a difficult side to play against, home and away. Each game has its different challenges. We’ve always found it very difficult to break Wolves down and it was the same again today.

“We keep saying ‘next game’. That’s all we can keep doing. We need to do the same in midweek.”