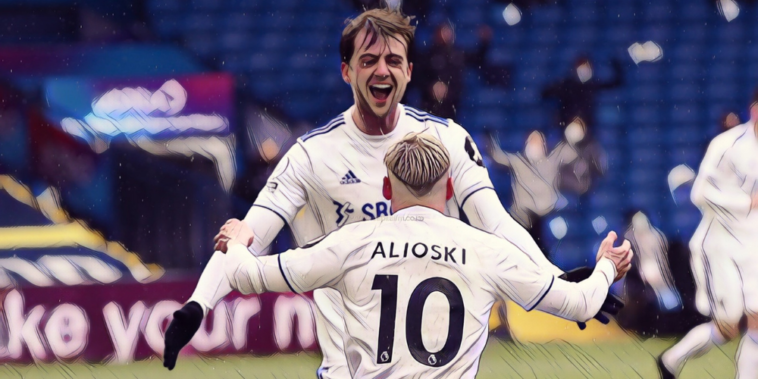 The latest round of Premier League action saw Newcastle stun Leicester to raise fears over another late season collapse for the Champions League chasing Foxes, the visitors producing arguably their best performance of the season to win at the King Power Stadium.

Manchester City’s Champions League final dress rehearsal with Chelsea ended in defeat, as Thomas Tuchel got the better of Pep Guardiola once again and extended the league leader’s wait to be crowned champions.

Elsewhere Liverpool took advantage of defeats for Leicester, Tottenham and West Ham to move closer to the top four, whilst Manchester United set a new record after coming from behind to incredibly win for a 10th time this season.

Each week we pick out some of the Premier League’s most impressive performers, here are seven players who shone this weekend.

Mike Ashley’s frugal ownership of Newcastle has meant that statement signings have been a rarity over the past decade, significant sums invested only occasionally in a bid to keep the wolves from the St James’ Park door.

Ashley dusted off the wallet to spend £20m on the signing of Callum Wilson from relegated Bournemouth last summer however, an investment that has paid dividends with the forward having been crucial in the Magpies’ bid for survival.

Wilson has added a cutting edge to a side often lacking attacking impetus this season, with the 29-year-old outstanding against Leicester to score twice in an impressive 4-2 victory.

Wilson’s double was taken in clinical fashion and took his haul to 12 league goals for the campaign, a fine return for a player who has suffered injury problems in his maiden campaign with the club.

Oh I do love playing awayyy! 🙌🏽

The summer signing has been involved in 42.5% of Newcastle’s goals this season despite missing nine games through injury, Wilson directly involved in 17 goals in just 22 starts for the often defensively-minded Magpies.

Wilson’s performance at Leicester helped Newcastle climb up to 14th in the division and his displays this season have shown what can be brought to the club if funds are invested correctly.

Chelsea came from behind to boost their top four hopes and extend Manchester City’s wait for the title, securing their second successive win against Pep Guardiola’s side.

It was a clash many billed as a rehearsal for the upcoming Champions League final between the teams and it was Thomas Tuchel who once again got the better of his opposite number, City’s decision to field a similar back three system failing to counter a formation which has suited the west Londoners perfectly in recent weeks.

Reece James produced an excellent display at wing-back for the Blues and dominated his duels down the right, the 21-year-old showcasing the athleticism and technical ability which make him one of England’s brightest prospects.

James made two tackles, won seven duels and created two chances in a complete wing-back display, listening to the constant instructions of Tuchel on the sideline and stating his case for more frequent selection.

James has all the attributes to be a fixture in this side if Chelsea can harness the best from him on a regular basis.

Ezgjan Alioski’s career with Leeds has had its fair share of ups and downs with the temperamental wide man dividing opinion, with last weekend’s performance at Brighton a low point as 29-year-old was hauled off at half-time.

The North Macedonia international bounced back in perfect fashion with one of his best performances in a Leeds shirt against Tottenham this weekend, the left-back involved throughout as Marcelo Bielsa’s side largely ran riot at Elland Road.

Alioski was calm and composed in possession – not always traits associated with his game – and provided a constant outlet out wide, bursting forward to tee up Patrick Bamford to restore Leeds’ advantage just before the break.

He combined well with Jack Harrison throughout and contained Gareth Bale in fine fashion, Alioski one of several star performers for Leeds with the likes of Bamford, Diego Llorente and Stuart Dallas amongst their best.

Based on this showing, the defender will be a loss to Leeds if allowed to walk away on a free transfer at the end of the season.

Emile Smith Rowe’s emergence has been one of the positives of a testing season for Arsenal and the midfielder continues to grow in influence for the north London side.

The 20-year-old returned to a central position against West Brom this weekend and starred alongside fellow academy graduate Bukayo Saka, the two combining brilliantly for the game’s opening goal as Smith Rowe netted his first in the Premier League.

Smith Rowe drifted dangerously and his intelligent movement saw him find space on countless occasions, his increasing importance to the side raising optimism ahead of next season as the Gunners look to improve under Mikel Arteta.

Always bright and inventive, Arsenal’s home-grown contingent has huge promise and should be the foundation upon which Arteta builds upon ahead of a crucial summer of recruitment.

Could Joe Willock join Smith Rowe in the Arsenal side next season?

The midfielder joined Newcastle on loan during the winter window in search of regular opportunities and has enjoyed a new lease of life at St James’ Park, adding energy and drive to the club’s midfield and playing a key role in the Magpies’ climb away from danger.

Willock has been freed of shackles by Steve Bruce and it has proven an inspired move, the 21-year-old’s third-man running having seen him net five goals in just eight starts including in each of his past four fixtures.

The England u21 international was a stand-out performer in the club’s 4-2 win at Leicester, his determined pressing robbing Caglar Soyuncu of possession before firing home to open the scoring.

Bruce has revealed his determination to keep the midfielder at Newcastle beyond the current season, but each impressive performance is only increasing his price-tag and making a permanent deal appear more difficult.

Leeds’ 3-1 win over Tottenham had no shortage of strong performances with each of Marcelo Bielsa’s side in fine form, with Patrick Bamford once again offering the perfect focal point for his side.

The 27-year-old’s work-ethic set the tone from the front and he was involved in much of Leeds’ best play, testing Hugo Lloris early on as the home side piled on the pressure.

Bamford’s pressing and link-up play has been an integral factor in Leeds’ impressive return to the Premier League this season and the best of the forward was evident again at Elland Road, including an intelligent piece of movement to find space and score his side’s second.

Bamford’s goal was his 15th in the Premier League this season and continued an excellent return to the top tier, the pre-season doubters now seeming a distant memory for a player pushing hard for an international call-up.

Everton’s win at top four rivals West Ham was one of the results of the weekend and crucial to the Toffees’ hopes of securing a place in Europe, Dominic Calvert-Lewin’s goal ending a run of just one win in their past seven Premier League fixtures.

Carlo Ancelotti opted for a back three formation and each of the club’s centre-backs impressed, the defensive trio protected brilliantly by an imposing midfield performance from Allan.

The Brazil international was one of the best players on the pitch as he anchored the midfield in fine fashion, breaking up West Ham attacks and distributing the ball efficiently throughout.

Allan symbolised a hard-working performance from his side and snapped into challenges throughout, victory at the London Stadium giving Everton a strong chance of playing continental football next season.