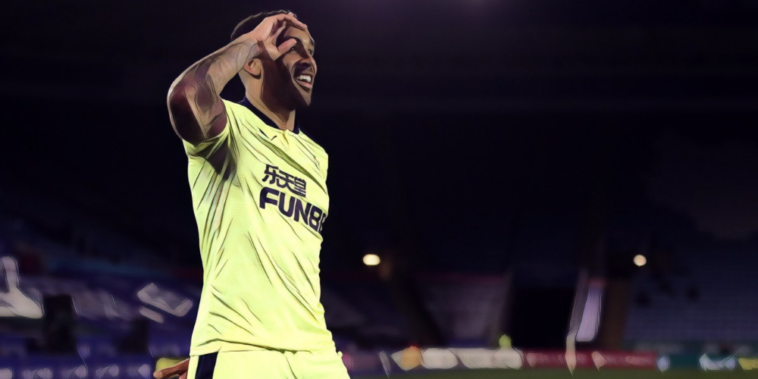 Manchester City’s wait to be crowned as champions will have to go on a little longer after suffering defeat to Chelsea in the headline fixture of the weekend’s action, with Manchester United strengthening their position in second with yet another come-from-behind win.

Elsewhere the race for Champions League football has heated up with hopefuls Leicester, West Ham and Tottenham all losing, whilst Liverpool moved closer to the top four after beating Southampton at Anfield.

There were some fine goalkeeping displays to choose from this weekend including Newcastle’s Martin Dubravka and Tottenham’s Hugo Lloris, but we’ve opted for Liverpool shot-stopper Alisson who looked somewhere back to his best against Southampton.

The Brazil international has dropped below expectations at times this season but produced a commanding display against the Saints, one which ensured the Reds kept a clean sheet and edged closer to a place in the top four.

He came out bravely to deny Che Adams from close range in the first half, before he later rectified one errant pass by saving from the same player to preserve Liverpool’s narrow advantage in the second period.

⭐️ Man of the Match, @LFC's Alisson
6 saves – the most he has made in any of his 96 PL apps
Ends a run of 7 home PL apps without a clean sheet pic.twitter.com/PIpqEPzNWK

Alisson has had his fair share of critics at stages of this season and rightly so, but this was a strong performance from the goalkeeper behind an inexperienced centre-back pairing and one that helped seal what could prove to be a vital three points in the race for Champions League football.

Chelsea‘s best player as the Blues secured victory in a Champions League final dress rehearsal at Manchester City, the wing-back dominant down his flank in an all-action display.

James thrived with the added freedom provided by a back three system and gave opposite number Benjamin Mendy a torrid time with his powerful running, winning seven duels, making two tackles and creating two chances for the west Londoners.

The 21-year-old is yet to secure an automatic place in Thomas Tuchel’s side but this was a performance which showcased what he can bring, a display against high-calibre opposition that will have been noted by Gareth Southgate as he chooses between England’s wealth of right-back options this summer.

Everton boosted their hopes of securing European football with a hard-fought 1-0 win at Champions League chasing West Ham, Dominic Calvert-Lewin’s goal proving the difference in a display of determined defending.

Carlo Ancelotti opted for a back three system with each of the central defenders impressive, though Ben Godfrey perhaps overshadowed his centre-back partners with a performance of now signature defensive aggression.

Godfrey has thrived in a number of positions this season and has proven an invaluable addition to the Everton ranks, the 23-year-old showing another string to his bow this weekend with a brilliant weighted pass to assist the only goal of the game at the London Stadium.

Undoubtedly one of Everton’s better players this season, he is another who can’t be far away from thoughts for a potential England call.

One of Leeds‘ best performances of the season and one that all but ended Tottenham’s hopes of reaching the Champions League, this was a fixture that showcased the best of Marcelo Bielsa’s side.

Leeds finished with a 3-1 victory at Elland Road but in truth could have had plenty more, with the likes of Ezgjan Alioski, Rodrigo and Patrick Bamford unfortunate to miss out on selection in our Team of the Week.

Selected at centre-back is Diego Llorente, who has become a fixture in the side since recovering from the injury problems that plagued his first half season in the Premier League.

The Spain international was solid and kept Harry Kane quiet throughout much of the contest, ensuring Leeds maintained their unbeaten home record against the ‘big six’ this season, fixtures which have seen Bielsa’s side concede just three goals.

Squeezing out the impressive Alioski for our left-back position is Bukayo Saka, who returned to the defensive role and produced a starring display in Arsenal’s 3-1 win over West Brom.

Saka has been arguably the Gunners’ best and most consistent performer across a testing season, with the teenager once again shining amid much mediocrity as Mikel Arteta’s side condemned West Brom to relegation.

Saka caused plenty of problems as he got forward at will and created opportunities, delivering a fine cross for Emile Smith Rowe to open the scoring at the Emirates.

The academy graduates combined brilliantly and have been a rare bright spark in a disappointing season for Arsenal, the duo two players Arteta must look to build around as the north Londoners seek to move forward.

Started wide on the right before moving centrally to overload the midfield against Tottenham, in all honesty, it matters little where Dallas is played given his ability to pop up all over the pitch.

The Northern Ireland international was central to another Leeds win and covered every blade of grass once again for the cause, arriving at the back post to open the scoring and creating problems throughout with his hard running style.

His all-action performance saw him make nine crosses, win five duels and win back possession on six occasions, in addition to scoring his eighth league goal of the campaign, another stand-out showing from a player enjoying an excellent maiden season at this level.

Joe Willock is relishing the chance to play regular first-team football after finding himself on the fringes at Arsenal, the on-loan midfielder scoring for the fourth consecutive Premier League game for Newcastle this weekend.

Steve Bruce has made no secret of his desire to keep the 21-year-old beyond the end of the season and it is not difficult to see why given his performance at Leicester, the Foxes unable to cope with the star’s youthful energy and third-man running from midfield.

Willock forced a mistake from Caglar Soyuncu before bursting forward to continue his scoring streak, his energy having added a new threat to the Magpies after being freed of shackles at St James’ Park.

Performances like this will only heighten Newcastle’s desire to keep hold of the loanee, though will also add to Arsenal’s reluctance to part with the academy graduate on a permanent basis.

Manchester United retained their reputation as comeback kings at Aston Villa on Sunday, becoming the first team in Premier League history to win 10 times after conceding the first goal in a single season.

Central to their success at Villa Park was Mason Greenwood, who has recovered from a difficult start to the season to hit form over the run-in, scoring five goals in his past five league appearances.

The teenager fired a warning sign at Emiliano Martinez’s goal with a clever step-over and low effort that was beaten away by the Argentina international, before getting himself on the scoresheet after easily turning Tyrone Mings before netting at the near post.

Greenwood’s goal was his 16th in the league for the Red Devils, a figure which sees him eclipse Wayne Rooney as the club’s highest scoring teenager in Premier League history.

Outstanding against Sheffield United for the second time this season, Eberechi Eze followed up his wondergoal against the Blades earlier in the campaign with another showing of his unique talents.

The home defence were well aware of the star’s dribbling ability after his sensational solo goal in the first meeting this season, but found themselves unable to stop the 22-year-old as he slalomed past challenges once again before teeing up Christian Benteke’s goal after just two minutes.

Eze’s direct style and ability to glide past challenges caused problems all afternoon and he got his reward by scoring the second goal in a 2-0 win at Bramall Lane, again running from inside his own half before getting some fortune with a deflected strike past Aaron Ramsdale.

On this form, there are few more entertaining players to watch in full flow than the summer signing from Queens Park Rangers.

So often the difference-maker for Everton this season, Dominic Calvert-Lewin’s latest goal could be his most crucial of the campaign to date.

One win in seven had threatened to derail Carlo Ancelotti’s side’s bid to reach Europe and the Toffees travelled to West Ham in need of a win, one that was secured following Calvert-Lewin’s clinical finish.

The England international worked tirelessly throughout and was rewarded for his industry with the game’s only goal, racing onto Ben Godfrey’s slide-rule pass before firing home.

Dominic Calvert-Lewin created more chances (3) and had more shots (3) than any other player against West Ham.

He was involved in 67% of Everton’s total shots and scored the only goal. ⚽️ pic.twitter.com/CPvuzt4n8v

It was the forward’s 16th league goal of an impressive campaign leading the line on Merseyside, with only four players having netted more in the Premier League this season.

Callum Wilson’s signing from Bournemouth last summer may just have been the difference in keeping Newcastle in the Premier League this season, the forward taking his tally to 12 league goals in an injury-hit season with a brace against Leicester this weekend.

Wilson has enjoyed an excellent debut campaign with the Magpies and was outstanding in the 4-2 win at Leicester, his pace and power a handful all evening with the star thriving on the counter-attack.

Leicester failed to deal with his movement and he took both of his goals in clinical fashion, food for thought for Gareth Southgate who has not called upon the star’s services since 2019.

Newcastle have rarely invested significantly in recent seasons but their £20m acquisition of the 29-year-old last summer has proven money well spent.

Read Also – Tactical Analysis: Why Graham Potter is a perfect fit for Spurs