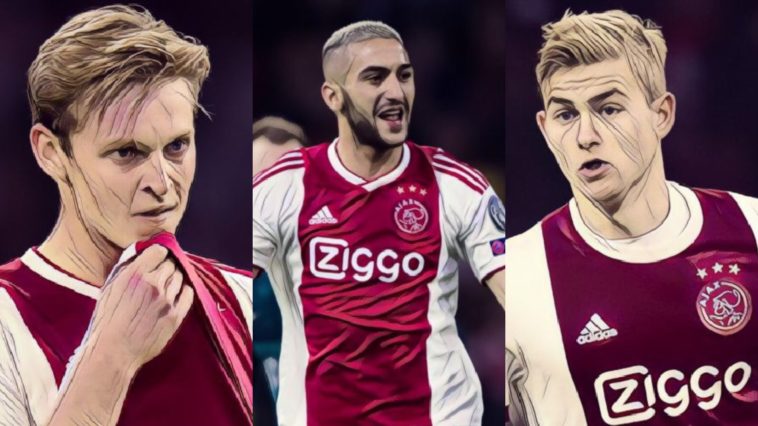 Ajax would prove to be the surprise package of last season’s Champions League, the Dutch side providing us all with some nineties nostalgia as their young side advanced to the latter stages in search of Europe’s biggest prize.

The Amsterdam side ultimately bowed out in dramatic circumstances to Tottenham Hotspur in the last four, though their exciting side captured the imagination of neutrals on a memorable journey that saw the club claim the scalps of Juventus and holders Real Madrid.

Many of Ajax’s finest talents would draw plenty of attention following their exploits, and we’ve decided to check in on how five of their stand out players from last year’s success are doing this season.

The club’s young leader drew admiring glances from Europe’s leading clubs following his performances last season, becoming the youngest ever captain in a Champions League knockout tie and scoring the crucial winner as Juventus were eliminated in the quarter-finals.

De Ligt would become the first ever defender to win the Golden Boy award in 2018 before picking up the inaugural Kopa trophy last year, going on to join Italian champions Juventus in a deal worth a reported €75m that summer.

The Serie A side beat off competition from the likes of Barcelona, Bayern Munich and Paris Saint-Germain to secure the highly coveted centre-back, but it has been a difficult adaptation for the youngster since making the move from the Eredivisie to Italian football.

De Ligt has struggled to find the confidence and composure that became so associated with his displays in an Ajax shirt, with speculation even linking the 20-year-old with a loan return to his former club after being dropped by Maurizio Sarri.

Merih Demiral’s long term injury has handed the Dutchman a route back into the side and he has started the club’s last four league fixtures, though his inconsistencies are a reminder of his age and need to develop as he bids eradicate the lapses in concentration that have been evident this season.

Ajax’s performances naturally attracted interest from across the continent and De Jong was another of their highly rated young talents to leave the club last summer. Barcelona secured a deal as early as January 2019 for a player who seemed perfectly suited to the Spanish side’s style of football.

De Jong remained with Ajax until the end of the season, playing his part in that run to the semi-finals and the capture of a domestic double, before heading to the Camp Nou to join an illustrious list of compatriots to have adorned the famous Catalan club’s colours.

The 22-year-old has enjoyed a mixed start since heading to La Liga, however, making 31 appearances in all competitions but largely failing to reach the high standards he set at Ajax the previous season.

The Dutch side’s head coach, Erik ten Hag, has criticised De Jong’s positioning since his arrival in Spain, the midfielder having largely operated in a more advanced role than he had been accustomed to in Amsterdam.

Ajax largely deployed two holding midfield players, though Barcelona’s usage of just Sergio Busquets in a sole holding role has pushed De Jong higher up the pitch, a move which has seen his defensive input decrease as he adapts to a different role.

Recent performances, including a goal against Real Betis, are signs that De Jong is beginning to adapt to his new surroundings, however, and the midfielder is likely to play a crucial role in the Barcelona midfield for seasons to come.

Ziyech starred during Ajax’s run to the latter stages of the Champions League, the winger’s sublime technique and expert delivery evident during some eye-catching performances for Ten Hag’s side.

Despite reported interest from several sides and a release clause of just £25m, he has remained at the club, but is continuing to produce performances that would mark him out as one of the most exciting talents outside of Europe’s top five leagues.

Since the start of last season, the 26-year-old has been involved in 47 goals in 47 Eredivisie games, scoring 22 goals and providing a further 25 assists at an average of 82 minutes per goal involvement.

Following another stand-out season from the Dutch-born Moroccan international he has finally secured his big-money move away from the Johan Cruyff Arena, as Chelsea agreed a deal this week to sign the winger at the end of the season in a deal worth €40m.

Ziyech’s proven record on the European stage could see that figure become a bargain as he becomes Frank Lampard’s first signing at Stamford Bridge, whilst the likes of Tammy Abraham will surely be eagerly anticipating the pinpoint deliveries the club’s latest addition will provide next season.

Alongside the likes of De Ligt and De Jong, Van de Beek is another to come through Ajax’s famed academy system and likely to form the spine of the Dutch national team in the coming years.

The midfielder made his mark on last season’s Champions League with his ability to ghost from midfield into advanced positions, notably scoring the winner in the first leg of the club’s semi-final against Tottenham and scoring four times during the club’s run to the last four.

After 17 goals in all competitions last season the 22-year-old has continued to demonstrate his eye for goal this time around with eight Eredivisie goals in just 19 appearances, whilst he has also provided a further four assists as European giants continue to circle.

Ajax currently lead the Dutch title race by three points from nearest challengers AZ Alkmaar, and Van de Beek will be hoping to help Ten Hag’s side to a second successive league title ahead of a potential summer departure.

Real Madrid have been strongly linked as they look to overhaul their ageing midfield options, whilst Manchester United are also credited as admirers for a player capable of making the step up to a major European league.

Dusan Tadic was regarded as a talented player during his four season stay in the Premier League with Southampton, but few would have imagined the heights the Serbian would reach last season following his departure from English football.

Tadic enjoyed a sensational campaign following his £10m move to the Johan Cruyff Arena, scoring 34 goals in all competitions including netting six times during the club’s run to the Champions League semi-finals.

The highlight of his campaign was a stunning individual performance as Ajax thrashed Real Madrid 4-1 at the Bernabeu, becoming just the ninth player in history to receive a 10/10 rating in notorious French football newspaper, L’Equipe.

Alongside his prolific goalscoring Tadic would also provide a further 17 assists, flourishing in a false nine role at the forefront of the Ajax attack. Following the best season of his career so far, Tadic has continued to shine this time around, scoring eight goals and providing a further 14 assists in just 21 Eredivisie appearances.

Unlike the others on this list, however, Tadic looks likely to remain at Ajax beyond the end of the season, with the Dutch champions set to witness the best football of the 31-year-old’s career in Amsterdam.

Read: The five players to win the most Player of the Month awards