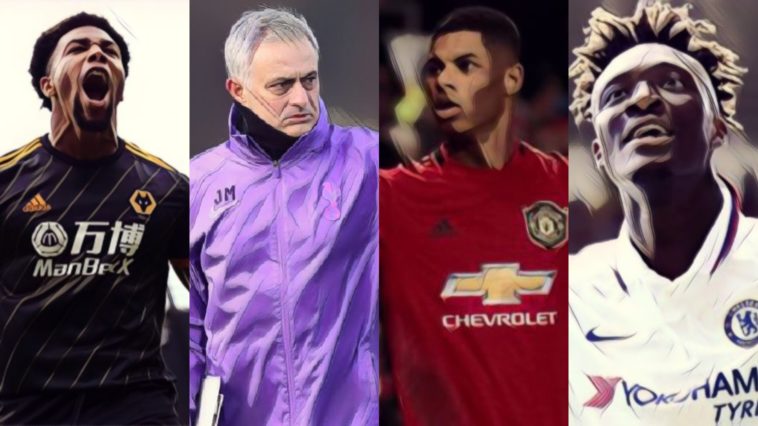 With the title race all but over already, we look slightly down the Premier League table to search for some drama and competition in the form of the top four race.

Champions League qualification is more important than ever to football clubs in Europe, as it can be the difference between a hefty profit or a deficit in the balance sheet, but it’s also important for a club’s brand and their ability to attract star players in the transfer market.

At the time of writing it’s still very much up in the air regarding who will make it or not, particularly the final spot. By our reckoning there are seven teams in contention, with just six points separating fourth from ninth.

We can safely assume Liverpool and Manchester City are going to comfortably finish in the top four, while we also reckon it would be a step too far for Arsenal. The Gunners, who are currently ten points behind the fourth-placed team with 13 games to go, would have to undertake a remarkable upturn in form to make it happen.

So out of those seven teams, who has the best shot at qualifying for the Champions League and who is just living a dream?

Assessing each contender in the Premier League top four race:

Leicester City, who are just two points behind reigning champions Man City, are all but there, but will have to keep the results ticking over if they are to ensure Champions League qualification. Their form has taken a dip lately, winning just two of the last five, with Jamie Vardy experiencing a dry spell while the defence has regressed somewhat.

The Foxes should be safe, but this season has been quite volatile so far; Southampton were mired in the bottom three after that record-equalling 9-0 defeat to the East Midlands outfit, but a few months later they were closer to the European spots than the relegation zone, while Watford have risen from the dead and have a puncher’s chance of staying up.

Aside from the points advantage, the big thing going for Leicester is that in order to miss out on the top four, two teams would need to go on a hot streak to overtake them. Given how no single team appears willing to go on a run, that seems very unlikely.

At one point during the season Chelsea were looking like shoo-ins for the top four. They were winning matches with their attacking style of play under new manager Frank Lampard, who had promoted a number of very talented youngsters, while the atmosphere around the club seemed to be pretty positive.

Then a number of things happened. The club had its transfer ban lifted, but didn’t sign any players, mystifying onlookers from the outside, especially given some of their injury problems of late. That’s another problem, which has partly been the source of an additional issue: goals.

Ten goals in their last six games isn’t a bad record by any means, but they haven’t come as easily since Christian Pulisic got injured, while Tammy Abraham has looked evidently unfit after recovering from a hip injury. The Blues often dominate the ball, but fail to create clear chances from their possession.

As a result, they have won just two of their last six encounters, which is positively mid-table form. If they continue on this trend, they won’t be returning to the Champions League next season.

I think we can now safely say that Sheffield United are going to stay up in their first season back in the Premier League. They are one point off the magic 40 point mark, but at this stage they’re looking up at the top four rather than down on the bottom three.

It’s a truly remarkable achievement by the Yorkshire club and their manager Chris Wilder, who has engineered a high performance level from his squad despite spending very little money on transfers. If it wasn’t for Liverpool’s incredible feats this year, then he would be manager of the year.

The question is: given how far they have come, how much further can they go? They have the least talented squad of the contenders, but they might be the best coached side outside the top two. This would have seemed impossible last summer, but now that they’re in this position, why not?

Top four might be a step too far for the Blades, but Europa League is within their grasp.

Tottenham Hotspur were on course for a car crash of a season after a poor run of performances which resulted in the sacking of their beloved manager Mauricio Pochettino. The Argentine was replaced by Jose Mourinho with a view to finally bringing success to a side who have been building towards that very end for years.

The new man has tightened up the defence, promoted youngster Japhet Tanganga, and bought PSV Eindhoven starlet Steven Bergwijn. The Dutch attacker scored a cracking volley on his debut in Spurs’ 2-0 win over Manchester City, which has given their campaign a huge jolt.

The Lilywhites are two points behind Sheffield United with a game in hand and they’ve got struggling Aston Villa up next. Assuming they win that, they’ll be one behind Chelsea. It is very much on for the North London outfit.

“Hey, look at us…” Everton say. “Who would’ve thought? Not me!” That meme essentially sums up the position the Toffees now find themselves in.

Just a few short months ago the Merseyside outfit, despite having a talented squad and playing decently well, found themselves at the wrong end of the table following a series of bad results. Out went Marco Silva, in came one of the greatest managers of the past two decades, Carlo Ancelotti.

Supporters could hardly believe their luck, but it was a sign of how serious the ownership are about launching the club into the top six that they got a three-time Champions League-winning manager. So far they’ve looked good under the Italian, and European qualification is by no means a pipe dream.

Everton‘s upcoming fixtures are really sticky – six of their next eight opponents are in the top half of the table – but if they possess the necessary mettle to compete for a spot at the top table, then they will come out the other side the better for it.

Up until the past month, Manchester United were looking like the best shout to catch up to Chelsea, but an injury to Marcus Rashford seems to have put any hope of that happening on ice. Odion Ighalo’s loan signing, although necessary, is unlikely to fill the void left by the Englishman’s absence.

The club’s form over the course of the season is their biggest obstacle; they’ve been unable to string more than two league wins together at any point and they are as liable to win any given game as they to lose or draw it. You wouldn’t be at all surprised if they won 13, drew 13 and lost 12 of their matches come the end of the season.

Consistency was always going to be hard to come by once manager Ole Gunnar Solskjaer and the hierarchy chose to lean into a rebuild and depend so heavily on youth. They might be better off focusing on the Europa League as a means of qualifying for Europe’s premier competition.

Wolverhampton Wanderers have recovered magnificently from their early season wobble to put themselves in contention for European qualification for the second year in a row.

Wolves appear capable of getting a result against any team not named Liverpool at the moment, but they may be sidetracked by their run in the Europa League knockout stages. On top of that manager, Nuno Espirito Santo prefers to stick to his tried and trusted, with his 20 players used the lowest in the league alongside Leicester and Burnley.

Despite being a ‘smaller’ club and having more games to contend with, the bookmakers like Wolves’ chances of breaking into the top quartile more than than they do Everton, so it will be interesting to see how that plays out at the end of the campaign.

Read: The clubs with the least money spent per point gained of the past five years