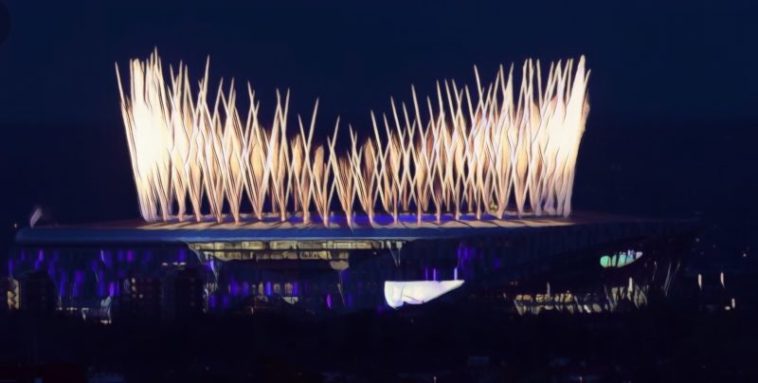 Don’t let the lack of imagination in the name put you off though, this stadium is the most spectacular build in recent times and will convince even the biggest skeptic of modern football that moving away from the old to embrace the new shouldn’t be feared but rather welcomed.

Scanning social media or speaking to anyone in your local pub about Spurs’ new stadium, you’ll find the opinions will vary, but there’s definitely a majority who can’t stomach the fact that Spurs bulldozed down White Hart Lane to move into this new super stadium. There is such a reluctance in the old school football fan to come to terms with anything that wasn’t a mainstay during the era they most identify with.

That’s not to say that every new invention introduced into the beautiful game is a success, but when you get it right – as Daniel Levy and Spurs have done on this occasion – there’s genuine hope that the game is going in the right direction.

With a capacity of 62,062 (the second largest in the Premier League), 17,500 seats in the South Stand, the UK’s largest single-tier structure, 65 food and drink outlets in the concourses and one microbrewery (the first of its kind), Spurs have created a place that is vastly different and without a doubt, superior to any other stadium in England.

The proximity of the stands to the playing pitch doesn’t leave any room for the argument that Spurs have sacrificed atmosphere in order to increase profits. The new South Stand can fit more people than the whole of Bournemouth’s stadium alone, and the fans are closer to the action than most grounds in the league. The only difference here is, when you go to the toilet at half time, the urinal won’t leak onto your Adidas Originals.

Among the other offerings at the Tottenham Hotspur Stadium, is a 180-bedroom upscale hotel as well as Sky Walk around the top of the stadium. Now, which fan wouldn’t be proud to call that their home on matchday? The answer is plenty but are Spurs going to experience exponential growth on the field of play and even in the trophy cabinet. Would there still be those out there willing to watch their team lose 1-0 to Port Vale while standing in a barn, just to keep the stadium the club has always played in?

While there’s no guarantee of an influx of trophies, there will be a guarantee of the world’s best players wanting to play at this stadium, should Daniel Levy make sure the price is right in terms of their wages. In fact, there are few more enticing options around Europe at the moment for players. Who wouldn’t want to live in London, challenge for the Premier League and Champions League, and play in what has been described as the best stadium in the world by Mauricio Pochettino?

The timing of this particular move may also aid Spurs in their quest for the Champions League title given the feel-good factor around the club has arrived at just the right time. There’s no easy path to the final in Madrid, especially with Man City lying in wait in the quarterfinals, but the positive is that quite a few of the teams left in the competition are locked in domestic title races that may take up most of their resources – the exception being Barcelona, who are 1/500 to win the league in La Liga betting. The next month could in actual fact be one of the golden ages of the club’s history if everything manages to fall into place.

What a feeling to play and win in our new home?? #COYS pic.twitter.com/Df5nLTBVaN

It’s been a long time coming, Spurs’ new stadium. It took 679 days from the last game at White Hart Lane, with a six-month delay from the initial opening date, before the Spurs players were able to walk out onto their new ground. You could go back even further than that to 2001 when Levy first stated his intentions to move home.

Now that Spurs have moved in, the entire image of the club has changed from that of punching above their weight to having well and truly arrived in the top ranks. Football fans will look on with envy, even the ones who say they won’t, as this once small North London club successfully transforms itself into one of the biggest clubs in world football.