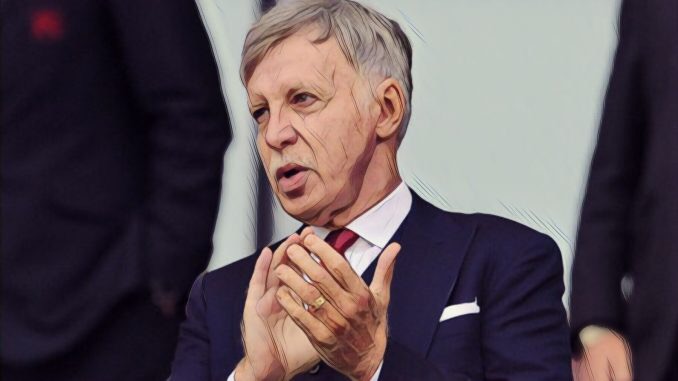 Arsenal are in line for a possible change of ownership, after Spotify owner Daniel Ek expressed his interest in buying the club from under-fire owner Stan Kroenke.

While the European Super League debacle came to a relatively swift conclusion following the ‘Big Six’ side’s withdrawal on Tuesday evening, the fallout of those club’s involvement in the proposal continues, as supporters lined the streets in protest this week at their owners actions.

Such a protest took place at the Emirates Stadium on Friday evening, prior to the Gunners eventual defeat to Carlo Ancelotti’s Everton side, with supporters voicing their desire to see current owner Stan Kroenke ousted.

The American businessman has never been a popular figure among fans of the north London club, the Los Angeles Rams owner having been criticised for a perceived lack of investment in the club, a fact that has played its part in the team’s decline in recent years.

With his reported involvement in plans for the much-maligned breakaway league adding yet more fuel to the fury, there have been suggestions that a change of ownership may be on the cards, billionaire Spotify owner Daniel Ek throwing his hat into the ring on Twitter this week.

As a kid growing up, I’ve cheered for @Arsenal as long as I can remember. If KSE would like to sell Arsenal I'd be happy to throw my hat in the ring.

According to the Telegraph, the 38-year-old’s declaration of interest is more than just a ‘public relations stunt’, with the Swedish entrepreneur and apparent Gunners fan is said to be ‘preparing a takeover bid’.

This news comes after Josh Kroenke, son of owner Stan and director at Arsenal, spoke to fans this week, the 40-year-old seeking to try and offer an explanation as to the Gunners involvement in talks for the so-called Super League, as well as insisting that his family have no intention of selling the club despite the breakaway fiasco.

Despite having no desire to sell, the report suggests that they ‘could be tempted’ by an offer of around £2billion, although with prospective owner Ek said to be worth around £3.4bn, he would likely need to place a bid as part of a consortium in order to replace Kroenke as the club’s owner.