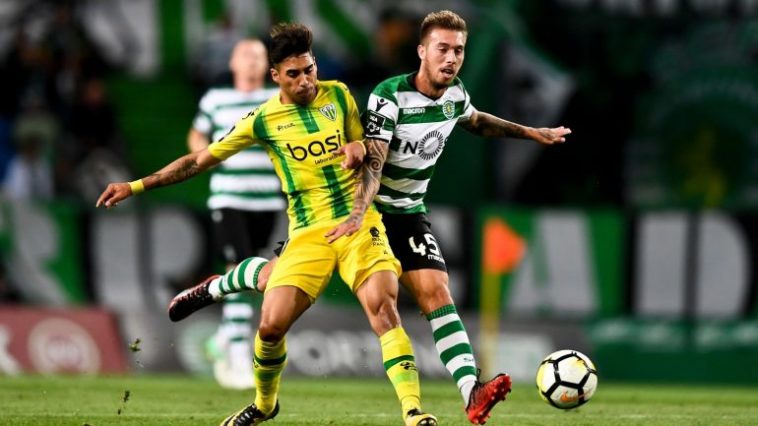 Sporting grant yet another win in a comfortable home match against Tondela.

Both Sporting and Tondela were nervous coming into this match. Although the Lions were the clear favourite, they were reminded of their last two games against this team, where they failed at getting a win.

Sporting, however, were determined to continue their amazing form this year, and so needed another victory.

The first minutes of the game were evenly contested, without any clear goal chances. The first goal arrived early though, showing itself 10 minutes into the match.

Iuri Medeiros was fouled and Sporting won a dangerous free kick, not far from the penalty area. Mathieu seized the chance to show he can do more than just defend. He surprisingly rocketed the ball into the top left corner, scoring a beautiful indefensible goal.

In the 23rd minute, a failed pass by the Tondela defense saw Dost grabbing the ball from half-way and sprinting towards the penalty area. He managed a great pass to Iuri Medeiros who curled it from the edge of the box, narrowly missing the goal.

In the last five minutesof the first half, Bruno Fernandes pulled off an extremely powerful shot, saved by Claudio Ramos. He wasn’t able to keep it though, and with the ball bouncing away from the keeper, Medeiros tried another shot on goal but hits the post. In the end, it turned out he was offside anyway.

The match proceeded until the referee finally signaled for half-time. The green team made their way to the changing rooms satisfied with their minimum goal lead, although knowing the game was far from over. Tondela hoped to come back fighting for a change in the scoreboard.

The second half started slowly and sluggishly and stayed like that for most of the game. During this period of time, both teams became mostly inactive in attack, although the underdogs were closer to causing an upset to Sporting.

The match finally livened up in the last 20 minutes. A game that looked like it had nothing left to offer suddenly shifted completely. Out of nowhere, Bruno Fernandes received a simple pass and unexpectedly turned quickly towards the goal. He struck the ball confidently and plunged it into the top right corner of the goal from an enormous distance. The Portuguese once again showed off his amazing long shot ability with this fifth outside-the-box goal this season.

From then on, Sporting continued to pressure up front, in search of a third goal. It nearly came to be, following a volleyed shot by Acuña that missed the back of the net by a whisker.

Barely a minute later, Piccini made a great cross on to Dost’s feet, but the striker missed the ball entirely.

A corner in the 10 remaining minutes of the game saw William Carvalho driving the ball on to what seemed like a certain goal. But a super save from Ramos stole Sporting’s chances of a third.

The Lions were awarded a second corner and, once again, William Carvalho found the cross. But, once again, the ball failed to meet the inside of the goal, charging directly into the post.

The referee eventually blew the whistle to end the 2-0 match. Tondela walked away fairly beaten in a game comfortably controlled by the home team.

Sporting continue to dominate in the domestic league with their sixth consecutive victory in six games.

The club currently stands in first place, three points ahead of Porto and five ahead of Lisbon rivals Benfica. However, Porto have yet to play their league match this weekend and Sporting are hoping they will finally slip up.