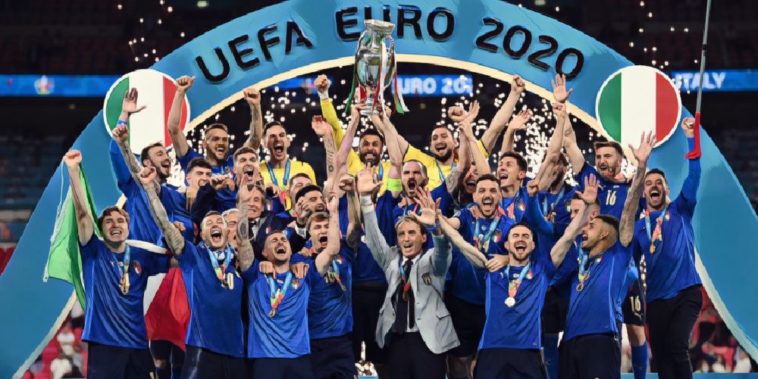 It was the oh so familiar feeling of penalty heartache as England’s dreams of ending their major tournament drought fell short, losing 3-2 in the shootout against Italy after the game finished 1-1.

England actually got off to the perfect start, Harry Kane dropping deep receive the ball before spraying it wide to Kieran Trippier. The Atletico Madrid full-back was afforded the freedom of north London – aided by Kyle Walker’s overlapping run – before floating in a perfectly weighted cross. The ball found Luke Shaw who got himself forward into the box unopposed, the Manchester United man catching a sweetly struck half-volley into the ground and past Donnarumma off the inside the post.

While England started the brighter, the Italians eventually got into their passing rhythm and were largely the better side toward the end of the first half and into the second, Jordan Pickford being forced into a low save from Federico Chiesa after the Juventus man was allowed time to drift into the box.

The Azzurri would eventually haul themselves level from a corner routine, a whipped delivery being flicked on at the near post to Verratti. The PSG man’s effort was well saved by Pickford who tipped it onto the post, but the ball bounced into the path of Leonardo Bonucci who poked home from close range.

WHAT A FINISH! WHAT A MOMENT! WHAT A TIME TO SCORE YOUR FIRST @ENGLAND GOAL!

THE PERFECT START! THE FASTEST GOAL EVER IN A EUROPEAN CHAMPIONSHIP FINAL!!! #ITAENG | #ITVFootball | #Euro2020 pic.twitter.com/wpNZAjOBE3

Italy continued to dominate possession, with England failing to really lay a glove on their opponents with the game going into extra time.

Gareth Southgate’s side were improved in the additional period, but neither side could find a breakthrough, and so it would go down to the dreaded penalty shootout.

Jordan Pickford would deny Andrea Belotti with the Italian’s second spot-kick, though Marcus Rashford would see his effort come back off the upright to level the scores once more. Soon to be Manchester United man Jadon Sancho stepped up to see his effort saved before Jorginho – who had the chance to win it – rather surprisingly saw his effort saved by Pickford.

It would matter little though as Bukayo Saka stepped up, only for his effort to be saved by the giant frame of Donnarumma to hand Italy a second European crown.

Speaking after the game, Southgate took responsibility for putting the young Arsenal man up for what turned out to be the decisive spot-kick.

“We prepared as well as we could for that and that’s my responsibility, I chose the guys to take the kicks,” he told ITV.

“We weren’t able to see out the game in normal regulation time. Italy showed what an outstanding side they are. They are 34 games unbeaten.

“Our players have done themselves proud, everyone of them has been exceptional. It’s the first time we’ve been to a final, we are unbelievably disappointed not to go that one step further.

“No-one is on their own in that situation. We decided to make the changes right at the end of the game and we win and lose together as team.”

Rashford and Sancho had only been introduced in the last minute of extra time before going on to miss their efforts, with some questioning Southgate’s use of substitutions, though the former defender insisted it had to be late.

“That’s my decision to give him that penalty so it is totally my responsibility: it is not him, Marcus or Jadon.

“We worked on it in training and that’s the order we came to. My call as coach.

22% – England have won just 22% (2/9) of their major tournament shootouts (World Cup/EUROs), the lowest ratio of any European nation to have been involved in three or more. Brutal. #ENG #EURO2020 pic.twitter.com/Ehfu5eur4N

“It is always the risk you run but they have been by far the best and to get all those attacking players on you have to do it late.

“It was a gamble but if we gambled earlier we may have lost the game in extra-time any way.”

Asked about the game itself, Southgate conceded his players lacked ‘composure in possession’ and and ‘kept inviting pressure’.

“We started well, our system worked well against theirs. We got the goal from the overload from the fullbacks high. We were bound to have a spell where they came into the game, they have outstanding players.

“We didn’t keep the ball well enough in that initial period in the second half. We changed the shape to try get a bit more of a grip. That was the area of the game, our lack of composure in possession that turned the game. We were defending ok, but because we kept giving the ball away, we kept inviting pressure.”

See also – Five of the most memorable European Championship finals ever

Gareth Southgate has failed England again with his tactics and selection , England would won the game in the second half of the game with the caliber of players on the bench. We need an attacking minded manager please. Thanks

A lame excuse by Southgate for an inexperience selection, to defend.