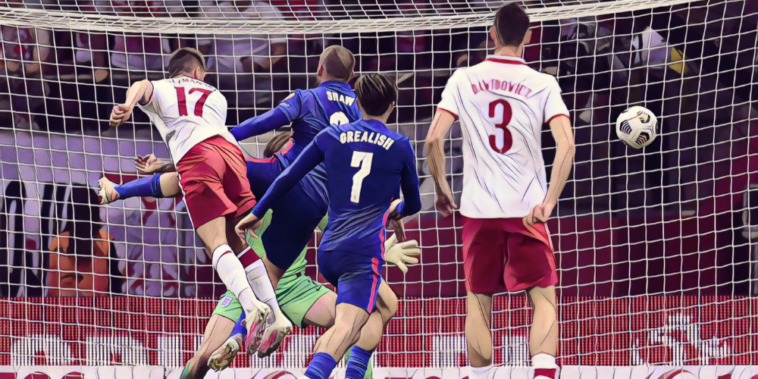 Gareth Southgate has defended his lack of substitutions after England conceded a 92nd-minute equaliser to draw with Poland in World Cup qualification.

England had looked on course to secure a victory that would move the Three Lions a huge step closer towards qualification for Qatar 2022, but Damian Szymanski’s header cancelled out Harry Kane’s superb strike for the visitors in Warsaw.

The equaliser came following mounting pressure from Poland in the closing stages, with Southgate’s decision not to turn towards his substitutes raising questions following the disappointment of a stoppage-time set-back.

The England manager has defended his decision not to make changes to his side however, insisting the Three Lions were in ‘total control’ for much of the contest.

“We were in total control and to bring players into that moment when everyone was performing to a good level and we were controlling possession, that can put players in who have had to sit in the stands and that’s not so easy.

“There were a couple of times when we looked at it but we were doing well, no problems. We were going to refresh the wide players to run the clock down but we conceded before we could get them on. That is not a good moment then to make changes.”

England currently top Group I with 16 points from six fixtures, four clear of second-place Albania and five ahead of Poland ahead of fixtures against Andorra (away) and Hungary (home) in October.

The World Cup qualification campaign is concluded during November’s international break with clashes against Albania at home and a trip to face minnows, San Marino.

Read – Opinion: Why the Harry Kane saga acted as a perfect smokescreen for Spurs summer of progress