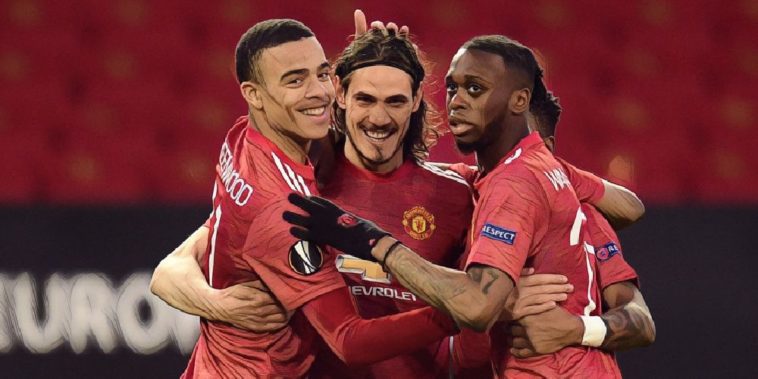 Manchester United set up a tasty Europa League semi-final clash with AS Roma, after breezing past Granada courtesy of a 2-0 second-leg win at Old Trafford on Thursday night.

After their 2-0 away victory in the first-leg, the Red Devils passage to the semi-final’s appeared relatively straight forward, although they were forced to make do without usual starters Scott McTominay, Luke Shaw and captain Harry Maguire, all of whom were absent through suspension.

United had claimed an impressive 3-1 win over Tottenham last time out and took that form with them into the opening few minutes, two of Sunday’s star performers combining to give the hosts the lead. Skipper for the night Paul Pogba’s delightful backwards header found Edinson Cavani, the veteran marksmen duly rifling home on the volley with his weaker left foot, after having been afforded far too much time and space inside the penalty area.

Despite facing a seemingly insurmountable deficit, the La Liga side reacted positively to going behind, on-loan Manchester City man Yangel Herrera with a couple of headed efforts that went agonisingly wide of the post, while at the other end Bruno Fernandes fired a volleyed effort over the bar near the end of a fairly sluggish half for the hosts.

To their credit, the visitors continued to threaten at the start of the second period, while United also had chances of their own, both Mason Greenwood and Edinson Cavani failing to find the back of net with headers after working space inside the penalty area.

Much like the first-leg, the Red Devils weren’t quite at their best in the second-half, yet managed to grab a second in the 90th minute, Alex Telles’ cross being directed into his own net off an unfortunate Jesus Vallejo, the goal coming less than a minute after David De Gea had denied another Herrera header from close range.

That comfortable 4-0 aggregate win means United are through to their fifth semi-final since Solskjaer took charge, the Norwegian seemingly pleased with getting the job done against a tough opposition.

“Granada do give you a game. It’s a physical game, they throw people forward. You have to defend in these kind of games,” he told BT Sport.

On a relatively comfortable night at the Theatre of Dreams, one potential concern was Paul Pogba, the World Cup winner running the risk of a suspension after picking up an early booking, that fact leading to his half-time substitution.

“Sometimes, Paul wants to win so much,” the Norwegian said. “He went into a couple of tackles after his yellow card but I thought I don’t want to risk that [him being sent off] even though he played so well. We missed three today [through suspension]. The season has been hard enough as it is.”

The Red Devils are the bookmakers favourites to win the Europa League where they could potentially meet Arsenal in Gdansk. However, Solskjaer said that their semi-final clash against Roma has the hallmarks of a ‘proper European tie’ – the two sides having met on numerous occasions in the Champions League, and featuring the likes of Edin Dzeko, Chris Smalling and Henrikh Mkhitaryan.

“I’ve not seen too much of them,” Solskjaer said of the Italian. “I knew they played two good games against Ajax. They defend well, as Italian teams always do. We all know Edin Dzeko so every ball into the box is a dangerous one.

“We are looking forward to it. We’re in the semis. It feels like a proper European tie because Roma is a club with lots of history. We’ve done well against Italian sides before.”

18 – Manchester United have reached their 18th semi-final in all European competition (inc. Fairs Cup) – only Liverpool (19) have appeared in more amongst English sides. Dream. pic.twitter.com/K9N23ZdOVf

“We’re going into it hoping to get to the final. If we can finish the season with a trophy that’d be great.”

The first-leg advantage afforded Solskjaer to also hand a rest to usual ever-present, Marcus Rashford, although the Englishman could well be fit for United’s next game against Burnley this weekend.

“We hope he’s going to be ready,” he said. “Today was about not risking him. He was on the bench just in case because you never know in a knockout tie. He’s been playing with a sore foot. I don’t know yet.”