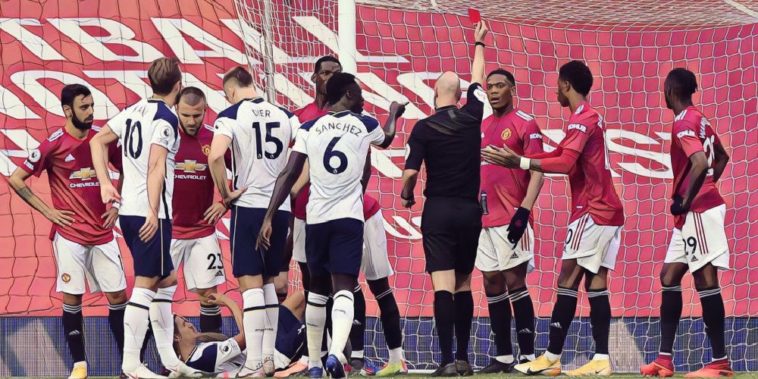 Manchester United were ripped to pieces by a ruthless Tottenham Hotspur side, as Jose Mourinho’s men hit his former club for six.

It was a frantic start at Old Trafford, Manchester United – virtually straight from the kick-off – advancing into the Spurs box and being handed a penalty as Davinson Sanchez clumsily brought down Anthony Martial, with Bruno Fernandes stepping up to maintain his 100 per cent record from the spot since his January arrival in the Premier League.

However, within two minutes of the opener, Spurs were level, an awful passage of defending from a throw-in – particularly from Harry Maguire – allowing Tanguy Ndombele to nip in and stab the ball home from close range.

Ridiculously, in the seventh minute, Jose Mourinho’s side had the lead. Maguire brought down his England colleague Harry Kane, only for the Spurs striker to play a quick free-kick to release Heung Min Son, the South Korean racing through before poking it past the advancing David de Gea.

Just as the game started to settle down, the drama cranked back up once more, Martial being sent off for a petulant reaction in a tussle with Erik Lamela, though the Argentine should probably have seen red for his part in the incident too. Within two minutes of the Frenchman’s dismissal though, the Red Devils were 3-1 down. A sloppy ball from Eric Bailly was intercepted by the sharp Harry Kane who played it out to Son, before he squared it back to his unmarked strike partner who despatched the ball into the bottom corner with just 30 minutes on the clock.

Eric Lamela puts his arm to Anthony Martial's face in the box before the Frenchman retaliates and is sent off! 😲🟥

Have #THFC got away with one there?

Spurs were playing their fourth game in a week but you really couldn’t tell, and seven minutes later, and after some more awful defensive positioning from Manchester United, they extended their lead, Heung Min Son bagging his second of the game from close range following a low cross from Serge Aurier down the right.

Ole Gunnar Solskjaer made two changes at half time, though it made little difference, Spurs extending their lead within five minutes of the restart as Serge Aurier found himself in yards of space down the right before firing low across De Gea.

A miserable afternoon continued to get worse as Paul Pogba inexplicably went to ground in the area to bring down full-back Ben Davies, with Kane emphatically blasting the resulting spot-kick past De Gea to make it six.

Speaking afterwards, Ole Gunnar Solskjaer couldn’t hide his frustration at the reaction of Lamela for his part in Anthony Martial’s sending off, but was unable to come up with too much of a defence for his side’s dismal display.

Man Utd have lost each of their first two home games of a Premier League season for the first time in the club’s history.

Ole is at the wheel. 🚗 pic.twitter.com/juJLVyqrTN

“It is the worst day of my career as Manchester United manager and the worst day for all of them as United players,” Solskjaer told BBC Sport.

“It is not the worst day in Manchester United history, we have bounced back before.

“To explain now is quite difficult. We have been beaten 6-1 at home by a very good side but we have contributed a lot to our own downfall.

“The red card makes a lot of difference but Anthony Martial, well done for staying up when he was struck by the arm of Erik Lamela, you don’t react but he hit his throat with two fingers, gave him a little slap and Lamela must be having an operation. If that was my son, I know what I would tell him. Anthony knows he should not react like that, the good thing is he did not go down but if he did maybe the other lad would be sent off.

“I know the boys wanted to and they made an effort but making mistakes, everyone makes mistakes and today we made loads in the same game. That shows in the result.”

United are close to completing the signings of Edinson Cavani and Alex Telles, while they still retain hope of signing Jadon Sancho – though on this showing you really wonder why they aren’t prioritising more defensive acquisitions.

“We have to address what we have,” said the Norwegian. “The players there are better than what we are showing and we have to come out fighting as a group. Any transfer updates, the window closes tomorrow night, then we will know.”

The result leaves Manchester United with just three points from their opening three games, while Spurs climb to fifth having played a game more.

See also – Tweets of the Week: Slapstick football, Dier need for the loo, and Mourinho vs Lampard