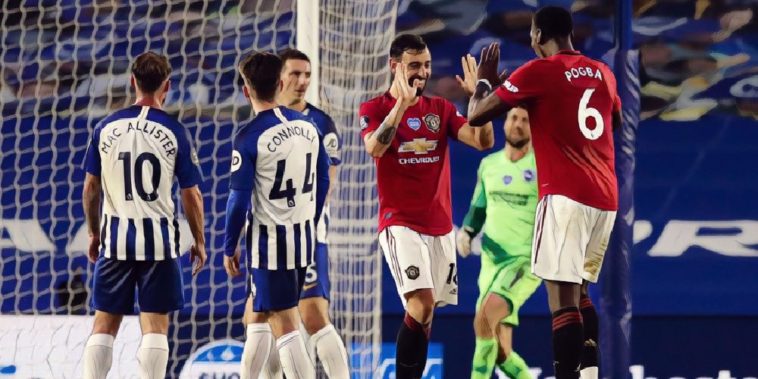 Manchester United breezed to a 3-0 win on a damp evening on the South Coast, comfortably dispatching of Brighton at the Amex.

The Red Devils came into the game on the back of a lockdown-spanning 14 game unbeaten run, and they quickly set about extending that to 15 in what was a totally dominant first-half performance against Graham Potter’s side.

Impressive teenager Mason Greenwood netted his 13th of the season in typical fashion, cutting in from the right in the 16th minute, before firing expertly into the bottom right corner with his left foot in what is becoming somewhat of a trademark goal from the Manchester United academy graduate.

13 minutes later, and the game already looked over; Bruno Fernandes receiving the ball from Paul Pogba before firing past Matt Ryan in the Brighton goal, though the January signing’s effort from the edge of the box took a huge deflection on its way in.

United had dominated the ball throughout the first period, and the Seagulls did come out with a renewed purpose in the second half in search of getting back into the game, however, their bravery was quickly punished as United sprung a devastating counter-attack five minutes after the restart. Harry Maguire’s headed clearance finding Nemanja Matic, whose wonderful hooked pass found Greenwood racing down the left, before the 18-year-old floated a delicious cross into the path of the onrushing Fernandes who smartly fired home on the volley.

Brighton did continue to press forward, with David de Gea making a couple of smart saves, before United made a late push for more goals, and speaking after the game, Ole Gunnar Solskjaer was delighted with his side’s performance, picking out Greenwood for particular praise.

“The boys played some exceptional stuff,” Solskjaer told Sky Sports. “It’s always hard to play against Brighton, but we pressed well and we started really well. We ere just waiting for a moment to get a goal, and Mason’s first goal was brilliant.

“He played fantastically. He’s a special kid, we know when he gets faced up, looking forward, he looks dangerous. His link-up play was great today.

“He’s got a knack of that, he can go inside or outside. He is just as good with his right foot as he is with his left. He is developing into a fine player.

“We know we have pace and we want to counter quickly, great pass by Nemanja, great cross by Mason, and fantastically finished by Bruno, we are very happy with it.

The result moves Manchester United back into fifth, two points behind Chelsea and three behind Leicester who both play tomorrow, though Solskjaer was unconcerned about ‘making a statement’ to their Champions League chasing rivals.

“I don’t care about making a statement, I know we are a good team. We will recover and then focus on the next one.”