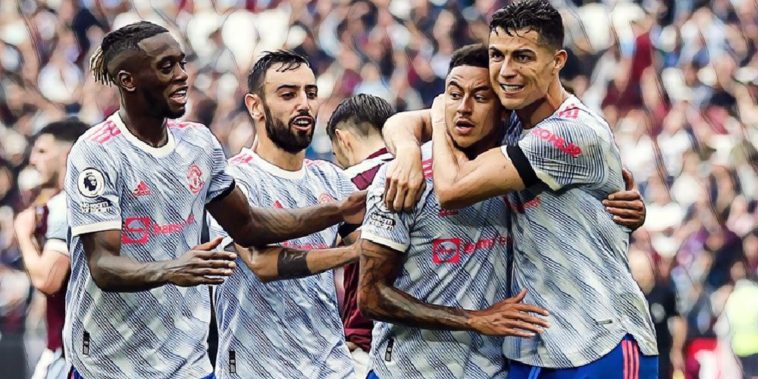 Jesse Lingard and David de Gea would prove to be the late heroes as Manchester United came from behind to beat West Ham in dramatic circumstances.

The game got underway with early domination of the ball from Manchester United, though the first real clear cut opportunity of the game would fall the way of West Ham – Harry Maguire getting caught in possession near the touchline, only for Raphael Varane to block Jarrod Bowen’s effort from inside the box.

That effort seemed to give the home side and their fans a lift, with the Hammers starting to get on the ball more, although they would have ‘keeper Lukasz Fabianksi to thank for keeping the scores level at the other end as the Poland international made a smart fingertip save to tip a left-footed Bruno Fernandes volley onto the post.

West Ham would however take the lead in the 30th minute, Jarrod Bowen laying the ball off to Said Benrahma at the edge of the box before the former Brentford man’s attempt to curl it beyond David de Gea took a wicked deflection off Varane to leave his ‘keeper flat-footed.

The goal saw United up the tempo and they would quickly get back on terms as that man Cristiano Ronaldo made it four goals in three games since his return to the club. The Portuguese timed his run to perfection to get on the end of a delicious Fernandes delivery from the left, and while Fabianski kept out Ronaldo’s initial effort, he couldn’t keep hold of the ball with veteran forward tucking home the rebound from close range.

The second half got underway and it was virtually one way traffic from the off, the Hammers looking sloppy in possession as the visitors looked to turn the screw.

Despite all their possession though, Ole Gunnar Solkjaer’s side rarely looked like getting in front for large parts of the second half. However, the game would spark into life in what was a dramatic final five minutes.

Having been responsible for the slack backpass that cost his side a point in Bern in midweek, former West Ham loanee Jesse Lingard would be called off the bench to somewhat predictably snatch what looked like a late winner. Receiving the ball on the left of the area, there looked little on for the 28-year-old, who opted to cut in onto his favoured right before rifling an unstoppable strike into the top corner.

United saw three penalty appeals waved away during the game, the last of which looked clear for a foul on Ronaldo, though deep in stoppage time, it would be West Ham who were be handed the chance to equalise from the spot following a Luke Shaw handball. Mark Noble was brought on a substitute with the sole purpose of taking the penalty, only for David de Gea to make his first spot-kick save in the Premier League since 2014.

Man Utd have won more points from losing positions than any other team both since OGS’ appointment [52] and since the start of last season [35].

Speaking after the game, Ole Gunnar Solskjaer was critical of his sides defending for West Ham’s opener

“It’s always difficult coming here against a West Ham team that’s very well organised,” he told Sky Sports. “They are on their longest unbeaten run in the Premier League ever, so we know we have to stamp our authority [on the game]. First half, 60-70 per cent possession for us. Yeah, they get the first goal, but still, I feel you just have to wait for it to open up.

“You can’t take rests when you defend, we dropped back into a back six, too many spaces, too late to charge the ball, and we spoke about that at halftime. Second half, great response, and that was the big thing for me, how do we react when we go 1-0 down and it was a good five minutes for us.”

Asked about the three penalty shouts from his side, Solskjaer felt his side should have had two. “The first and the last. I think they are stonewall, you can’t even argue against them,” he said.

“First one, the lad puts his foot out and Cristiano trying to run straight, and he’s fouled. Last one…Paul [Pogba] had a foul against him on Kurt Zouma, he didn’t touch him but he went over him, so why is Cristiano’s third appeal not a penalty? Hopefully it won’t be that Cristiano is never going to get a penalty.”

The Norwegian was clearly delighted for goalscorer Lingard following his error in the Champions League.

“Great goal, so happy for Jesse,” he said. “He had a tough evening on Tuesday. But he’s knuckled down, worked hard, has been the same bright, positive lad, and what a goal. So happy for him.”

Meanwhile, he was impressed with the attitude of De Gea, a ‘keeper who had looked like he had been deposed as Manchester United’s number one at the end of last season.

“He’s a different man! He asked to come back early for pre-season. He wanted to show how good he is, and he’s saved us two points today.”

Asked what he was impressed about, Solskjaer took the opportunity to reiterate his desire to improve defensively: “[I liked] The attacking football, the movement,” he said. “We have to work better defensively, no doubt about it. First half, we were too easy to play through and it’s something we will work on because there’s no rest bite on the pitch when you play football.

“We know how difficult it is to play here and West Ham are one of those teams that will be challenging up there.”

The two sides go head to head once again in midweek, with David Moyes’ side travelling to Old Trafford in the Carabao Cup on Wednesday night.