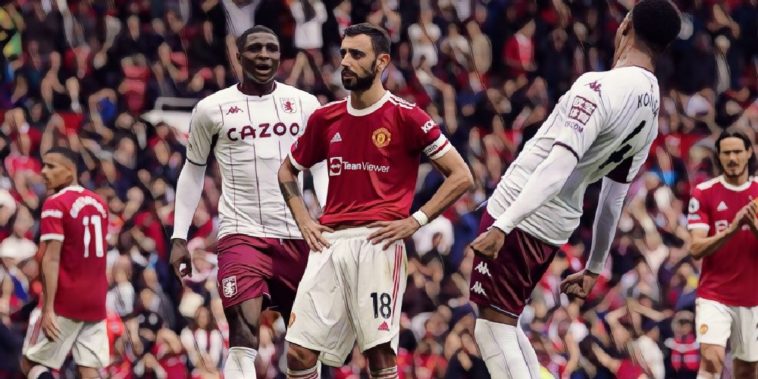 Kourtney Hause score a late header and Bruno Fernandes missed a stoppage-time penalty as Manchester United suffered a first Premier League defeat of the season with a 1-0 loss at home to Aston Villa on Saturday.

Having slipped up against West Ham United in the Carabao Cup on Wednesday night, Ole Gunnar Solskjaer unsurprisingly reverted back to the side that overcame the Hammers in the league at the weekend, with Edinson Cavani also returning to the substitutes’ bench.

In an even first-half, it was the visitors who undoubtedly had the best of the chances, with Matt Targett blazing over at the back post from close range, before Ollie Watkins almost capitalised on a defensive mix-up, only for last week’s hero David De Gea to recover well to deny the Englishman.

Villa defender Ezri Konsa then went close with a header from a corner, while United’s best chances of the half came just before the break, captain Harry Maguire seeing his header well saved by Emi Martinez, before Paul Pogba glanced a headed effort wide.

The away side went close again after the break with Watkins’ effort parried away by De Gea, with Mason Greenwood squandering a number of half chances up the other end as Solskjaer’s men struggled to really lift their performance in front of an expectant Old Trafford crowd.

United were finally made to pay from an 88th minute corner, defender Kortney Hause beating his man at the near post to head past David de Gea.

With the game entering stoppage time United were gifted the perfect opportunity to get back into the game from the penalty spot, after goalscorer Hause’s handball, only for the typically composed Fernandes to blaze his effort over the bar.

That costly defeat is a third loss in just four games for Manchester United in all competitions, with Solskjaer left ruing what he believed to be a missed offside in the visitors’ late winner, the Norwegian believing that Ollie Watkins had obstructed De Gea in an offside position as the header went in.

Ole Gunnar Solskjaer was not happy with Aston Villa's goal as he felt it was offside pic.twitter.com/0XUO4aFyNC

“You can take it when it’s a good goal conceded against you, but that’s offside,” he told Premier League productions. “He’s touched David as he heads the ball. How that’s a goal and Leicester have not got their goals [against Brighton], I just can’t see the consistency and that’s clearly offside.”

The United boss had complained at the lack of penalty decisions his side had had of late in the build-up to the game, yet when gifted a potential route back into the game from the penalty spot late on, talisman Fernandes blazed a woeful effort over the bar.

“I’ve not seen it because it ended up with nothing anyway so I can’t comment on that one but unfortunately we missed the chance to get a point.”

The Portugal international saw his spot-kick delayed as Villa players surrounded the referee and kick-taker, Fernandes, something which Solskjaer believed was unjust.

“I wasn’t going to mention it but it’s not right that they do that. I guess that should be a yellow card for someone but they have achieved what they wanted.”

Asked about his side’s actual performance, Solskjaer questioned his side’s decision making, with only four of their 28 attempts being on target.

“We were very aggressive, very good on transition, got forward quickly but the final shot, final pass and final decision wasn’t always the best one. 20 of the 30 attempts were blocked.”

That defeat ensures back-to-back losses for United after a fairly dismal week at Old Trafford, with that form increasing the pressure ahead of their midweek clash with Villarreal.

“Big game. Champions League. We need to pick up points which is a position these boys have been in before. I know they will fight for each other and fight for the shirt and we will be ready for that one.”

See also – FIFA 22: Five of the best teams to try on Career Mode