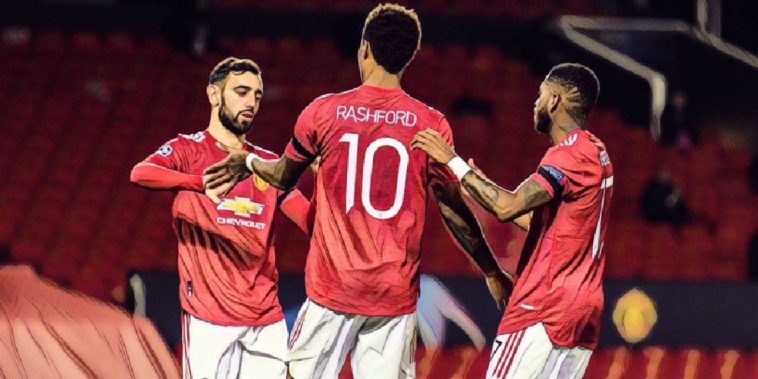 Manchester United put themselves on the brink of the Champions League knockout stages with a 4-1 victory over Istanbul Basaksehir.

United lost the corresponding fixture in Istanbul three weeks ago, though started brightly this time out, and after just seven minutes they were ahead in stunning fashion. An Alex Telles corner was only partially cleared, the ball dropping straight into the path of Bruno Fernandes who smashed an unstoppable half-volley into the roof of the net from the edge of the box – a strike reminiscent of former United favourite Paul Scholes.

The Red Devils saw a tidy Marcus Rashford strike chalked off for offside in the 11th minute, but eight minutes later they did double their tally, Basaksehir ‘keeper Mert Gunok spilling a Telles cross, the ball again dropping at the feet of Fernandes who simply tapped home into an empty net.

Rashford won and converted a 35th minute penalty to make it three, with Fernandes unselfishly handing the England international the ball despite being on a hat-trick,

The second period saw a much more pedestrian pace to the game as Manchester United sat back on their lead, and with 15 minutes left to play, the Turkish side pulled a goal back with a fine free-kick from Deniz Turuc, and despite David de Gea clawing it out, goalline technology showed the ball to have crossed the line.

The visitors rattled the bar and created a number of half-chances in the closing minutes as Solskjaer’s side appeared to have taken their foot off the gas a bit too much.

However, as the game entered stoppage time United re-established their three-goal cushion, Mason Greenwood leading a breakaway before squaring it to fellow substitute Dan James, who netted his first-ever Champions League goal.

“I felt first half we saw the intent straight away, they wanted to play and they enjoyed it,” he told BT Sport. “It’s a Champions League night at Old Trafford, you’d expect them to enjoy themselves. We scored some very nice goals, I’m pleased.”

The Norwegian handed starts to summer signings Donny van de Beek and Edinson Cavani, the pair impressing – particularly in the first half – despite their limited opportunities since their arrivals at Old Trafford.

“The two are getting used to how we want them to play – Donny can play in different positions and Edinson is a good old fashioned number nine and we haven’t had that for a while and I was happy with how Anthony [Martial] played off the left.”

FULL-TIME IN THE CHAMPIONS LEAGUE 🤩

The result, coupled with PSG’s 1-0 win over RB Leipzig means that United now just need one point from their remaining group stage games, though the former striker is keen to secure top spot.

“We need one point, but of course we want to be top of the group but we’ll take it one game at a time.”

Next up is an away trip to the South Coast to take on a high-flying Southampton side before facing PSG at Old Trafford next week.