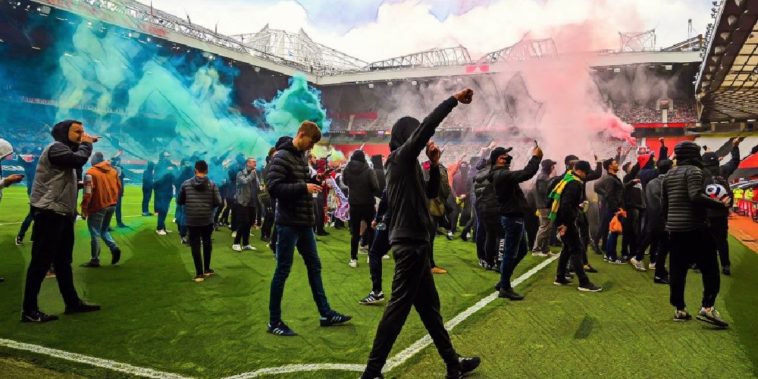 Ole Gunnar Solskjaer has opened up for the first time about Sunday’s protest by Manchester United supporters at Old Trafford.

United’s fixture with Liverpool in the Premier League was postponed on safety grounds after a number of supporters protested against the club’s ownership, with fans breaking into the ground and pitch in a demonstration against the Glazer family.

The unrest comes following the Red Devils’ involvement in the European Super League proposals, the latest show of greed from owners that have drained more than £1bn from the club’s coffers since a heavily leveraged takeover 16 years ago.

United fans have made several attempts to oust the American owners over the past decade and longer, the enforced cancellation of the club’s fixture with rivals Liverpool a huge statement from a fanbase angry with the powers in charge.

Solskjaer has now spoken for the first time about Sunday’s events discussed, criticising some of the criminal behaviour of the few but reiterating his stance that the ‘voice’ of the supporters must be listened to if the club are to move forward.

“It was a difficult day for us. Of course we wanted to play, to beat Liverpool for the fans,” Solskjaer told his pre-match press conference ahead of United’s Europa League semi-final with Roma.

“Our job is getting good results on the pitch. But as I said before the game, we have to listen, to hear the fans’ voice.

“It’s everyone’s right to protest but it has to be in a civilised manner. But unfortunately when you break in, when police officers are scarred for life, that’s a step too far. Then it’s a police matter, it’s not about showing your opinions anymore.”

Solskjaer was asked if he had a message for the fans and has urged supporters to protest peacefully, though says the club are keen to ‘communicate better’ as fractured relationships are attempted to be repaired.

“Of course we want to listen. It has to be in a peaceful manner, it’s important,” he said.

“Please voice your opinions. We know as a club we need to communicate better. I can refer back to the apologies, it came out wrong and it was the wrong thing to do.

“I know our fans want a team that is likeable, playing attacking football, scoring goals, winning trophies and being humble — that can identify back with them.

“My job is the results. We want to get back to winning trophies, we haven’t won for a while and that’s something we’re working on. I’m sure fans can see what the players are doing.”

Solskjaer spoke further on the scenes around Old Trafford last weekend and stated his view that protests must be done in the right manner, before aiming a jibe at the media for their coverage.

“The right to protest peacefully, everyone has got a human right to be heard. But it has to be peaceful.

“When you step out of line, when you break onto the pitch and into dressing rooms, that is not nice.

“And it’s not been helped by certain individuals, that is your (the media) end of it.”

The Norwegian admits the last few weeks have been ‘tough’ for the club amid the fallout, before outlining his intention to secure the club’s passage to the Europa League final tomorrow as the Red Devils bid to end the season with silverware.

“Sometimes frictions and challenges can move things forward. The last few weeks have been tough.” he added.

“I’ve had backing, I have to say. I’ve been put in charge and I’m responsible for the footballing matters, and I understand fans want to see trophies and progress.

“Hopefully we can get to a final tomorrow, that’s the short-term fix, then we’ll take it from there.”