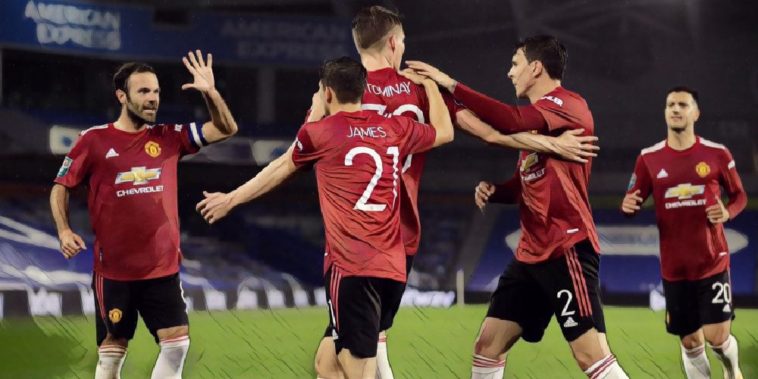 The Red Devils made ten changes from Saturday’s dramatic 3-2 win over the Seagulls, defender Victor Lindelof the only man to retain his place with captain Harry Maguire not involved in the matchday squad due to a minor injury.

With the away side effectively fielding a starting XI made up of fringe players, it was no surprise to them struggle to click into gear, January signing Odion Ighalo having the best chance of the opening 40 odd minutes, yet saw his effort ripple into the side netting after good work from Juan Mata.

The diminutive Spaniard was once again involved just before half-time, winning a free-kick after a shock burst of speed, before his delicate, inch-perfect delivery found Scott McTominay who headed Manchester United ahead unopposed at the back post.

The second period saw a much-improved display from United, though they still had to call upon ‘keeper Dean Henderson to keep the tie at 1-0, the Englishman tipping wide from a fizzing Leandro Trossard effort.

Shortly after Henderson’s save, United extended their lead through some neat football, summer signing Donny van de Beek producing a delightful flick to find Mata in the box, who shifted the ball onto his unfavoured right foot to slot home. Ole Gunnar Solskjaer’s men then sealed their passage into the last eight with ten minutes remaining as substitute Paul Pogba’s deflected free-kick nestled into the top corner.

The game saw midfielder Mata pulling the strings in midfield all evening and his was manager full of praise for the 32-year-old after he delivered a typically ‘composed’ performance to inspire his side to victory.

“A great performance by Juan Mata,” Solskjaer told Sky Sports. “He was the one who got on the ball and calmed us down. He was composed. He more or less creates the first goal himself. He is the ultimate professional. I am never surprised when he plays like this.

“He has been around the block and knows football. He does his work and is at the back stick to shield the ball from Dan Burn at a corner in the second half.

“We needed the first 20-25 minutes to get our confidence and get on the ball. We have worked on set pieces. You keep a clean sheet and this is important for a back four.”

The Norwegian was also asked about midfielder Paul Pogba following his poor display at the weekend, yet Solskjaer saw the Frenchman’s pre-planned entrance from the bench as a good ‘work-out’ – United having had a minimal pre-season preparation.

“We wanted to put him on for 25-30 minutes for a work-out. The game was there for him. Paul and Marcus (Rashford) found some good positions.”

Another unsurprising topic on the agenda was that of United’s transfer activity – or lack of it – although Solskjaer refused to offer any updates on any possible deals.

Scott McTominay heads home and the visitors lead at the Amex

“I can’t give you any news,” he unsurprisingly said. “We are working with what we have got. We have a big squad. We changed 10 players from Saturday. If there is any update, we will let you know.”

Asked specifically about Jadon Sancho, the Norwegian replied: “I don’t comment on other teams’ players. I can’t concern myself with other clubs. I know the club is working well and hard to have a strong squad as possible. Sometimes speculation is there and we can’t control that.”

Next up for United is a Premier League game against Tottenham Hotspur and former manager Jose Mourinho at Old Trafford on Sunday afternoon.

See also – Is Frank at fault? Why Lampard needs to look in the mirror when it comes to Chelsea’s deficiencies