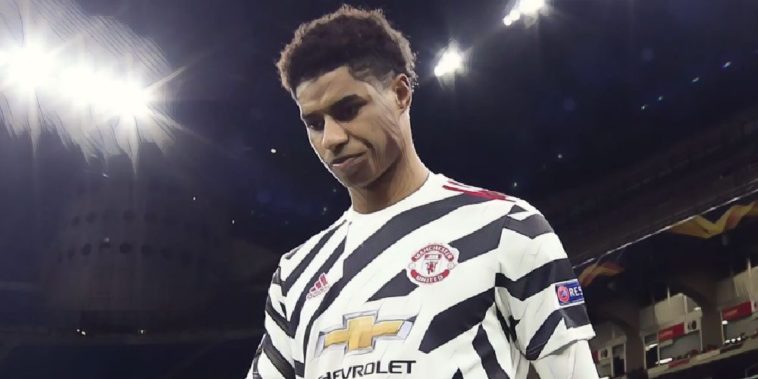 Ole Gunnar Solskjaer has provided an update on Marcus Rashford’s injury after the forward was withdrawn during Manchester United’s 1-0 win at AC Milan on Thursday.

United secured their place in the Europa League quarter-finals with a narrow victory in the San Siro, Paul Pogba coming off the bench at half-time to score the winning goal and seal a 2-1 win for the Red Devils on aggregate.

Pogba’s goal came on his first appearance since early February as the midfielder made his return from a thigh injury, the France international making an immediate impact after his half-time arrival, taking just three minutes to open the scoring.

The 28-year-old came on as a substitute after Rashford was withdrawn at the interval, the injury to the forward marring an otherwise positive evening for Solskjaer’s side.

Solskjaer has now provided an update on the England international and is hopeful the problem ‘won’t be too bad’, with the Red Devils facing Leicester in the FA Cup quarter-finals on Sunday.

“With Marcus yeah he had a little twinge,” Solskjaer told his post-match press conference.

“We couldn’t take a risk with him but hopefully he won’t be too bad.”

United will now join Arsenal as the Premier League’s representatives in the quarter-final draw today, with Tottenham having been eliminated following an embarrassing 3-0 defeat to Dinamo Zagreb.

Rangers are also out of the competition, losing 2-0 to Slavia Prague and finishing the clash with nine men as Kemar Roofe and Leon Balogun were dismissed.