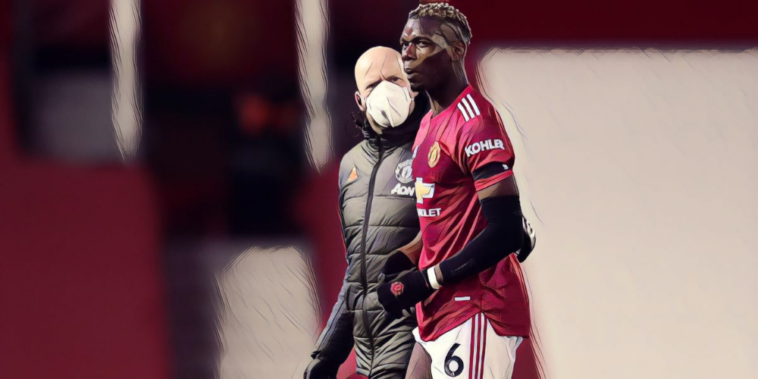 Ole Gunnar Solskjaer has confirmed that Paul Pogba will miss ‘a few weeks’ after the midfielder suffered a thigh injury in Manchester United’s 3-3 draw with Everton.

Pogba was substituted in the first half of the draw at Old Trafford after sustaining the problem and has since undergone a scan, with Solskjaer revealing the France international will need ‘a few weeks’ to recover.

“It’s an injury that will take a few weeks to heal,” Solskjaer told MUTV.

“He’s just started his recovery, working with the medical staff and we’ll get him back as soon and as safely as we can.

“Of course, Paul has been very important for us and we’re not going to take any risks. [So it is] A few weeks definitely.

“You never want to be injured and, especially, now Paul was really finding his form and enjoying his football. For us, we just have to take as many points and wins as possible, when you lose players.

“We’ve been very healthy and strong for a long period so we can’t moan too much.”

The news will come as a blow to the Red Devils with Pogba having impressed in recent weeks, the midfielder now set to miss tomorrow’s FA Cup fifth-round clash with West Ham and Premier League fixtures with West Brom and Newcastle.

Manchester United also face Real Sociedad over two legs in the Europa League round of 32 this month, before a crucial double-header against Chelsea and Manchester City on February 28 and March 6 respectively.