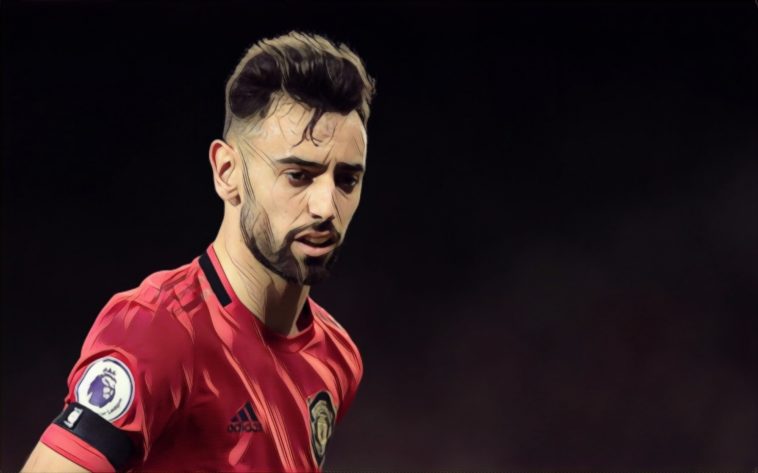 Although Manchester United and Wolves played out an uninspiring goalless draw at Old Trafford on Saturday evening, Ole Gunnar Solskjaer was delighted to see Bruno Fernandes finally kitted out in a red shirt.

While the rest of the Premier League was enjoying goal fests left, right and centre, the supporters in attendance were forced to endure a rather humdrum contest for 95 minutes, with the most notable feature of the game being the debut of midfielder Bruno Fernandes.

The influence of Manchester United‘s latest permanent signing was clear to see, as Solskjaer’s charges took 10 of their 15 shots from outside the box, with Fernandes almost catching out Wolves goalkeeper Rui Patricio in the second half.

It was Aaron Wan-Bissaka who set up the best chance of the game late on, crossing the ball for Diogo Dalot, only for the Portuguese full-back to hit the ball agonisingly wide. The visitors were the more dangerous side inside the box, but that did little to enhance this encounter as a spectacle.

In truth, the result suited neither club, as the hosts lost ground on the top four race by falling to fifth in the table behind Sheffield United, while Wolves remain in seventh tied on points with Saturday’s opponents and no closer to the Champions League spots.

Speaking to the BBC after the game, Solskjaer commended his team’s defensive performance, while shedding light on how he deployed Fernandes.

“We have played [Wolves] three times now and they haven’t scored yet. They are hard to work down, very structured,” the Norwegian said.

“We passed, passed and passed. In the first half we didn’t have enough movement, second half was much better.

“Bruno Fernandes will become a top footballer. Give him time and he will become a very good addition for us. We dropped him deeper to get him on the ball and I thought him and Fred did very well.

“His demeanor, smile, everything about him is a boost for everyone. He is a genuine lad, a top professional and he is a winner. Today we saw glimpses of his character and we will see more and more.”

“Odion Ighalo is in the air and on his way. We will give him time to settle. He is a striker, has a physical presence and is a goalscorer so he will give us a lot.

“You would be thrilled [with the move] when you have been a Manchester United supporter your whole life and you’ve been working your whole life. Being the top scorer in the Africa Cup of Nations tells you a lot about the qualities we are going to get.”

See Also: Six Premier League records that could be equalled this season