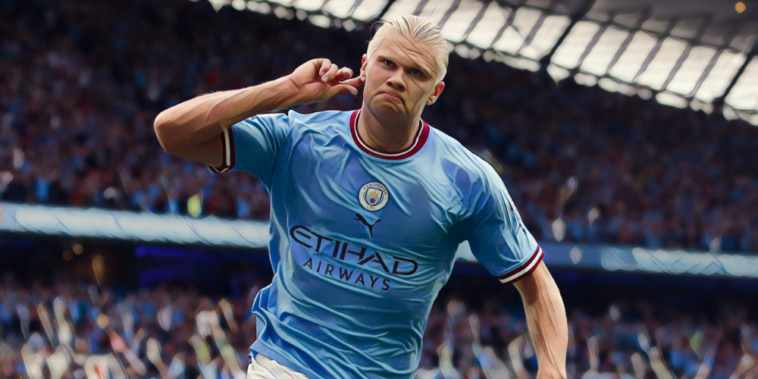 Mancunian rivalries resume in the Premier League this weekend, as Manchester City welcome Manchester United to the Etihad.

City spent almost two decades in the shadow of their cross-town rivals, who dominated the early seasons of the Premier League under the guidance of Sir Alex Ferguson. It is now the blue half of the city in power however, with four titles in five seasons for Pep Guardiola and his team.

The rivalry between the teams has heightened since City’s emergence as a major force and the two teams have regularly competed for players in the transfer market.

Erling Haaland has lit up the Premier League this season with a spectacular start to his career at Manchester City.

The forward has scored a staggering 14 goals in just ten appearances for City in all competitions, a haul which has included back-to-back Premier League hat-tricks against Crystal Palace and Nottingham Forest.

United fans have no doubt watched on with both envy and regret, given how it all could have been so different. The Red Devils were interested in a deal to sign Haaland in 2020, following his exciting emergence at Red Bull Salzburg.

Ole Gunnar Solskjaer had played a role in Haaland’s meteoric rise at Molde and was keen to reunite with his compatriot in the Premier League, but United’s refusal to accept a release clause in his contract saw Borussia Dortmund swoop in to seal a £20m deal.

The last time Erling Haaland failed to score for Norway, he scored twice and got an assist in his next game.

“We gave Erling Haaland a release clause… otherwise he would have gone to Manchester United,” Borussia Dortmund chief Hans-Joachim Watzke later told 19:09 Talk, as per the MEN.

Dortmund reaped the rewards after accepting a stepping stone role in Haaland’s development, as the forward scored 86 goals in just 89 appearances for the German side and was named as Bundesliga Player of the Season for 2020/21. United, meanwhile, signed Odion Ighalo on loan from Shanghai Shenhua.

After two-and-a-half seasons Haaland signed for City in a £51m deal, earning Dortmund a healthy profit.

Jack Grealish was on Manchester United’s transfer wish-list in 2020, but after a move broke down he signed a new deal with Aston Villa before a move to Manchester City the following summer.

Ole Gunnar Solskjaer had targeted the Villa captain to add creativity to his side, but he instead signed new contract at his boyhood side. Grealish later revealed how close he came close to a move to Old Trafford.

“I was really close to going (to United), but nothing happened in the end,” he told the Daily Telegraph.

“We played United in a pre-season game on Saturday and I wasn’t supposed to play in a cup game at Burton. But after the United game I said to Christian Purslow [Aston Villa’s chief executive] and my agent ‘if I’m not leaving, I’ll sign my new contract’.

“I went in with my dog on Tuesday morning, signed the deal, and played later that day. We all agreed on the clause and if any team hit that, it’s a win-win because it means I’ve had an unbelievable season and Villa got £100 million.”

City activated that release clause the following summer, in a deal which made Grealish the most expensive Premier League player of all time. He won the Premier League title during his debut season at the Etihad and has scored seven goals in 45 appearances for the club.

Manchester City and Manchester United went head-to-head in the race to sign Fred in 2018, with the midfielder eventually signing a long-term deal at Old Trafford.

Fred was linked with a move to City as the club sought a long-term replacement for Fernandinho, having impressed in Shakhtar’s win over Pep Guardiola’s side in the Champions League.

He had followed Fernandinho’s path from Brazil to Shakhtar Donetsk, where he won three league titles across his five seasons with the Ukrainian side.

United eventually agreed a deal to sign the midfielder following his role in Brazil’s World Cup campaign, completing a transfer worth £52m.

Fred called the Red Devils ‘the biggest club in the world’ upon his arrival and expressed his excitement to work under Jose Mourinho, though the manager was sacked just months later.

Fred has since made 164 appearances in all competitions for United but has polarised opinion among the fanbase. His midfield axis with Scott McTominay has often viewed as symbolic of the club’s midfield malaise.

Cristiano Ronaldo was linked with a shock move to Manchester City last summer, but a deal failed to materialise before Ronaldo completed his return to Manchester United.

City had expressed an interest in signing Ronaldo from Juventus, after the Italian side decided to move on the five-time Ballon d’Or winner after three seasons in Turin.

Pep Guardiola’s side held talks over a potential deal to sign the Manchester United icon, who won three league titles and the Champions League during his successful first spell at Old Trafford. However, Fabrizio Romano has since revealed that a move was further away than speculated in the media.

“As you’ll remember last summer, there were talks over a surprise move for Cristiano Ronaldo to join Manchester City,” Romano said in his column for CaughtOffside.

“Still, it was never 100 per cent approved by the board or by the technical staff at City. There were also some issues at Ronaldo’s end with his agent Jorge Mendes, so the deal collapsed, even though Juventus were happy to accept the move.

“In the end, United appeared on the scene and Ronaldo was happy to join them as soon as their interest became apparent.”

Ronaldo rejoined the Red Devils amid much fanfare and scored 24 goals in all competitions last season, performances which earned the 37-year-old the club’s Player of the Season accolade. However, United’s failure to secure Champions League football saw Ronaldo agitate for a summer exit and his future remains uncertain.

Manuel Akanji was reportedly on the radar of Manchester United ahead of the summer transfer window, as the Red Devils sought reinforcements at centre-back.

Ralf Rangnick was an admirer of the Borussia Dortmund centre-back and, according to Fabrizio Romano, a potential deal collapsed following the German’s departure from Old Trafford at the end of last season.

City made a surprise move to sign Akanji in the closing stages of the window, agreeing a £15m deal for the Switzerland international. The 27-year-old has added depth to City’s centre-back options and has impressed across his opening performances for Pep Guardiola’s side.

Pep Guardiola admitted that Manchester City were priced out of a deal to sign Harry Maguire, who signed for rivals United in a world-record deal for a defender.

Maguire had impressed as England reached the semi-final of the 2018 World Cup and completed an £80m move to Manchester United the following summer.

City had wanted to sign the centre-back from Leicester, but refused to match the record-breaking sum.

“We were interested, but we could not afford it. United afford it. He’s an excellent player, national team too, he had an incredible World Cup.

“He’s strong in the air, good with the ball, the build-up, he drives with the ball, he’s fast, so fast. He has all the qualities. Congratulations to United for this signature.”

Maguire made a strong start with the Red Devils and was appointed club captain just six months after his arrival at Old Trafford. However, he has since suffered an extended downturn in performances and faces an uncertain future after losing his place in the team.

After an error-prone campaign in 2021/22, he has made just two league starts so far this season with new manager Erik ten Hag having preferred a partnership of summer signing Lisandro Martinez and Raphael Varane.