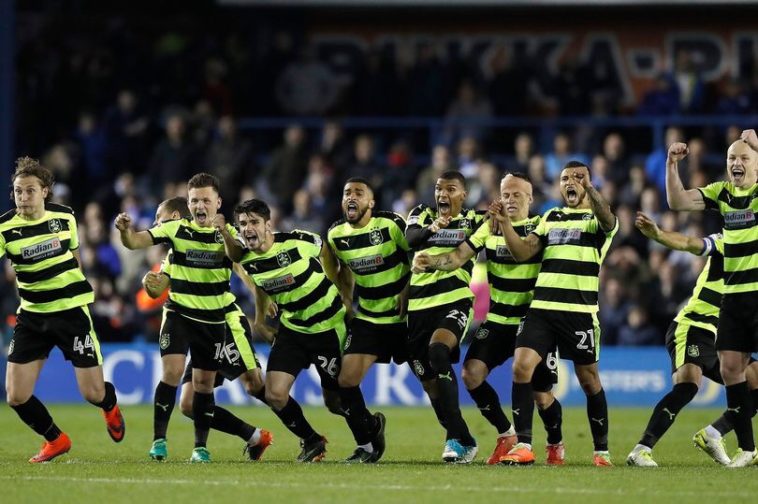 Huddersfield Town booked their place in the Championship Play-Off Final. Goalkeeper Danny Ward was the hero, as they beat Sheffield Wednesday 4-3 on penalties. They will face Reading in the final on May 29th, with a place in the top-flight at stake.

The first 45 minutes were far more entertaining than the previous 90 from both sides. However Sheffield Wednesday were forced into a tactical reshuffle early on. Ross Wallace sustained an injury after just five minutes with Adam Reach being brought on as his replacement.

It was the substitute Reach who forced Hudderfield keeper Danny Ward into making his first save. Reach controlled Kieran Lee’s cross, however his effort was denied by the Terriers keeper, this was the first clear-cut chance of the night.

Nonetheless Huddersfield responded well, as they managed to hit Wednesday on the counter a number of times. Nakhi Wells carved himself half a chance, however he was forced into scuffing his shot. Izzy Brown also saw his effort shave the post, as the duo caused some panic for the Owls defence.

Once again Izzy Brown saw another one of his efforts saved. This time the Chelsea loanee shot straight at keeper Danny Ward. With 35 minutes played the game began to open for both sides, as both pressed to break the deadlock.

Both sides headed into the break goalless. With the deadlock yet to be broken in the tie, both Yorkshire sides remained in search of a decisive punch.

But less than six minutes into the second-half, Steven Fletcher gave Sheffield Wednesday the lead.Midfielder Barry Bannan took matters into his own hands, as expertly crossed a diagonal ball from deep to pick out Steven Fletcher in the box. The quality of the ball was matched by Fletcher’s aerial quality, as the Scotland International rose highest to head home. The goal put Wednesday ahead in the tie.

Then with less than 20 minutes of normal time remaining, Huddersfield drew level. Collin Quaner’s shot took a deflection off Wednesday defender Tom Lees and went in. Despite going behind Huddersfield responded well, and they were rewarded for their persistence.

After 90 minutes, neither side could be separated as they headed for extra-time.

With a further half and hour to be played, both sides had chances to win the game. Seemingly one goal would have won the tie for Huddersfield or Wednesday, as the search for the decisive punch seemed never ending.

Huddersfield almost took the lead after Nakhi Wells saw his effort hit the side netting, probably the Terriers best chance during extra-time. Jordan Rhodes then saw his shot saved by an inspired Danny Ward, who got down low to save the Scottish striker’s effort.

In addition to this Rhodes also saw another effort from his headed wide. Usually the striker is accustomed to putting those chances away, however he was a tad unlucky on that occasion.

Once more neither side could prize their way through, therefore the game was finally taken to a penalty shoot-out.

Sheffield Wednesday saw three of their five penalties converted, with two being saved in the process. As for Huddersfield Town they scored four out of five, with one being saved.

David Wagner and his side have a date with destiny. After defeating Sheffield Wednesday on penalties, they shall face Reading in the Championship Play-Off Final on May 29th. The Terriers continue to defy the odds, right until the end.

On the other hand Sheffield Wednesday will undoubtedly feel gutted. After enduring such a tough season to maintain a play-off place, this is their second successive unsuccessful attempt in the play-offs. Their 17 year absence from the top-flight goes on.

Nearly 50 years outside the top-flight of English football may potentially end for Huddersfield Town. They are now one game away from Premier League football.

Who will make it to the Premier League