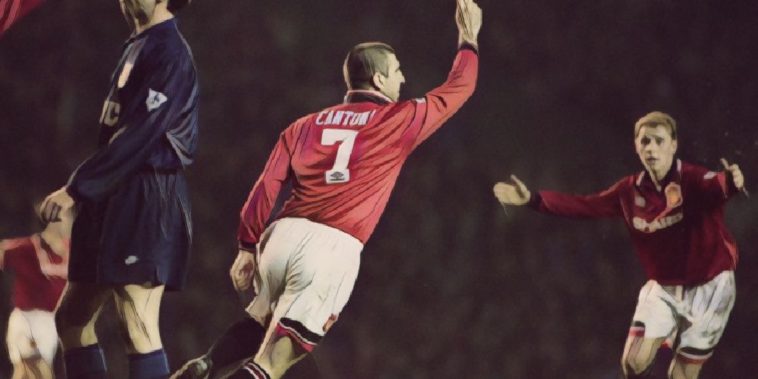 Arsenal meet Manchester United this weekend as arguably the Premier League’s most iconic rivalry is resumed at the Emirates, the two sides having spent much of the league’s early years as division’s dominant forces.

The fortunes of both sides have taken a downturn since the exits of managerial greats Arsene Wenger and Sir Alex Ferguson, though this weekend’s clash offers up an intriguing clash between a resurgent Arsenal and a United side sitting second.

Ahead of the contest, we’ve decided to look back and take a nostalgic trip down memory lane, here are seven classic goals from Manchester United and Arsenal clashes:

Eric Cantona’s arrival at Manchester United is widely credited as the catalyst behind the Red Devils’ early dominance of the Premier League, the forward signing in a shock deal from rivals Leeds and inspiring the club to a first league title in 26 years during the division’s inaugural season.

United entered the 1993/94 season as champions and were amongst the favourites to win the title once more, facing an Arsenal side tipped to be challengers in an early-season contest at Old Trafford.

Arsenal had endured a disappointing league campaign the previous season but made history by becoming the first team in history to win a domestic cup double, and a tightly-contested encounter needed a moment of magic to separate the sides.

Cantona, as so often was the case in the early nineties, proved to be the match-winner for United, thumping home a spectacular free-kick to score the only goal of the game and seal all three points.

🗣 "Oohh, a real cracker from Cantona!"

The King netted this spectacular effort v Arsenal in 1993. pic.twitter.com/AUG8VYRzw1

Cantona finished the season with 25 goals in all competitions as United won a first-ever domestic double, his performances seeing the French forward named as the PFA Player of the Year.

Cantona’s eight-month suspension for a sensational and shameful moment of madness at Crystal Palace contributed to the Red Devils missing out on the title in 1995, but he returned in October of the following season to play an instrumental role in their title charge.

His form during the run-in was simply sensational as he dragged a youthful side towards success, scoring the decisive goal in five separate 1-0 victories following the turn of the New Year.

Amongst those was another tight affair against Arsenal in late March, with the Frenchman once again showing just why he was regarded as the most influential player in the Premier League.

A headed clearance dropped invitingly for the forward some 30-yards out, with Cantona cushioning the ball on his chest before smashing a blockbuster effort over the goalkeeper and in off the crossbar.

A special moment from a special player, who picked up the FWA Footballer of the Year award after helping United to yet another domestic double.

Arguably the definitive goal of the Manchester United-Arsenal rivalry, at a time when the two sides were the chief contenders for English football’s biggest prizes.

Arsene Wenger’s arrival in north London had seen Arsenal emerge as a huge threat to United’s domestic dominance, with the Gunners claiming a domestic double during the 1997/98 season.

The following campaign saw the two teams again lock horns in a tightly-contested title race, whilst they met in the semi-finals of the FA Cup in an all-time classic at Villa Park.

An end-to-end contest headed to extra-time as David Beckham’s fine opener was cancelled out by Dennis Bergkamp, who later spurned the opportunity to win the tie for Arsenal after seeing a penalty saved by Peter Schmeichel.

With the game heading towards the lottery of a shoot-out, it was Ryan Giggs who proved the hero for the Red Devils, intercepting a wayward Patrick Vieira pass inside his own half before surging forward.

The fleet-footed star had made a mockery of many an opposition defender with his dribbling ability and the Gunners’ backline seemed fearful of overcommitting, Giggs racing forward and waltzing through a succession of feeble challenges before lashing the ball high beyond David Seaman.

"It was inexplicable," said David Beckham, "that Vieira would give the ball away like that."

"I have no idea why nobody just kicked him," said Roy Keane.#OnThisDay in 1999, Ryan Giggs intercepted the ball v Arsenal and kept going and going and going…pic.twitter.com/G0QMjVkvic

It was an incredible piece of solo brilliance that secured United’s passage to the FA Cup final, beating Newcastle at Wembley to win the competition and pipping Arsenal to the title by just a single point as part of a historic treble-winning season in 1999.

Our opening offerings have been a little Manchester United heavy, but Arsenal fans will no doubt recall this sublime piece of skill from Thierry Henry in 2000.

Henry had arrived in north London as an underperforming winger before being transformed into a clinical forward by Arsene Wenger, overcoming a difficult start to score 26 goals in all competitions during his debut season.

United were well aware of the star’s talents when the two sides met early in the 2000/01 season and Sir Alex Ferguson will have been pleased to see Denis Irwin push the forward outside the area with his back to goal.

What wasn’t envisaged, perhaps by anyone inside Highbury with the exception of Henry, was a moment of pre-meditated genius that would decide the outcome of a high-stakes Premier League clash.

There appeared little danger as the ball was played into the Frenchman’s feet just outside the area, before Henry – in one majestic movement – flicked the ball up and swivelled to hit a dipping volley over the head of compatriot Fabien Barthez.

#OTD in 2000: Arsenal beat Manchester United 1-0 thanks to this spectacular goal from Thierry Henry pic.twitter.com/QA7HB7dE45

The France international could only stand and watch as the ball arced into the far corner, Highbury erupting following another outrageous match-winning intervention from north London’s latest hero.

Henry was unquestionably the Premier League’s finest footballer at the peak of his powers and in the 2003/04 campaign, both he and Arsenal were quite literally an unbeatable force.

Arsene Wenger’s side were crowned as champions following an incredible unbeaten campaign, with Henry the star of the show scoring 30 league goals to win a second successive PFA Player of the Year and FWA Footballer of the Year double.

Defending champions United were no match for the free-flowing Gunners throughout the season, though secured a 1-1 draw at Highbury after a late Louis Saha equaliser rescued a point.

Henry, however, was the man who lit up the contest after opening the scoring with this thumping effort from distance, taking advantage of the defender’s hesitancy in closing him down to rifle home a stunning, swerving strike.

Manchester United and Arsenal’s rivalry has been littered with several iconic moments throughout the years, growing ever more intense as the two sides shared each Premier League title between 1996 and 2004.

Amongst the most defining encounters was a thrilling contest between the two sides at Highbury in 2005, a fixture in which tensions boiled over before a ball had even been kicked as captains Patrick Vieira and Roy Keane clashed in the tunnel pre-match.

The game lived up to its billing as the two sides shared six goals in an electric atmosphere, United twice trailing before coming back to secure a precious 4-2 win and end Arsenal’s long unbeaten run on home soil.

Cristiano Ronaldo scored twice for the visitors in a superb individual display from the youngster, but it was an unlikely source who provided a touch of class to seal the result late on.

More than a decade later and we’re still not sure how John O’Shea found himself in on goal after beating the offside trap, and even more confused as to where this delightful piece of skill came from.

The touch, the technique and the general look of astonishment on even the own player’s face makes this one of the great goals from Manchester United and Arsenal’s modern history.

After contesting some huge encounters in the Premier League era the two sides met on Europe’s biggest stage in 2008/09, drawn together in the semi-finals of the Champions League.

United were the holders of the competition after beating Chelsea in the previous season’s final and headed into the second leg at the Emirates with a narrow advantage, John O’Shea having scored the only goal of the game in Manchester.

Arsenal fans were expectant as their side sought a second Champions League final appearance in three seasons, though the north Londoners were silenced inside the opening 11 minutes as the Red Devils struck twice through Ji-Sung Park and Cristiano Ronaldo’s 40-yard free-kick.

That effort from Ronaldo was worth inclusion on this feature alone, but it is the Portuguese’s second of the evening that we’ve opted for and a goal that symbolised the devastating effectiveness of United at that time.

Arsenal were undone from their own attack following a stunning and clinical counter from the visitors, a sweeping move that began with a clever back-heeled flick from Ronaldo into Park.

= One of THE great #UCL counterattacking goals 🤩

The South Korean was famed for his lung-busting efforts and charged into enemy territory, before releasing Wayne Rooney down the left in lightning-quick fashion.

After driving forward the striker lifts his head and plays an inviting ball across the Arsenal penalty area, his cross met by a rampaging Ronaldo who rejoins the attack and slams home an emphatic finish.

The Ronaldo-Rooney partnership at their youthful peak remains one of the most iconic combinations of the Premier League era, two players capable of deciding games in an instant.

Quiz – Arsenal v Man Utd – What do you remember of this great Premier League rivalry?