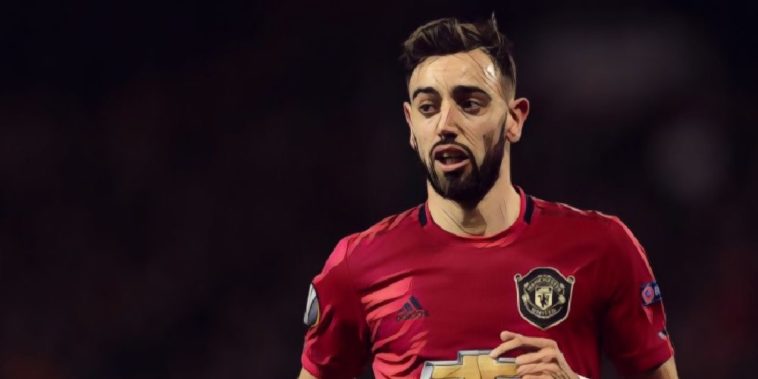 Fernandes starred during Manchester United‘s resounding 5-0 Europa League victory over Club Brugge last night, the January signing scoring for the second successive fixture with a well-taken penalty to open the scoring against the Belgian side, as well as having a hand in two other goals.

The Portuguese international has shone since his mid-season move from Sporting Lisbon and has added a new dimension to Ole Gunnar Solskjaer’s midfield, and the 25-year-old has made a big impression on two former United midfielders – earning comparisons to Man City star De Bruyne.

Asked what’s impressed him about Fernandes, Scholes replied: “Everything so far,” Scholes said in his role as a pundit on BT Sport.

“Creativity as we said. Awareness on the pitch. Before the ball comes he knows what’s happening. He’s sensational. More often than not he makes the right pass.

“He’s got goals in him. You just wonder why nobody else came in for him or why we didn’t get him in the summer.

“We say ‘is he a No.10 or No.8′ and when I think of him the only other player I can think of is Kevin De Bruyne at Manchester City.

“He [De Bruyne] is the best player in the Premier League but Fernandes is right up there.”

Hargreaves was similarly impressed by Fernandes’ performance and hailed the playmaker’s awareness, adding another comparison in likening the star to fellow pundit and former Red Devils’ teammate Scholes.

“Scholesy is right, the one word is awareness,” Hargreaves said. “His awareness on the football pitch is special. He gets in good positions because he has a good feel for the game.

“I think that was Scholsey’s greatest attribute, he kind of knew what was going to happen before it happened, almost like [in a game of] Chess.

“I’m not saying Bruno has that – because there will never be another Paul Scholes – but he thinks like that and has ideas like that.”

Hargreaves also discussed where he feels is Fernandes’ best position and admitted the midfielder is capable of fulfilling a variety of roles, insisting the best players will always ‘find space’ as they bid to exert their influence over proceedings.

“It doesn’t matter [where Fernandes plays], if you look at De Bruyne the other night and he played as a false nine,” Hargreaves added.

“The point is, the great players find space like he did, like De Bruyne does, and Bruno did that today.

“He’ll drift everywhere and find space because that’s what the good ones do, and even if it’s tight, he’ll get on the half-turn, he’ll be ready. As an eight, or a 10, he’ll be effective”