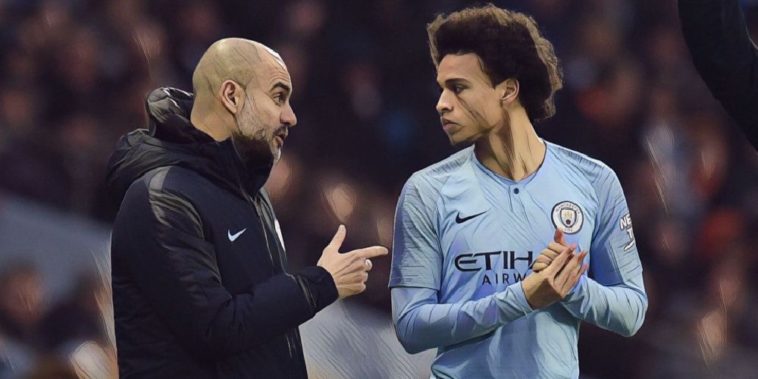 Leroy Sane has revealed how Pep Guardiola ‘tirelessly’ strived to improve him as a player, crediting the Manchester City manager taking his game to ‘a completely new level’.

Sane arrived at the club in a £37m deal from Schalke in 2016 and developed into one of the Premier League‘s finest wingers during his time at the Etihad, winning back-to-back league titles and being named as the PFA Young Player of the Year in 2017/18.

Reports had suggested that Sane – who made 135 appearances and scored 39 goals in all competitions for Manchester City – had fallen out with Guardiola during his final season with the club, though the winger insists the pair had a good relationship and has credited his former manager for elevating his game.

Sane has opened up on Guardiola’s relentless desire to improve his players and admits the continued instructions from the Catalan coach had him hearing ‘a little man in my ear with his voice’.

“He raised me to a completely new level,” he told Der Spiegel. “Mainly by working on little things: Which foot do I take the ball in which situation and how? What is the best action to open the space?

“Other coaches tell you that too, but he really did it every day until I did at some point have a little man in my ear with his voice that told me what to do when and how.”

Sane was asked what separates Guardiola from other coaches and says the Spaniard is never satisfied with his work, admitting the City boss is always looking to find ways for his players to improve and reach a new level.

“That he doesn’t stop when he sees that you’ve improved,” he said.

“He’ll find something new to work on with you tirelessly.

“If I hadn’t moved to Manchester, I probably wouldn’t have reached that level.”

Sane has made a strong start to his career at Bayern Munich despite struggling to cement an automatic starting position, scoring four goals and providing five assists in just seven league starts for the Bundesliga leaders.

Friday Quiz – Have you been paying attention to the week’s biggest football stories?