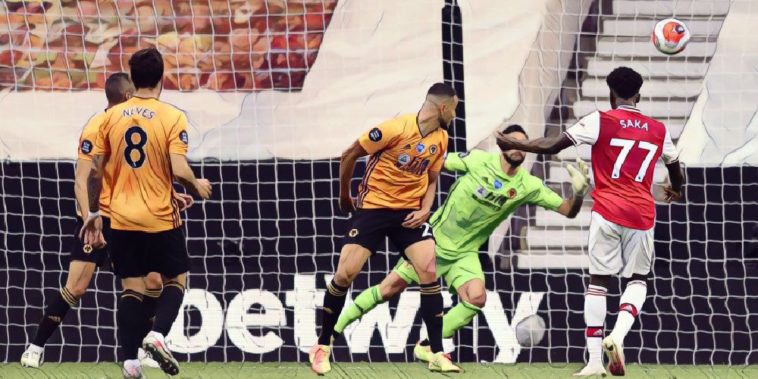 Wolves came into this weekend’s fixtures just three points behind the top four places, having earned plenty of plaudits for their well-drilled, impressive brand of football under Nuno Espirito Santo, while Arsenal have endured an inconsistent season and were six points further back.

However, in what was a relatively balanced first half, it was the Arsenal who had the better of the chances, and just before half time – and fresh off the back of signing a new five-year deal in midweek – teenager Bukayo Saka smartly volleyed home the opener after he was left unmarked by the penalty spot.

Wolves upped the tempo and dominated after the break, but were unable to break down Mikel Arteta’s side – who had lined up with three-at-the-back – before Alexandre Lacazette ensured all three points returned to North London with four minutes to play, the Frenchman taking a neat touch inside the box before firing home at the near post, his first league goal away from the Emirates since February 2019.

Speaking after the game, goalscorer Saka reflected on a hard-fought victory which capped off a memorable week.

“It is very big,” the England U19 international told Sky Sports. “We know how good Wolves are and how tough it was going to be. We fought for every ball and it is good to build some momentum.

“It has been a week I will remember for my whole life. You can see the manager is building and that I can tie down my future here.”

Bukayo Saka is the youngest Arsenal academy graduate to score a Premier League goals for the club in the competition's history.

Arsenal were restricted to just 35 per cent possession after the break as Wolves looked to get back into the game, and Saka was pleased to see increased unity in the squad.

“It was a shift,” the 18-year-old added. “Everyone fought for each other, together and that is why we got it over the line. The subs helped us out so much and gave us a boost. It feels like we are more together.

“I am 18 and it has been a dream to play for this club. I have to take each game by game. Wherever the boss wants to put me, I want to play. It is a dream to be here.”

Meanwhile, Nuno Espirito Santo urged his side to ‘bounce back’ after his team failed to score for the first time since the restart.

“First half was balanced. Both teams were organised with not many chances. One moment we lost our shape and Arsenal scored. We started the second half better and were pressing and creating chances. But we knew as the game goes by Arsenal have good players on the counter-attack. The work was there. We go for the next one.

“Mistakes happen. What we have to look at and solve. It was a moment of concentration and we allowed ourselves to concede. We have to bounce back and reinvent ourselves.

“I think we had spells where we had options to score. The goal was there and we were looking for it. After the second goal it became much harder.

“It doesn’t change the way we see things. Other results and the table do not guide us. We were not able to do things we wanted to do. We only focus on the way and how want to do things and focus on the next challenge. We must stay in the game. Arsenal did not have many chances and we allowed them to have these moments.”