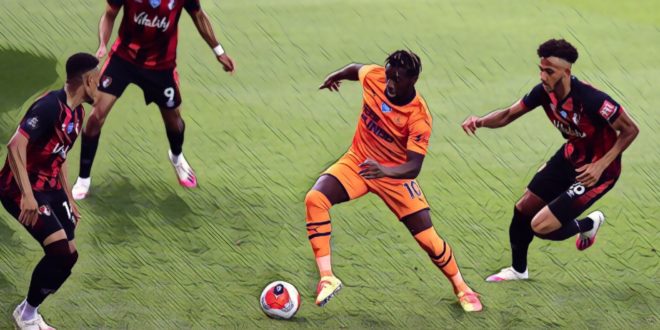 Allan Saint-Maximin has urged Newcastle to ‘keep going’ after the club continued their impressive restart to the Premier League campaign with a 4-1 victory at Bournemouth.

Saint-Maximin was the star of the show with three assists as Steve Bruce’s side piled more pressure on the relegation-threatened Cherries, Dwight Gayle punishing a mistake from Jefferson Lerma to open the scoring after five minutes before Sean Longstaff doubled the lead before half-time.

Second half strikes from Miguel Almiron and substitute Valentino Lozaro made it four for the rampant visitors, with Dan Gosling’s stoppage-time goal against his former side little consolation for a Bournemouth side who have lost each of their three fixtures since the restart.

Newcastle are now just four points from the European places after a five-game unbeaten run in the Premier League, and Saint-Maximin says his side need to continue looking forward as they bid to finish the season strongly.

“Everyone is really happy. We want to win this game. Every game is like a final because we want to move up if possible. We played a great game today,” Saint-Maximin told Sky Sports.

“I like my second assist because it is good dribbling. I said to [Sean] Longstaff to wait for this and he was to score a great goal so I am really happy.

“The lockdown gave me a good opportunity to feel better and that is what has happened. I am happy because my team has won.

“It helped me a lot because I had time for recovery. It gave me that opportunity to play better so I want to keep going and keep working.

”We just want to look forward. We have a big game against West Ham so if we win this we have 45 points. We want to keep going.”