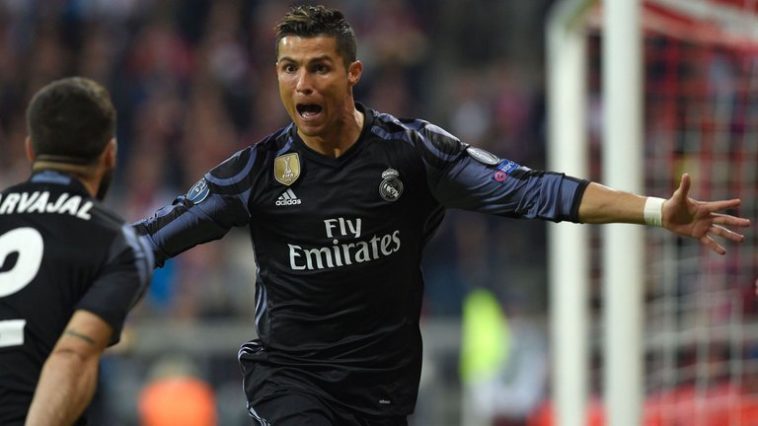 Cristiano Ronaldo scored twice for Real Madrid and reached 100 European club goals, to take a 2-1 aggregate lead into the second leg at the Santiago Bernabeu.

Bayern Munich took the lead through Arturo Vidal on 25 minutes and the Chilean international missed a penalty-kick shortly after.

The hosts would live to regret their missed spot-kick, when Cristiano Ronaldo scored his first Champions League goal in over six months to equalise for Real Madrid just two minutes after the interval.

Bayern were reduced to 10-men in the second half when former Barcelona defender Javi Martinez was awarded a second yellow card. This forced Bayern to reshuffle their team and left them vulnerable to Real’s clinical attack.

Cristiano Ronaldo netted his 100th European club goal in the late stages of the second half to secure victory for the visitors.

Real Madrid have scored in each of their last 53 games, since their 0-0 draw in last season’s Champions League semi-final against Manchester City in April 2016.

The second leg will take place next Tuesday when Bayern look to overturn a one-goal deficit at the Santiago Bernabeu.

Bayern Munich took a one-goal lead into the half-time break, but Cristiano Ronaldo equalised for the visitors just after the break. Both teams had high-profile absentees, with the likes of Robert Lewandowski and Mats Hummels missing for Bayern, whilst Pepe and Raphael Varane were out for Real.

Real Madrid sat incredibly deep in the first half, which allowed Bayern to dictate possession and threaten their vulnerable defence. Nacho and Ramos lacked composure in the first period and were liable for giving away possession and creating space for their opponent to exploit on various occasions.

This was made evident when Ramos attempted to calmly clear the ball away from danger in the build-up to Bayern’s missed spot-kick. The Spanish defender gifted possession to the hosts and Ribery’s subsequent effort was deemed to have been handled by Carvajal.

The Bavarians had full momentum when Arturo Vidal faced the prospect of doubling their lead from the penalty spot. However, he lacked composure and horrendously blasted the ball over the crossbar.

His spot-kick miss proved to be the beginning of the unravelling of Bayern’s initially promising performance. Real Madrid went onto equalise shortly after the break through Cristiano Ronaldo, as the Spaniard’s fired themselves back into the tie.

The game was on a knife edge, both teams created attacking opportunities and it was well balanced. This was until Javi Martinez brainlessly made a naive lunging challenge on Cristiano Ronaldo in the second half.

This proved to be another turning point and Real Madrid exploited and punished Bayern to take advantage of their numerical superiority. The Germans will be hoping that Mats Hummels will return from injury, in time for next Tuesday, due to the suspension of Javi Martinez.

Bayern Munich were forced to reshuffle their line-up, replacing Xabi Alonso with Bernat and shifting Alaba into central defence. They lost their team posture and the sudden change of personnel and their numerical disadvantage cost them dearly.

They were rescued by the heroics of their brick wall between the sticks. Manuel Neuer pulled off a series of world class saves to thwart Real’s prolific attack. Despite this, eventually the ball squeezed through his legs and Bayern suffered their first competitive home defeat of the season.

Bayern Munich evidently lacked the leadership skills of defender Mats Hummels. The former Borussia Dortmund defender has great composure, which is something Javi Martinez was seriously lacking when he lunged in on Cristiano Ronaldo.

Frank Ribery was also ineffective, despite earning the hosts a penalty-kick in the first half. The aging Frenchman has lost a yard of pace and this has also had a negative impact on his technical abilities.

Eventually Carlo Ancelotti replaced Ribery with former Shakhtar Donetsk winger Douglas Costa. This substitution was due for some time and should’ve been made earlier in the second half.

Thomas Muller was disappointing and failed to make a point when he filled the boots of first-choice striker Robert Lewandowski. Last season, Muller scored 32 goals in all competitions, whereas the German international has only scored 8 times this season

Nacho and Sergio Ramos seriously lacked composure in the first half and offered too much space for Bayern to attack. Yet, Bayern persisted to overload the right hand side to create opportunities via Arjen Robben and Phillip Lahm

This seemed the perfect opportunity for them to drive through the centre of Real’s defence. However, Muller was caught offside on various occasions and FCB seriously missed Robert Lewandowski.

If you are a budding football writer, and are keen to write about any club around Europe, including Real Madrid or Bayern Munich, please join our writing team.