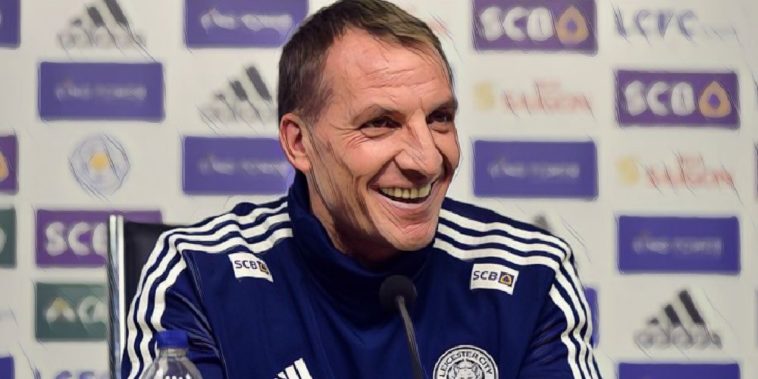 Brendan Rodgers admits he is relishing the prospect of facing champions Manchester City this weekend as Leicester travel to the Etihad in a huge clash at the top of the Premier League.

The Foxes have emerged as the surprise package of the Premier League so far this season and currently sit second in the division, four points ahead of Pep Guardiola‘s side ahead of their meeting on Saturday evening.

The club’s fine form has seen Leicester emerge as surprise title contenders and Rodgers is keen for the club to continue the momentum of a nine-game unbeaten league run, labelling the contest as an ‘amazing opportunity’ for his side to demonstrate the progress they have made in recent months.

“We respect we are playing against a really top-class team that have been the champions the last couple of seasons and play to a fantastic level,” Rodgers said at his pre-match press conference.

“It is an amazing opportunity for us to show we are improving and for our players to demonstrate their qualities in such a big game.”

“We are mindful of their quality but I would say it is a great opportunity for us to show our qualities and the talent we have in our team.”

Asked whether Leicester must win at the Etihad, Rodgers replied: “It’s one where we can only think about ourselves. We can’t forecast what the other teams are going to do.

“We’re happy with where we’re at but we do have objectives.

“We’re in a position that nobody expected us to be in. I don’t want to trap the players in pressure. I want them to enjoy.”

Leicester go into the game looking to cut the gap at the top to seven points, with league leaders Liverpool not in domestic action this weekend due to their participation in the Club World Cup final.

See also – Best of the 2010’s: The top Premier League coaches of the decade