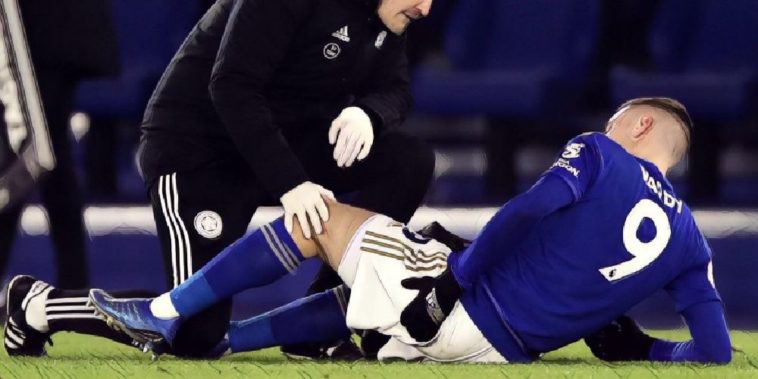 Brendan Rodgers is hopeful that Jamie Vardy’s injury ‘will ease off’ over the next couple of days after Leicester cruised to a much-needed win over West Ham last night.

Two late goals from Ayoze Perez put the lid on what was eventually an emphatic 4-1 win over David Moyes’ West Ham, the Foxes getting back to winning ways after two consecutive defeats.

Earlier goals from Harvey Barnes and Ricardo Pereira had set Leicester well on their way to victory, before Mark Noble’s penalty had pulled one back for the visitors just after the interval.

The result increases the gap between themselves and fifth-placed Manchester United to 14 points, as they look to consolidate their place in the top four and qualify for next season’s Champions League.

However, the three points were overshadowed by the injury to Jamie Vardy, who appeared to have suffered a hamstring problem in the first half, and was eventually substituted by Kelechi Iheanacho in the 43rd minute.

However, Rodgers has eased concerns that it was a serious problem that will see the English striker miss out on a significant amount of football.

“It is not his hamstring which is good,” Rodgers told BBC Sport. “Hopefully over the next couple of days it will ease off and he will be fit.

Vardy currently leads the Premier League scoring charts with 17 goals, but Rodgers his dismissed the team’s reliance on him.

“Jamie is a real talisman for the team but if we are going to have success it is about the team.

“He hasn’t played for us in a number of games and the team has still played well but of course we want him fit and well. He is such a good player and we hope it is not too serious.”