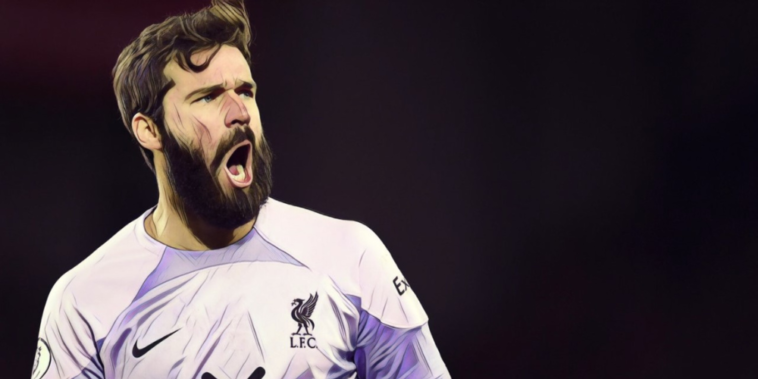 Alisson was the unlikely creator of Liverpool’s winning goal this weekend, as the goalkeeper’s quick-thinking released Mohamed Salah to score the winner against Manchester City at Anfield.

The Brazil international has now recorded three assists in the Premier League and we’ve decided to rank the goalkeepers to have created the most goals in the division’s history.

The Premier League goalkeepers with the most assists ever:

The former Wales international enjoyed a long career in the top flight, one which took in spells at Nottingham Forest, Middlesbrough and Fulham and saw him earn eight caps at international level.

The best spell of his career came during his stay at the City Ground, as Crossley spent more than a decade with Forest and made over 300 league appearances for the club.

Whilst his career passed without lifting silverware, Crossley is looked back on with great fondness by 90’s football fans and joins an exclusive list of Premier League goalkeepers to have provided more than one goal, registering an assist on three occasions.

Among a group of players at the forefront of expanding the sport in the US, Howard arrived in English football with Manchester United in 2003 before spending a decade at Everton.

The athletic American proved a hugely popular figure on Merseyside and established himself as one of the Premier League’s most reliable goalkeepers.

In an exclusive group of goalkeepers with a Premier League goal to their name, Howard is also among the most prolific assist providers, registering three during a lengthy career in England’s top flight.

Jaaskelainen signed for Bolton for just £100,000 in the late nineties and became a brilliant bargain, as he helped the club regain promotion to the Premier League before establishing himself as a club legend.

Despite often being linked with bigger clubs, the Finland international remained loyal to the Lancashire side and made over 500 appearances in all competitions. He was named as the club’s Player of the Year in 2006/07, after helping Sam Allardyce’s side qualify for Europe.

Jaaskelainen later joined West Ham and spent three seasons at the London club, before dropping down the divisions with Wigan.

One of just 16 goalkeepers to have kept over 100 Premier League clean sheets, Jaaskelainen also provided three assists during his 20-year stay in English football.

Regarded by many as the greatest goalkeeper in Premier League history, Schmeichel formed part of a Manchester United side that dominated English football throughout the nineties.

He won five league titles and the Champions League during a glittering career at Old Trafford and was named as the Premier League Player of the Season in 1995/96.

The Dane was a formidable presence in goal, though he was also recognised for influencing proceedings at the other end of the pitch, with superhuman long throws often launching United onto the front foot.

He later had spells with both Aston Villa and Manchester City and memorably scored for the former in a defeat to Everton in 2001 – becoming the first goalkeeper to score a Premier League goal.

2️⃣0️⃣ years ago today, Peter Schmeichel became the first 'keeper to score a goal in the #PL 🧤#OnThisDay pic.twitter.com/BeqGnpN16v

The 30-year-old’s assist was an almost carbon-copy of his first in the division against Manchester United, as he launched a long kick towards the Egyptian stood as the furthest man forward. On both occasions Salah did the rest, as he put the finishing touch on a lethal Liverpool counter.

Alisson has scored or assisted in each of Liverpool’s last four seasons 🤯 pic.twitter.com/kTFiNP8kZC

Alisson is also one of the goalkeepers to have scored a Premier League goal and the only shot-stopper to have netted with his head, after meeting Trent Alexander-Arnold’s corner to score a stunning stoppage-time winner against West Brom during the 2020/21 campaign. It was a dramatic moment and one which kept the Reds on course for Champions League football.

Rafael Benitez secured the signing of his compatriot at Liverpool in 2005, despite the heroics of current number one Jerzy Dudek in the Champions League final just months previously.

The signing proved to be a shrewd one as Reina established himself among the best goalkeepers in the Premier League, winning the Golden Glove award for three consecutive years between 2006 and 2008.

Reina provided four assists during his time in English football, including one perfectly weighted kick into the path of Albert Riera in a win over Aston Villa in 2009.

One of the great goalkeepers of the Premier League era, Seaman won two league titles under Arsene Wenger at Arsenal.

The former England number one formed part of a famed Gunners backline that prided themselves on defensive solidity, with only three goalkeepers in the division’s history having kept more than Seaman’s 141 clean sheets.

Four assists also came Seaman’s way during a 12-year Premier League career, with the goalkeeper later signing for Manchester City before his retirement from football in 2004.

The goalkeeper with the most assists in Premier League history is former Leeds, Spurs and Blackburn number one Paul Robinson, with the ex-England international having provided five goals during an almost two decade career at Premier League level.

Robinson’s booming kick proved a potent weapon throughout his career and led to an infamous moment as he scored against Watford in 2007. A long punt forward deceived Ben Foster in the opposing goal with Robinson’s fortuitous effort coming from all of 95 yards.