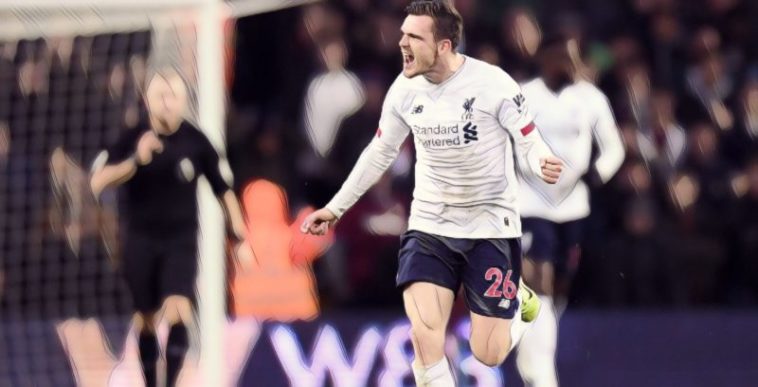 Andy Robertson has hailed Liverpool’s ‘resilience’ after the Premier League leaders scored twice late on to secure a dramatic victory at Aston Villa on Saturday.

Jurgen Klopp’s side had trailed to Trezeguet’s first-half goal at Villa Park heading into the final five minutes, before Robertson’s thumping header and a superb stoppage-time winner from Sadio Mane maintained the club’s six-point advantage over Manchester City at the top of the division.

The win was the latest result secured courtesy of a late showing from the European champions, and Robertson admits it was yet another demonstration of his side’s ‘resilience’.

“We have showed our resilience over the last 18 months and this season we have kept on going,” Robertson told Sky Sports.

“Today we knew we had some great chances and there’s nothing better than a last minute winner.

“Aston Villa are a team that just got promoted and pushed us to the end, we know we need to be at our best every single game.”

35 – Sadio Mane scored the 35th 90th-minute winning goal by Liverpool in the Premier League, 10 more than any other side in the competition's history; five of those have come since the start of last season, more than any other team. Clutch. pic.twitter.com/xQ9C5H6izh

Robertson admits the club’s latest win came as a relief after a below-par performance, with the 26-year-old praising match-winner Mane who also provided the assist for Robertson’s first league goal of the season.

“Today was not our best performance but we deserved the three points,” the Scotland international added.

“It was a perfect delivery from the corner and in the end I was even a bit lucky the ball went in.

“Aston Villa have been the team that pushed us harder so far, that’s why this is the best league in the world every single game can be like this one.”

Liverpool‘s next Premier League game is a mouthwatering clash with Man City at Anfield next weekend.