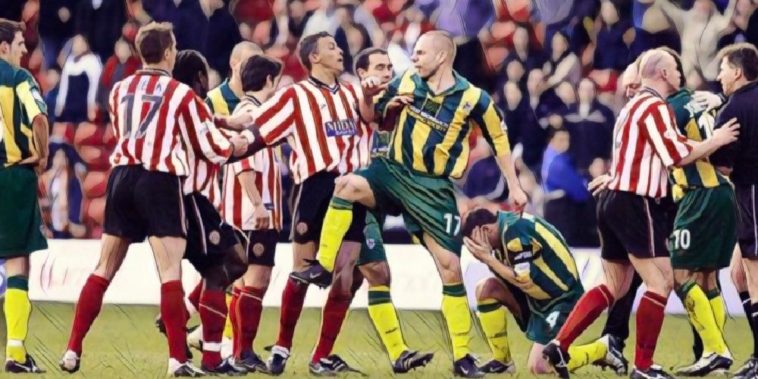 On March 16th 2002, a Championship game featuring Sheffield United and West Brom was abandoned, due to the home side having too few players to continue. It remains the only competitive fixture in English football history to be cut short for this reason.

It’s a league clash that has gone down in legend as the ‘Battle of Bramall Lane’ and so mindbogglingly crazy were the events that took place that afternoon it thoroughly warrants a watch on YouTube if you are unfamiliar with it, or a rewatch if you are (We’ve conveniently included a video a little further down in this piece). Before you indulge, however, read on, because if the main course is spicy, the entrée and dessert are pretty *chef’s kiss* tasty too.

The Baggies were chasing promotion that year and went into the game as favourites under Gary Megson, a manager who had previously been approached by the Blades but turned the offer down citing his lifelong support of their closest rivals, Wednesday.

The man who got the job instead was Neil Warnock, who for two seasons had steadied the ship in South Yorkshire, posting mid-table finishes and once again by this campaign’s end, United were well clear of a relegation scrap but also a long way adrift of the play-offs.

So West Brom went into this initially unremarkable, but ultimately infamous affair fancying their chances, and their chances further improved – and dramatically so – just nine minutes in when the home side’s keeper Simon Tracey handled the ball outside of his area. The referee, Eddie Wolstenholme, simply had no option other than to brandish a straight red card.

Nine minutes later, the visitors took the lead when Scott Dobie acrobatically headed home from close range on what looked like being a long afternoon for the hosts.

On the touchline meanwhile, Warnock was warned about his conduct. One of the most inflammatory managers in the game was getting far too het up.

We can only speculate what was said in the respective changing rooms at half time but it is very likely that Gary Megson was a cliché of professionalism – a ‘Here we are lads, going for promotion, a goal up and a man up. Do the basics right and get the job done,’ kind of message, one imagines.

As for Warnock, what swirling emotions must have been running riot within an individual not exactly known for tempering them. The match was very probably already lost with 45 minutes still to play, and all to a peer who had been the first choice for his job; a man who was close friends with members of his own club’s board.

Whatever was relayed in the inner sanctum of the Sheffield United dressing room will of course forever stay as conjecture, but what we know for sure is that on Warnock’s bench that day was a French journeyman midfielder by the name of Georges Santos while starting for the Baggies was the Welsh international Andy Johnson and if these two details seem somewhat incidental, they really are not. That’s because one year earlier these two players had clashed violently when Johnson was at Nottingham Forest, the Frenchman going in late but coming out of the contest infinitely worst off with a double fracture of his eye socket. He later threatened legal action while his boss Warnock called Johnson a liar for claiming he was innocent of any wrongdoing.

It should also be noted that alongside Santos on the sub’s bench as United toiled against the tide was Cameroon striker Patrick Suffo, who was not only a team-mate of Santos but a mate-mate. Again, this feels incidental. Again, it is not.

Just after the hour-mark, the result was no longer in doubt when the Baggies skipper Derek McInnes scored an absolute worldie from a corner. It was the kind of goal that usually grabs the headlines, only here, it is a forgotten gem, with Warnock’s immediate response to going two down was to bring on a pair of substitutes, and there are no prizes for guessing who they were.

It took a mere 90 seconds for a vicious kind of revenge to be enacted by Santos – let’s just say that subtlety was not his forte – when a loose ball was there to be won by both he and Johnson. The United midfielder had no interest in that, however, as he lunged two-footed – from a running start – onto Johnson’s shin. Had the Welshman’s foot been planted into the turf, his leg would have unquestionably been broken. As it was, he cartwheeled through the air, landing awkwardly and seemingly in a great deal of pain.

The Battle of Bramall Lane.

Includes one of the most x-rated tackles of all time, and some fine foreshadowing in the commentary box:

"Georges Santos has a bit of history with Andy Johnson. That first challenge will be interesting…"pic.twitter.com/wdO82HwWx1

The melee that ensued was markedly different to the typical fare we see after such an incident. This was no ‘handbags’ and there were no players preening like chancers outside a nightclub after being refused admission by a bouncer four times their size. This was collective fury meeting collective fury, evidenced best by West Brom’s man-mountain Darren Moore needing four men to restrain him.

And just as the fracas was calming down, and right in front of an overwhelmed Wolstenholme, Suffo headbutted McInnes square on the eyebrow, drawing blood. A butt? It was more of a launch in truth. A head-launch.

That meant that for the third time, the referee had no choice other to reach into his back pocket and show red, and with United down to eight men and having used all of their allotted subs, the game was now in serious danger of being abandoned. Should the Yorkshiremen be depleted any further, Wolstenholme would be obliged by the laws of the game to call a premature halt.

Obviously, the matchday official was acutely aware of this, as too were both sets of players, and this fully explains the frankly bizarre few minutes that followed as the remaining Sheffield United players on the pitch went rogue.

First Michael Brown hauled McInnes to the ground, preventing a counter-attack and having already been booked, his fate seemed sealed. However, the West Brom captain sprang up, shook his opponent’s hand and insisted to Wolstenholme that he had barely been touched which left the unfortunate official with a dilemma. Either he could adhere to the rules of the game and leave the Blades too reduced in number to continue,  or he could ignore the tenets of his occupation and attempt to complete 90 minutes. Rightly or wrongly, he went for the latter.

So, a few minutes later, United defender Keith Curle had a go instead, and if Brown’s effort to see red lacked all nuance, this was an actual assault.

Once again McInnes was involved – the Baggies skipper undoubtedly a marked man – and as he approached the opposition penalty area, Curle flew in at force, first connecting with his target with a clumsy swipe of the leg, then landing a series of slaps on McInnes’ back. For good measure, the veteran defender then swept his trailing leg across his man to ensure he went to ground.

When Curle looked up and only saw a yellow card he cast a rueful smile in the direction of his bench.

Soon after, West Brom scored for a third time, and with it becoming increasingly apparent that Wolstenholme had no intention of dishing out any more punishment, Michael Brown and Robert Ullathorne then took matters into their own hands by going down with injuries, or at least that’s how Gary Megson later saw it.

Finally, with seven minutes still to play and with United now made up of six available players, two injured passengers and three sent for an early bath, the referee ceded to the unavoidable and blew his whistle on a quite extraordinary contest.

Accusations that the Blades had cheated by forcing an abandonment came thick and fast from the press and public alike, while an incensed Megson later said: “Everybody, every single person with half a brain knew exactly what was going on.

“I remember telling the players, ‘Don’t go near them, don’t give anybody an excuse to go down injured’, because I could just feel what was going on. Unfortunately, Robert Ullathorne pulled his hamstring stood all on his own.”

That last line just drips with sarcasm, but for the record, Ullathorne missed the next four fixtures through injury while Brown didn’t feature again for the rest of the season. The same can be said too of Santos and Suffo, though bans doled out by a disgusted FA saw to that. Santos was released that summer while Suffo left for Spain.

As for the managerial relations between Warnock and Megson, that predictably went from frosty to ice-cold. The West Brom boss has since repeatedly pointed out the discrepancy in calling that surreal afternoon a ‘battle’ as that implies both sides were at it. As for Warnock, he was later asked for his opinion on his opposite number. “I wouldn’t piss on him if he was on fire,” was his course response.

Perhaps the last words though should go to Patrick Suffo, one of two disgraced substitutes who didn’t actually touch the ball, as a Championship game imploded into pure farce and controversy. In 2020, the Cameroon international was asked to recall that fateful afternoon and his answer is revealing indeed.

“When I look back at my career and at the highlights, that game is right up there with winning the Olympics and playing in the World Cup”, he stated proudly.

There was no replay incidentally, only recriminations from the FA. Soon after, West Brom were promoted.