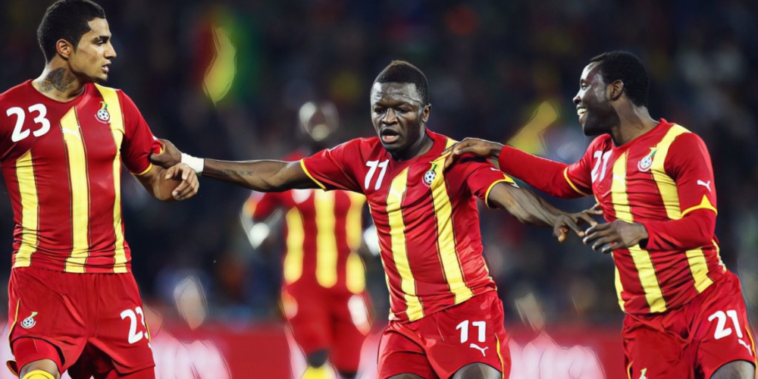 England will take on Senegal in the World Cup’s last 16 this weekend, with the African nation having followed up their AFCON success earlier this year with progress to the knockout stages in Qatar.

Aliou Cissé’s side secured wins over Qatar and Ecuador to finish as runners-up in Group A, in the process becoming just the sixth African side to reach the World Cup’s last 16 since the turn of the millennium.

We remember the previous five African nations to have achieved the feat this century.

Senegal became the first African team to reach the knockout rounds following the turn of the millennium, as the nation enjoyed a World Cup debut to remember in Japan and South Korea.

The opening fixture of the tournament saw Senegal upset holders France in Seoul, with Papa Bouba Diop bundling in a famous winner against the world champions.

El Hadji Diouf was the star name in the side and was named in the World Cup’s All-Star team after helping Senegal to the quarter-finals. After an unbeaten group stage campaign that saw France beaten and both Denmark and Uruguay held to draws, the Senegalese edged past Sweden in the last-16 before an extra-time defeat to fellow surprise package Turkey in the quarter-finals.

It was just the second time an African nation had reached the last eight, after Cameroon had first achieved the feat in 1990.

Ghana reached the knockout rounds on their World Cup debut in 2006, bouncing back from an opening defeat to eventual champions Italy with back-to-back wins over the Czech Republic and United States.

Asamoah Gyan opened the scoring against the Czech Republic – semi-finalists at Euro 2004 – after just 70 seconds, before Sully Muntari secured a first World Cup win for the Black Stars. A controversial penalty then helped Ghana to a 2-1 win over the USA, a result which booked a last-16 meeting with Brazil.

It proved a step too far against the holders, as Ghana – who had Gyan sent off – fell to a 3-0 defeat in a fixture that saw Ronaldo become the highest scorer in World Cup history with his 15th goal at the finals. Adriano and Ze Roberto were also on the scoresheet as Brazil ended Ghana’s campaign and eased into the last eight.

Ghana made it back-to-back appearances in the knockout rounds during a memorable tournament in South Africa in 2010.

Expectations were high ahead of the first World Cup ever staged in Africa and Ghana became the flag-bearers for African football with a run to the quarter-finals.

Asamoah Gyan led the charge with three goals, with efforts from the penalty spot against Serbia and Australia ensuring Ghana progressed as runners-up to Germany in Group D.

Gyan then scored the winner as Ghana beat the United States 2-1 in extra-time in the last 16, after the USA had topped a group containing England. Their bid to become the first ever African team to reach the semi-finals ended against Uruguay however, following an extraorindary conclusion in Johannesburg.

Ghana were set to become the first African side to reach the last four when Luis Suarez was sent off after handling a goal-bound effort on the line in the final seconds of extra-time. However, Gyan blazed the spot-kick onto the crossbar with the last kick of the game and the Black Stars were beaten on penalties in the resulting shootout.

It was heartbreak for Ghana, with the images of Suarez celebrating wildly from the tunnel area making him public enemy number one.

Algeria booked their place in the last 16 for the first time in 2014, recovering from an opening defeat to Belgium to reach the knockout rounds.

Vahid Halilhodžić’s side beat South Korea 4-2 in an entertaining group stage clash, before coming from behind to earn a draw with Fabio Capello’s Russia and a place in the last 16.

Algeria took on Germany in the last 16 and pushed the eventual champions hard in an extra-time defeat, with the African side wasting a number of good goalscoring opportunities in an entertaining encounter.

In the Round of 16 they proved to be a real test for Germany taking them to extra time⏱ pic.twitter.com/yUh96QDCg8

Extra-time goals from Andre Schurrle and Mesut Ozil eventually saw Germany through, but Abdelmoumene Djabou’s late volley set up a nervous finish. It was an impressive performance from Algeria, against a Germany team who went on to beat France, Brazil and Argentina on route to being crowned world champions.

The 2014 tournament remains the only time that two African nations have reached the World Cup’s knockout rounds.

Nigeria joined Algeria in the last 16, securing progress from the group as runners-up to Argentina. A goalless draw with Iran and a 1-0 win over Bosnia put the Super Eagles in pole position to qualify and results elsewhere saw Nigeria through despite a 3-2 defeat to Argentina in their final fixture.

Preparations for the knockout rounds were thrown into chaos however, as the Nigerian squad boycotted training in the build-up due to a row over bonuses.

Stephen Keshi’s side met France in the last 16, but fell to a 2-0 defeat as two goals in the final 11 minutes saw Les Bleus through. Paul Pogba broke the deadlock as he headed in France’s first, before Joseph Yobo diverted Mathieu Valbuena’s cross into his own goal to put the result beyond doubt.

It was the first time Nigeria had reached the last 16 since back-to-back appearances in the knockout rounds in 1994 and 1998.