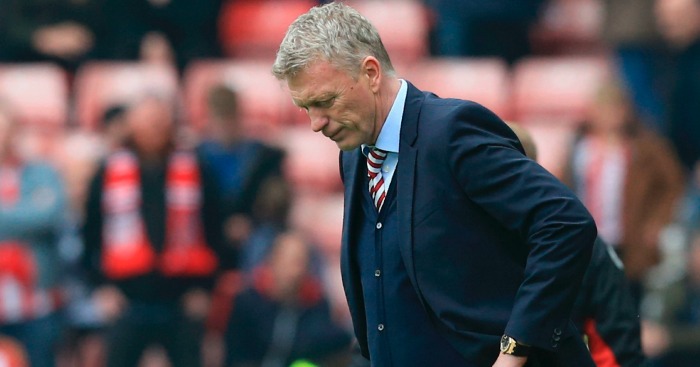 After a 1-0 defeat at the hands of Bournemouth, Sunderland have been confirmed as relegated despite a fairly spirited performance – a rarity on Wearside this season.

A 2-0 defeat at the hands of an almost dead and buried Middlesbrough side last weekend summed up a disastrous campaign for Sunderland, with the Black Cats managing just 21 points and 5 wins this season under the leadership of David Moyes.

For many months it has been clear that The Stadium of Light would not play top flight English football next year. Despite the inevitable disappointment and frustration of relegation, I believe that Sunderland can bounce back from the Championship and reap the rewards of time spent in rebuilding their squad in order for a swift return to The Premier League.

This season has not been a blip for Sunderland. The club has been caught up in relegation battles for a number of seasons now.

Their highest finish in six years has been 13th place – hardly the standards of a club who have six league titles in their trophy cabinet, albeit the last of these being won in 1936.

In recent years, Sunderland have employed a tactic of sacking their manager towards the end of the season when they look doomed, only to develop a miraculous turnaround in form and narrowly survive.

This, despite having been effective, is in not a sustainable way to run a football club and provides no way of progressing.

Relegation therefore could be better looked at as Sunderland taking one step back to take two forward.

Newcastle can be their inspiration

Sunderland’s neighbours Newcastle confirmed their promotion recently with a convincing 4-1 win over Preston. They have returned to the Premier League at the first attempt after a summer when they brought in a series of Premier League quality players in Dwight Gayle, Deandre Yedlin and Matt Ritchie whilst holding onto talents such as Jonjo Shelvey.

This has allowed Newcastle to record a record number of away victories in the Championship. A 2-0 win against Cardiff City was the 14th time the Magpies had picked up three points on the road this season.

The squad is now arguably of a higher quality than it was the previous season and there is a renewed sense of optimism at St James’ Park, something that had been missing before.

Sunderland are in a similar situation to Newcastle last year. There is an obvious disconnect between the fans and the club, demonstrated by an almost empty Stadium of Light at the full time whistle of the match that sealed their fate. A successful season in the Championship could detoxify the atmosphere around the club and get the fans fully behind the team once again.

The cause of Sunderland’s struggles is not difficult to spot. Their players are simply not good enough.

The team has been dependant on goals from talisman Jermain Defoe in order to pick up any points this season. In addition to Defoe’s goals, young goalkeeping talent Jordan Pickford has kept them in many games with fine saves each week.

Pickford can be one of only few positives to come out of this season for Sunderland and they face a struggle to keep hold of both him and Defoe in the summer, with many Premier League clubs interested in the pair.

Due to the high likelihood of the loss of at least two of the club’s key players, it is crucial that whoever is in charge come July is given full financial backing in order to strengthen the team in preparation for a tough season.

Who should be in charge is a hotly debated topic by the club’s fans. Many believe that the club was doomed before a ball had been kicked; even David Moyes admitted that the club would be caught up in a relegation battle.

Having said that, many fans believe that Moyes has been tactically inept in many crucial games this year and are of the opinion that a new manager could be a breath of fresh air for the club.

No matter who is at the helm, they have no given right to simply return to the Premier League. It has been obvious at Aston Villa that just being a “big club” does not get you anywhere in a league as tough as the Championship.

Relegation does not mean disaster for Sunderland. If the squad is strengthened and results start flowing there is a great opportunity for the club to push on to promotion and once again become an established Premier League side.

However, if the situation is mishandled the club could be subject to “a wee slap” from the Championship.