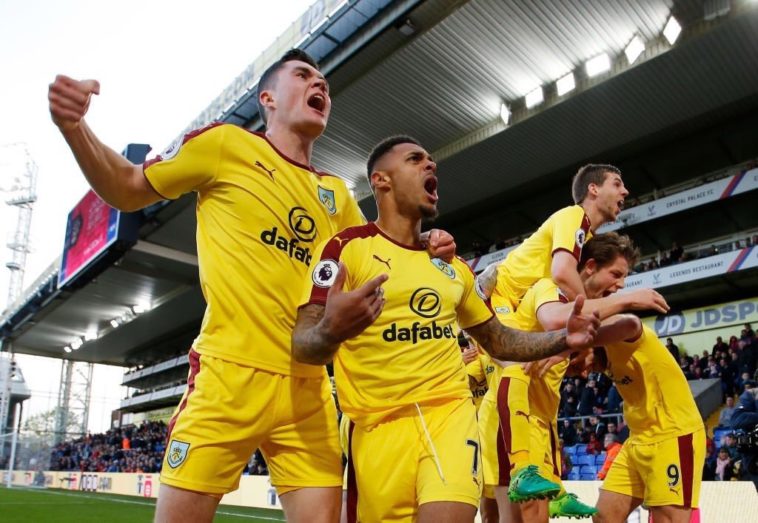 Burnley’s winless run away from home finally ended at Selhurst Park as Sean Dyche masterminded an excellent performance to see the Clarets take a huge step towards safety.

An early goal from Ashley Barnes and a late sucker punch from Andre Gray were enough to see the Clarets travel back to East Lancashire with three precious points.

In truth, Burnley were never really troubled by Palace, and dealing with long balls into the box was about as tough as it got for the Clarets back line.

Palace started the game brightly, and a sustained period of pressure, which resulted in a few corners, had the Clarets on the back foot, but it would be a counter attack to undo the Eagles defence.

Sam Vokes stole possession 25 yards from the Palace goal and some neat play from Ashley Westwood released Stephen Ward. His cross found Barnes, who finished at the second time of asking through the legs of Wayne Hennessey.

Barnes thought he had extended Burnley’s lead a few minutes later, when he brought down Michael Keane’s knock down and scuffed the ball past the Palace keeper. Referee Bobby Madley cut short the celebrations as he ruled the goal out after an alleged handball.

Vokes was next to try his luck, when a cross from the left wing landed on his head. His powerful, downward header was smartly saved by Hennessey.

Luka Milivojevic was then presented with a golden opportunity to draw the scores level.  He found himself unmarked, 12 yards out from a corner, but smashed his effort wide.

Palace didn’t create many chances of note, but felt they could have been awarded a penalty mid-way through the first half. Jon Flanagan tried to steal the ball ahead of Wilfried Zaha and caught the Palace winger, but the referee waved play on.

The Clarets didn’t threaten much in the second half, but as Palace began to push forward, gaps started to appear in the Eagles defence. Sam Vokes was the man to exploit those gaps, and when he nicked in front of Martin Kelly, he was 1 v 1 with the keeper, but a heavy touch on the edge of the area lead to him squandering the chance.

Andre Gray was introduced by Sean Dyche and not long after being brought on found himself bearing down on goal. An exquisite ball by George Boyd set him free and he made no mistake in slotting home past Hennessey. 2-0.

With Gray’s goal, went any Palace hopes of getting back into the game, and Burnley had found that elusive away victory.

All in all, a brilliant night for Burnley. Premier League status for next season is all but assured and the burden of being without an away win, is no more.

As for Palace, they shouldn’t be in much danger of going down, and your would imagine that two more points will assure their safety.