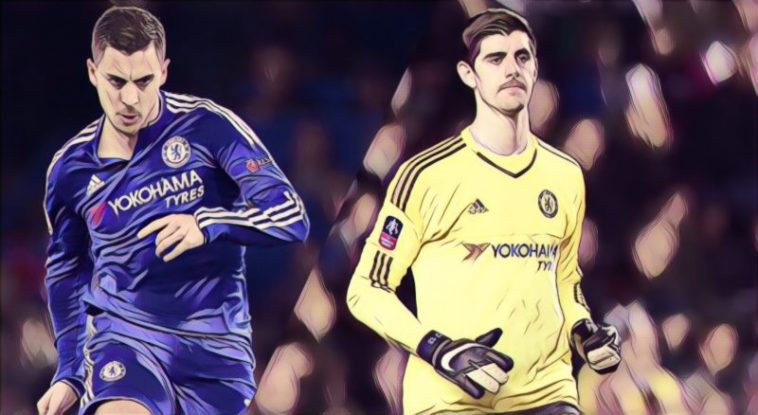 Real Madrid are preparing a double raid on Chelsea, with the European champions said to be readying moves for Thibaut Courtois and Eden Hazard.

Los Blancos have long been searching for a new goalkeeper with club President Florentino Perez wanting to replace current number one Keylor Navas with a ‘galactico’ style signing.

While they have long been linked with David de Gea, the Spaniard is expected to sign a new deal with Manchester United, leaving Real to turn their attentions the Chelsea ‘keeper Courtois.

The Belgian has just one year remaining on his deal at Stamford Bridge, with reports suggesting the Blues are willing to cash in on him rather than allowing him to leave for free.

Real Madrid are also in need of bolstering their attacking options in order to close the gap to Barcelona, who ran away with the La Liga title last year, as well as trying to replace club record goalscorer Cristiano Ronaldo, who his ending his nine year stay at the club to join to Juventus.

They have been linked with PSG pair of Neymar and Kylian Mbappe, as well as Chelsea’s Eden Hazard who has enjoyed an excellent World Cup for Belgium this summer.

While the club have publicly announced they will not be making a move for Neymar, and Mbappe confirming he will also be staying with French Champions, a move for Hazard seems like the next best option.

Now, according to reports today, that is exactly what is happening, with Real said to be ‘readying’ a move for the two Chelsea stars.

Speaking after his involvement in this summer’s World Cup, and with Chelsea once again not involved in Champions League football next season, Eden Hazard suggested that he will be leaving the club this summer.