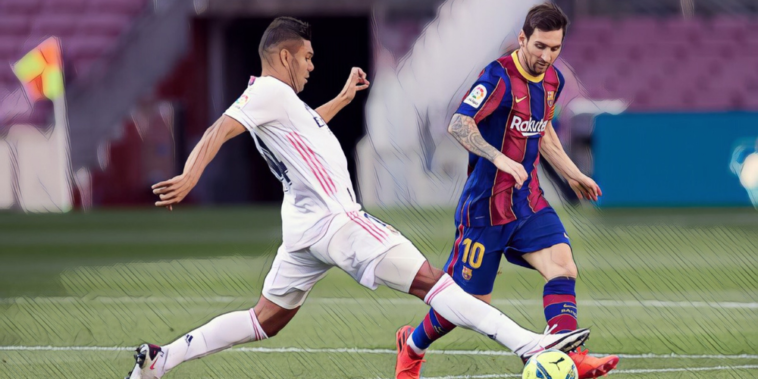 Just two points currently separate the two teams in the La Liga title race as they bid to catch leaders Atletico Madrid, as second-placed Barcelona travel to the Bernabeu in a fixture neither side can afford to lose.

The two sides may have fallen on slightly harder times of late, but both remain packed with talent and there will be some huge names on show ahead of Saturday’s showdown.

After a testing start to his time in the Spanish capital, Thibaut Courtois has bounced back to establish himself as an integral part of the Real Madrid side.

The Belgium international ranks third in the division for both save percentage and clean sheets this season, ahead of Barcelona’s Marc-Andre ter Stegen on both metrics.

Courtois was named as winner of the Zamora Trophy in 2019/20 after conceding just 20 goals in 34 games, his performances helping Real Madrid to the title for the first time in three seasons and he will be crucial to the club’s hopes of retaining their crown.

Lucas Vazquez has performed admirably at right-back for Real Madrid this season in the ongoing absence of the injured Dani Carvajal, the winger-turned-full-back excelling as a forward flying defender down the right.

Vazquez has scored twice and provided four assists for the Spanish champions this season, his performances having attracted interest from across Europe with the 29-year-old set to be available on a free transfer this summer.

His expected exit will see Real Madrid lose a valuable player with Vazquez’s versatility a priceless commodity to Zinedine Zidane.

Raphael Varane looks likely to miss this weekend’s crunch clash after contracting coronavirus, the defender’s absence set to be a major blow to Real’s hopes of securing a positive result.

Varane has established himself as one of the leading centre-backs in world football during a decade of success in the Spanish capital, winning three league titles and four Champions League trophies – alongside the World Cup with France – amongst his honours.

The 27-year-old plays the game in an elegant style, rarely seeming to make a tackle such is his ability to stay ahead of opposition forwards with elite reading of the game.

Love him or loathe him, there has been no missing Sergio Ramos over a career spanning almost two decades, the Real Madrid captain an irreplaceable figure at the heart of his side’s defence.

Ramos is a footballer whose will-to-win knows no boundaries, a ferocious competitor and the spiritual leader Spanish football’s most successful side.

So often the man for the big occasion, his absence through injury this weekend leaves Madrid without one of their most influential figures, the likes of Eder Militao and Nacho having huge boots to fill.

Jordi Alba has played some of the best football of his career this season in a welcome return to his finest form, the left-back’s performances earning him a recall to the Spain squad where he impressed during March’s World Cup qualifiers.

The 31-year-old has scored five goals and provided a huge 12 assists for the season so far in all competitions, attacking returns which see him edge the impressive Ferland Mendy for a spot in our combined side.

Often a tour-de-force at the heart of the Real Madrid midfield, Casemiro’s willingness to engage in the uglier side of the game provides the Spanish side with the perfect foundation.

The Brazilian ranks amongst the division’s top three players for tackles won and interceptions, whilst he is also amongst the league leaders for successful pressures as he hunts the ball aggressively in the Madrid engine room.

Casemiro’s all-action style allows the likes of Toni Kroos and Luka Modric to dictate possession around him, Real undoubtedly an inferior side whenever he is absent.

Toni Kroos remains a frighteningly good footballer with his statistical numbers making incredible reading, the Germany international having completed a staggering 93.5% of his passes so far this season.

Kroos’ stunning statistics come despite leading La Liga for passes into the final third, whilst he trails only Lionel Messi for key passes amongst all players in Spain’s top tier.

The 31-year-old produced a stellar showing as Real Madrid beat Liverpool 3-1 in the Champions League in midweek and will be looked to once again to exert composure and control in the heat of an El Clásico battle.

Real Madrid’s diminutive playmaker makes it a full house for Los Blancos in our midfield three, Modric remaining one of the game’s great midfielders even in the latter stages of his career.

When Modric and Kroos are at the best it can often appear as if opposition players are simply chasing shadows, lending possession to one another and keeping the ball moving on a constant conveyor belt between white shirts.

The 35-year-old has shown few signs of slowing down, continuing to provide energy and a touch of class to Zinedine Zidane’s midfield.

For many, quite rightly, still the best footballer on the planet.

Messi continues to shine as the game’s leading light for Barcelona, having scored 23 goals and provided eight assists in just 25 league starts during the current season.

The six-time Ballon d’Or winner appears set to finish as Spain’s leading scorer for a fifth consecutive campaign, whilst he leads the division in a staggering number of metrics including goals, key passes, shots and expected assists.

His form since the turn of the New Year has been incredible with 16 goals in just 13 appearances and Real Madrid know better than most that he remains the man they must contain.

Griezmann’s move to Barcelona has not yet hit the heights most expected, but he remains one of the continent’s finest forward players and a more than capable member of Messi’s supporting cast.

The 30-year-old has provided 14 goals involvements (eight goals, six assists) in 24 league starts and will be hoping to make a significant impact on club’s football’s biggest game this weekend.

Griezmann has starred on the biggest stage for club and country in recent years and a fine performance on Saturday will go some way to silencing his doubters at the Camp Nou.

Real Madrid’s leading goal threat and a player who will be under a weight of expectation this weekend, Karim Benzema has taken on talismanic status in the seasons since Cristiano Ronaldo’s departure.

Benzema has scored 81 goals over the past three seasons including 18 in the league this term, a figure behind only Lionel Messi, Gerard Moreno and Luis Suarez amongst La Liga’s leading scorers.

The 33-year-old remains as crucial as ever and his selfless style of play is tailor-made for the Real Madrid attack, linking the play with the club’s attacking options and finding space between opposition defenders.

With 273 goals in all competitions for Los Blancos, the Frenchman is now fifth amongst the Spaniard’s all-time record scorers.