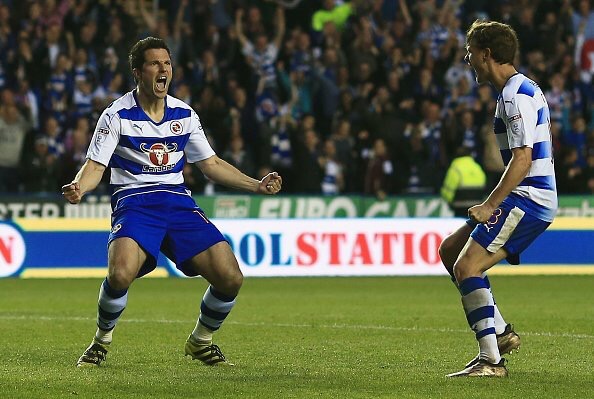 Reading have booked their ticket to Wembley for the Championship Play-Off Final after defeating Fulham 2-1 on aggregate. The Royals will face Sheffield Wednesday or Huddersfield Town at Wembley for a place in the top-flight.

Following a 1-1 draw in the first-leg, Reading hosted the second-leg at the Madjeski Stadium. With the tie all square, it was sure to be a tense and tight affair for both sides.

Fulham dominated the opening 30 minutes of the first-half with the Cottagers putting Reading to the sword on a number of occasions. However Jaap Stam’s side weathered the storm, as they were forced to sit on the back foot for half and hour.

Despite dominating possession, this was essentially Fulham’s best chance to take the lead. Based on their performance in the opening half and hour, they will be disappointed they didn’t convert their possession.

As the first-half progressed into the latter stages, Fulham continued to mount pressure on Reading. The away side remained resolute to their game-plan. Furthermore they also proved to be very physical opponents for the Royals, more notably in the first-half.

Reading were presented with half a chance of their own. on the 32nd minute, striker Lewis Grabban scuffed a chance to put the Royals in front, however his effort was tame. This was Reading’s best chance in the first-half.

Both sides headed into the break goalless. Fulham dominated the opening half, in contrast to Reading who were forced to sit deep for majority of the half, with few chances or spells in possession to spare.

Yann Kermogrant Goal From The Spot

After the restart, Reading came out galvanized and less than three minutes after the break, they were awarded a penalty. Fulham defender Tomas Kalas was penalised for handball in the box, after Yann Kermogrant chased onto a ball played over the top.

Subsequently Reading’s top goalscorer Yann Kermogrant converted the penalty, which handed Reading a 1-0 lead on the night, as well as a 2-1 lead on aggregate.

Fulham will feel hard done by with the decision, none the less Reading came out in the second-half stronger.

Reading could in fact have taken the lead just moments before the penalty, as Grabban once again missed a great chance to give the Royals the lead. His header was directed straight into the arms of Fulham keeper Marcus Bettineli.

Despite going behind, Fulham would go on to renew their pressure. Sone Aluko proved to be a thorn in the side of the Royals defence, as he managed to slip in between on a number of occasions, none the less similarly to the first-half, Reading stood firm.

Ali-Al Habsi made a string of great saves, which kept his side in-front. The club’s voted player of the season was impressive between the sticks in the second 45. The Oman International wonderfully saved an effort from Aluko, which looked destined for the back of the net.

Once more Al Habsi then denied Fulham substitute Chris Martin from equalising, adding to his portfolio of great saves.

The Cottagers continued to mount the pressure on Reading as they pushed for an elusive equaliser to force the game to extra-time but it wasn’t to be.

Reading booked their place in the Championship Play-Off Final, their first since 2011. The Royals will be delighted to see their resilience pay-off, as they stuck to their game plan and stood tall.

As for Fulham, they will be disappointed they could not break the Royals down, as well as the prospect of another season in the second-tier after a great end to this current campaign.

Jaap Stam and his side now await their opponents for the Play-Off Final. They shall face either Huddersfield Town or Sheffield Wednesday, on Monday May 29th.