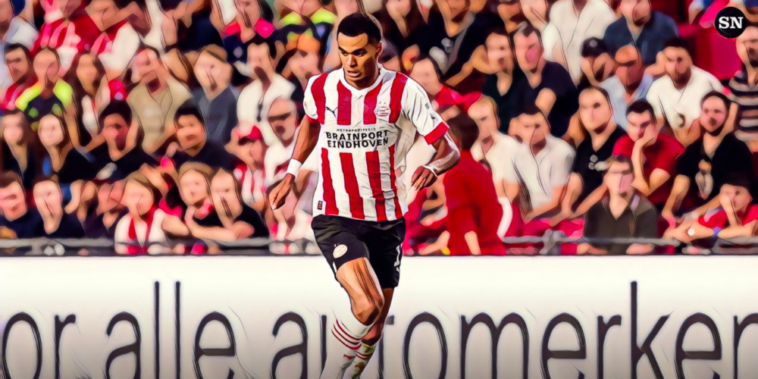 The transfer rumour mill has hit overdrive in the final weeks of the window with Manchester United dominating the speculation.

Erik ten Hag’s reign has began in disastrous fashion with back-to-back defeats leaving the Red Devils bottom of the Premier League and the club are desperately searching for new additions in the closing stages of the transfer period.

You don’t have to look far for a rumour regarding the Red Devils and we’ve decided to look at some of the many names linked with Old Trafford.

Here are our ratings of the quality and suitability of 21 players linked with Manchester United this week.

United agreed a fee with Juventus to sign Rabiot last week, before withdrawing from deal after failing to agree personal terms with the France international.

The 27-year-old has won a number of major honours at PSG and Juventus, but has also been no stranger to controversy or conflicts with past coaches.

Adrien Rabiot’s camp told Juventus they have no intention to reduce the salary requests – no way for Man United deal. 🚨 #MUFC

Manchester United now working on conditions of Casemiro deal, also Carlo Ancelotti will be key factor in the conversations with the player.

His extortionate demands were perhaps a blessing in disguise for United. Had he arrived, he may have created more problems than he fixed.

Cristiano Ronaldo’s uncertain future has placed the signing of a forward on the club’s agenda, with reports this week of a British transfer record offer for Joao Felix.

The 22-year-old signed for Atletico Madrid in a £113m deal three years ago and has since scored 30 goals in 111 appearances for the Spanish side.

Felix has flattered to deceive at Atletico, with a mix of expectation, injuries and Diego Simeone’s pragmatism failing to bring the best from a forward brimming with talent.

Manchester United have had a €130m offer for Joao Felix rejected by Atletico Madrid, according to AS ❌ pic.twitter.com/CZ9hyS7cNp

His arrival would represent a risk at such a fee, but one with huge potential upside.

The deal that appears closest to completion, negotiations are understood to be progressing positively between United and Real Madrid.

Casemiro’s arrival would represent a significant statement for United and end the club’s search for a defensive midfielder with one of the best in European football. The Brazil international has won three league titles and five Champions League trophies at Real Madrid, forming one of the most successful midfield trios of the modern era.

Casemiro, Kroos and Modrić have never lost a final that they've all started in for Real Madrid. 9 finals. 9 wins. The Bermuda Triangle. pic.twitter.com/xVdLx5e156

However, he will turn 31 next season and at a reported €60m represents a significant fee for a short-term investment, one deemed necessary as a result of poor planning and recruitment.

It has been six seasons since either Liverpool or Manchester City purchased a player aged over 30 and the most recent additions of that profile for both clubs were short-term stopgaps to add depth.

Casemiro will be expected to stabilise Ten Hag’s team and take United back into the top four. Only if this is achieved over the coming seasons, will his expected arrival be deemed a success.

Unconvinced that either Diogo Dalot or Aaron Wan-Bissaka are the solution at right-back, Ten Hag has been linked with a move for Meunier.

The Borussia Dortmund right-back has been a consistent performer at the top level of European football for some time, but will turn 31 next month.

A modest fee could make sense but the Belgian would again be another signing made with the short-term in mind.

Leicester are in the process of fending off the wolves for a number of key figures, though few expected Jamie Vardy to be the subject of transfer talk.

United have been linked with a move for the forward, who has averaged 18 league goals across the last seven Premier League campaigns.

It would be fascinating to see Vardy leave the comforts of the King Power, but a forward who will turn 36 in January is not the long-term solution to United’s issues.

Icardi can be placed in the same file as the aforementioned Rabiot. Talented, temperamental, and occasionally trouble.

The Argentine is free to leave after finding himself behind Paris Saint-Germain’s superstar front three, with both United and Newcastle linked with a loan move.

A loan move could make sense for a forward who scored 111 goals in 188 league appearances for Inter Milan, but there would be potential for risk alongside reward for United with Icardi no stranger to scandal.

After returning from a disappointing loan spell at Atletico Madrid in 2020/21, Dembele re-cemented his status as one of the best forwards in Ligue 1.

The 26-year-old scored 21 goals in 30 games for Lyon last season and has been linked with a return to British football, having had spells with Fulham and Celtic before moving to France.

However, the striker has reiterated he will only move to the 'right club'. 🤔 #mufc pic.twitter.com/O8aMVOuHSC

Perhaps not a glamour signing, but Dembele has experience of England and a fine goal record having netted 53 in 106 league appearances for Lyon. A potentially useful option to add depth at centre-forward.

Ageing and exiled at Arsenal last season for alleged disciplinary breaches, Ten Hag may look for alternatives as he looks to reset the culture at Old Trafford.

A record of 13 goals in 23 games at Barcelona last season proved Aubameyang will still contribute goals, but his arrival would be another short-term signing.

Morata struggled during a previous spell in England at Chelsea, as he failed to deal with the scrutiny of his performances in the Premier League.

That pressure would be ramped up even more at Manchester United. While a fine footballer, the 29-year-old has often worked better with a partner and has reached 15 league goals just once in his career.

Having returned to Atletico Madrid from a two-year loan at Juventus, a brace on La Liga’s opening weekend suggests a return to favour in the Spanish capital.

The Switzerland international would provide strong competition and cover for De Gea and with 12 months remaining on his deal could be available for a cut-price fee.

At the right price a deal makes sense for the 33-year-old, following the decision to loan out Dean Henderson.

Christian Pulisic’s frustration at Chelsea has increased rumours of an exit, with United considering an approach to sign the winger on loan.

Pulisic has struggled to showcase his best since joining the west Londoners due to fitness and favour problems, but at his best can be an electric presence in the front three.

A loan deal – perhaps with a view to a permanent move – makes sense so funds can be concentrated elsewhere.

Erik ten Hag has been linked with a move for Hakim Ziyech, another of Chelsea’s cast of creatives who have failed to find their fit at Stamford Bridge.

Ziyech provided 130 goals and assists in just 165 games for Ajax, but has failed to replicate those performances in the Premier League despite flashes of real quality.

The 29-year-old could fill a problem position on the right flank for the Red Devils, while a reunion with Ten Hag could help bring the best from the Moroccan.

Neither Ziyech or Callum Hudson-Odoi have featured for Chelsea in their first two games of the Premier League season, with the latter also open to an exit in search of regular minutes.

Hudson-Odoi created huge excitement upon his initial emergence, but has so far failed to fulfil his early potential amid a lack of regular opportunities.

At 21, there is time for Hudson-Odoi to overcome his injury problems and a failure to pin down a position as his own.

A top target for Ten Hag, Ajax have so far priced Antony out of a move to the Premier League.

Summer exits in Amsterdam mean Ajax are under no pressure to sell and United have been unwilling to meet an asking price in the region of £67m.

Should either side budge, the Brazilian would provide a real injection of quality into the club’s forward line and he impressed with 12 goals and 10 assists for Ajax last season.

Antony’s arrival would solve the club’s right-wing issue and at 22, he would represent a signing for both the present and long term.

Another name familiar with Ten Hag, Dest’s exciting emergence at Ajax led to a €21m move to Barcelona after just one season of senior football.

The right-back has failed to establish himself in Spain despite 72 appearances across the past two campaigns and could be allowed to leave with United monitoring his situation.

A 21, he could prove a long-term solution to the club’s right-back problem.

Brighton’s willingness to allow Yves Bissouma to leave this summer was in part due to a ready-made replacement sitting in their ranks.

Since breaking into the Seagulls’ last during last season’s run-in Caicedo hasn’t looked back and stamped his authority on the midfield during Brighton’s win over United on the opening weekend.

United overlooked a £4m deal for the 20-year-old before his move to Brighton, despite scouting the exciting Ecuadorian. He’ll cost considerably more than that now.

United look to have cast multiple lines out in the hope to catch one fish, with several of the club’s rods faced in the direction of the Spanish capital.

Joao Felix, Alvaro Morata and Matheus Cunha have all been linked with swapping Madrid for Manchester, with the latter having struggled for a regular role at Atletico since arriving last summer.

Despite a modest goal record, Cunha has the raw attributes to impress in the Premier League and his combination of work-rate and skill would add much-needed presence to United’s forward line.

United have been linked with making the goalkeeper the next Leeds favourite to cross the Pennines, with David de Gea’s calamitous kicking having hastened the need for adequate back-up.

Meslier has had to learn on the job as the Premier League’s youngest first-choice goalkeeper, often proving rather busy behind a Leeds defence that has leaked goals.

Leeds have no intention to negotiate with Man United for Illan Meslier. The French goalkeeper is now considered ‘untouchable’ and key part of the project. 🚨⚪️ #LUFC

Man Utd are working to sign a new GK with Sommer in the list, but also tempted by Gladbach new deal bid. #MUFC pic.twitter.com/pwYpmA8yIi

Jesse Marsch’s side are unlikely to part with the Frenchman easily, while Meslier might have second thoughts about swapping number one status at Leeds for a supporting role.

An experienced back-up option and little else. Is he any better than Tom Heaton?

Unlikely to push De Gea as first-choice, but equally unlikely to have to relocate from his current home should United pursue a deal. Swings and roundabouts.

Hard-working and versatile, Carrasco is capable of fulfilling a number of roles down either flank and would add a Swiss Army knife option to Ten Hag’s squad.

At a reported fee of £25.5m, there would be significantly worse investments on this list than the 28-year-old, who has contributed 12 goals and 16 assists across the last two La Liga campaigns.

The reigning Dutch Footballer of the Year after a brilliant season at PSV Eindhoven, Gakpo has emerged as an option for the Red Devils after a campaign that saw the winger score 21 goals and provide a further 15 assists.

Recruiting from the Eredivisie is notoriously hit and miss, however, and United will hope Gakpo is more Ruud van Nistelrooy and less Memphis Depay should a deal materialise.