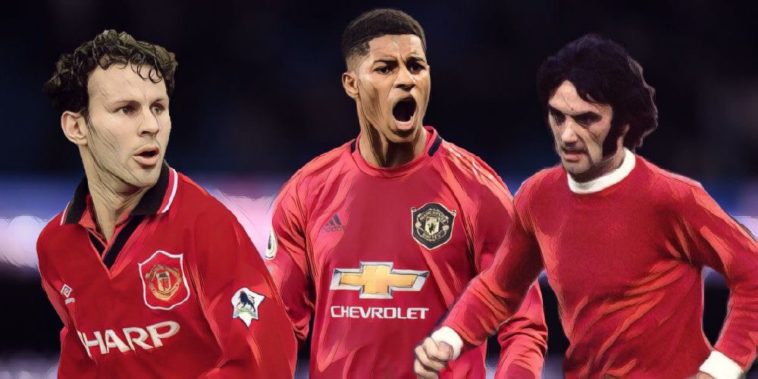 Marcus Rashford made a landmark appearance for Manchester United during the club’s 4-0 win over Norwich at the weekend, the forward making his 200th appearance with two goals in a comprehensive win.

Rashford’s landmark tally is all the more remarkable given that he is still just 22-years-old, the Wythenshawe-born academy graduate making his debut as a teenager, before becoming one of the youngest players in the club’s long history to reach the 200 match landmark.

The Belfast-born midfielder would become Matt Busby’s final signing at the club, making his debut in a baptism of fire as a 17-year-old, scoring and providing two assists in a 3-3 derby draw with Manchester City in 1971.

McIlroy would feature regularly as the club suffered a shock relegation three years later, before playing an influential role in the club’s instant return to the top flight the following year.

The Northern Ireland international would become a mainstay of the side for over a decade, making 419 appearances in all competitions and winning the FA Cup under Tommy Doherty, playing the entirety of the 90 minutes as Liverpool were beaten 2-1 at Wembley.

McIlroy would eventually depart in a club-record deal for Stoke City in 1982, before later having spells at the likes of Manchester City and Bury.

The current hometown hero is beginning to become a talisman figure for his boyhood side, Rashford scoring twice in the win over Norwich to celebrate his 200th appearance in some style.

Rashford burst onto the scene as a teenager with two goals on his debut against FC Midtjylland in the Europa League four years ago, before repeating the feat with another brace on his Premier League bow against Arsenal just days later.

Since then the forward has continued to shine as virtually an ever-present, winning the FA Cup, League Cup and Europa League in recent seasons.

The youngest player to score on his debut for England, Rashford has continued to improve season upon season and his record for the club now stands at 64 goals in those 200 appearances, with only Jamie Vardy having scored more in the Premier League so far this season.

Having signed a new long term deal last summer, United are likely to see the best years of a player who grew up dreaming of representing the club.

The greatest player in the club’s history? Certainly a contender.

Sir Alex Ferguson was left mesmerised by the talents of the young winger, swiftly beating off competition for his signature and securing the services of the precociously talented Welshman.

Handed his debut at just 17-years-old, he would score his first goal against Manchester City just weeks later before quickly establishing himself at senior level. He became the first player to be named as the PFA Young Player of the Year in back-to-back seasons in 1992 and 1993, and Giggs would soon help form part of a side that would dominate English football for two decades.

Over a glittering Old Trafford career, Giggs would make a club-record 963 appearances, scoring 168 goals for the club and providing more assists than any other player in Premier League history, 162.

A flying winger in his youth who transformed himself into a to a more central player in his latter days, Giggs’ longevity and success is unlikely to ever be surpassed.

One of the most naturally gifted footballers the game has seen, George Best would become an iconic figure in the history of British football as part of Matt Busby’s European Cup-winning side, the maverick abilities of the Northern Irishman making him one of the most popular figures in Manchester United history.

The Belfast Boy would initially struggle with homesickness before giving it another try in Manchester, quickly developing into one of the most promising talents in the game with his seemingly effortless ability to beat defenders.

Alongside Bobby Charlton and Denis Law, Best would help inspire the club to two league titles and a first-ever European Cup, becoming the first English side to win the trophy and being named as the winner of the Ballon d’Or that season.

Best’s notorious lifestyle perhaps prevented him achieving even more, though he would score 179 goals in 470 appearances before leaving the club in 1975.

Few players have captured the imagination like the dazzling Best, a statue of the club great fittingly sitting outside his spiritual Old Trafford home alongside Charlton and Law, the infamous holy trinity.

The third Northern Irishman to feature on this list, Whiteside’s career would sadly be cut short by injury, but not before he had sent a whole host of records tumbling.

Making his debut as a 16-year-old, Whiteside would become the youngest player to score a senior goal for United, netting against Stoke City on the final day of the 1981/82 season, just eight days after turning 17.

His list of records would later include becoming the youngest ever goalscorer in a League Cup and FA Cup final, whilst also becoming the first player to net in both finals in the same season. Whiteside would leave for Everton having twice won the FA Cup at Old Trafford, his record standing at 68 goals in 278 appearances.

A knee injury would see him retire just two years later at the age of 26, the World Cup’s youngest ever goalscorer never quite reaching his full potential.

Read – Five players with the most Premier League wins ever