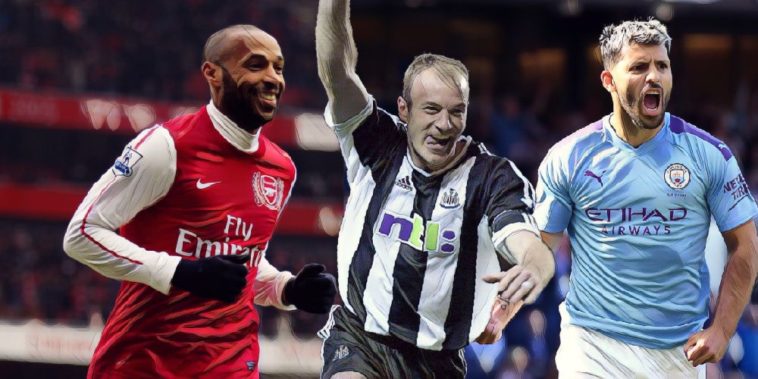 The Premier League has played host to some of the greatest goalscorers of modern times, with only a select few having reached the landmark of 150 goals in English football’s top flight since its rebranding in 1992.

We’ve decided to revisit some of the most prolific players in Premier League history, and rate the exclusive nine who have scored over 150 times in the division…

A career very much of two halves, Michael Owen would burst onto the scene as a teenager at Liverpool before developing a reputation as one of the most electric forwards in European football.

Possessing lightening pace and an ice-cold temperament in front of goal, Owen would win back-to-back Premier League Golden Boots whilst still in his teens, being named as the PFA Young Player of the Year and Premier League Player of the Season in the first of those campaigns.

His finest season would perhaps come in 2000/01, scoring 24 times in all competitions to help Liverpool to a treble of cup wins, including scoring a late match-winning brace to secure Gerard Houllier’s side a come-from-behind victory in the FA Cup final against Arsenal.

He would become the second youngest recipient of the Ballon d’Or later that year, the last Englishman to win the honour, before leaving Liverpool in 2004 for Real Madrid.

After just one season in Spain he would return to the Premier League with Newcastle before later joining Manchester United and Stoke, though the second period of his career in England was decimated by injuries and he would never be the same player.

He would retire having scored 150 Premier League goals in 326 appearances, winning one league title as a bit-part player during his time at Old Trafford.

Another player who emerged as a bright young prospect, Defoe was one of a collection of West Ham academy graduates who would go on to become established England internationals.

The diminutive forward would score regularly during spells at West Ham, Tottenham, Portsmouth, Sunderland and Bournemouth, whilst he holds the record for most Premier League goals by a substitute with 22 and the most goals ever scored in one half with five against Wigan in 2009.

A natural finisher, Defoe would never make the step up to a side capable of challenging for a league title but was a regular source of goals for several Premier League clubs, scoring 162 times in 496 appearances.

Still going strong in Scottish football with Rangers, the 37-year-old has scored 10 goals in 10 league games for Steven Gerrard’s side so far this season.

A poorly kept secret within the academy ranks at Anfield, Robbie Fowler would be handed an opportunity as a precocious teenage talent before becoming renown as one of the most natural finishers in the Premier League.

An instinctive goalscorer, Fowler would plunder 65 league goals across his first three years as regular at Liverpool, winning back-to-back PFA Young Player of the Year awards in 1995 and 1996.

Nicknamed ‘God’ by Liverpool fans after scoring 171 goals in just 330 appearances during his first spell at the club, he would help the club to a memorable treble of cup wins in 2001 before joining Leeds and later Manchester City.

He would make an emotional return to Liverpool under Rafael Benitez in 2006 and would score a further eight league goals, his tally of 163 Premier League goals making him the seventh-highest scorer in the competition’s history.

The only active player in this feature, the Manchester City star remains one of the most ruthless goalscorers in the Premier League and looks sure to climb these rankings in the coming seasons.

No player in Premier League history to have scored over 100 goals has a better goals-per-game record than the Argentina international, who has scored 173 times in just 250 league appearances since moving to the Etihad from Atletico Madrid in 2011.

It was that goal against QPR that sealed City’s first Premier League title in the most dramatic of finishes to his debut season, whilst he has since been a key part of a further three title-winning sides and the first side in English football history to complete a domestic treble.

One of just two players alongside Thierry Henry to hit 20+ goals in five successive seasons, Aguero has the opportunity to own the record outright after scoring nine times already this season.

One of the greatest players in the club’s history, no player has ever scored more goals in the blue shirt of Manchester City.

Arguably the greatest player in the history of the Premier League, former Arsenal legend Thierry Henry is one of the most iconic figures to have ever played in English football’s top flight.

The French forward would score 175 goals during a glittering career in North London, an eight-year spell that would see him help the Gunners to a domestic double in 2002 before completing a famed unbeaten season two years later.

A record four-time winner of the Premier League’s Golden Boot award, Henry would win consecutive PFA Player of the Year and Football Writer’s Footballer of the Year awards in 2003 and 2004, before adding a third FWA award as the division’s best player in 2006.

Possessing lightning pace, cool finishing and an ability to ghost past players at will, there were few better sights than Henry in full flight during his pomp. A great goalscorer and creator, he also holds the record for the most assists in a single season, having registered 20 in 2002/03.

The fourth-highest goalscorer in Premier League history would be some achievement for any player, but for a midfielder to score so prolifically is truly astonishing.

It seems strange to think that many felt Chelsea had overpaid when parting with £11m to sign the young midfielder from West Ham in 2001, a fee that proved to be one of the greatest purchases in the club’s history.

Lampard would go on to form part of the spine of a Chelsea side that would emerge as English football’s finest, scoring twice to seal their first league title in 50 years against Bolton under Jose Mourinho in 2005.

He would be named as FWA Footballer of the Year that season, before helping Chelsea to back-to-back titles the following year as Roman Abramovich’s billionaire investment took hold.

In over a decade at the club Lampard would win every major honour including three league titles and the Champions League, becoming the club’s all-time record goalscorer in the process and being recognised as one of the greatest midfielders in Premier League history.

A winner of five Premier League titles during a trophy-laden spell at Manchester United, it would be at Newcastle where Cole would first make his mark on the top flight, smashing a league record 34 goals in his first full campaign in 1993/94 to win the Premier League’s Golden Boot and PFA Young Player of the Year awards.

A prolific start to the following campaign would persuade Sir Alex Ferguson to sign the forward in a British transfer-record deal, where he would strike up a telepathic understanding with strike partner Dwight Yorke that would propel the Manchester side to silverware.

Cole would score 94 league goals in just 195 appearances for United, forming part of the side which would win an unprecedented treble of Premier League, Champions League and FA Cup in 1999.

After leaving Old Trafford he would later have spells with the likes of Blackburn, Fulham, Manchester City, Portsmouth and Sunderland at Premier League level, scoring a total of 187 times to make him the third highest goalscorer in the league’s history.

The second highest goalscorer in the history of the Premier League, Wayne Rooney was another star who burst onto the scene as a teenager before establishing himself as a leading light of the division.

Having emerged at boyhood club Everton, including scoring that late winner against Arsenal as a16-year-old, he was signed by Manchester United in 2004 becoming the most expensive teenager in football history.

In 13 seasons at the club he would win five league titles and the Champions League amongst a host of major honours, becoming one of just two Englishman alongside Michael Carrick to win a league title, FA Cup, League Cup, Champions League, Europa League and Club World Cup.

Rooney would score 253 goals in all competitions for the club to eclipse Sir Bobby Charlton as their all-time record goalscorer, whilst his 183 Premier League goals are a record for a single club.

He would return to Everton for a single season in 2017/18 before heading to MLS, scoring a further ten times and becoming just the second player in the competition’s history to reach 200 Premier League goals.

Far and away the greatest goalscorer in Premier League history, Alan Shearer’s record of 260 goals in English football’s top flight is a figure unlikely to be matched.

Having joined ambitious Blackburn in a record-deal ahead of the inaugural season of the Premier League, Shearer would fire the goals to deliver the Lancashire side a first league title in 81 years.

In four seasons at Ewood Park Shearer would score 112 league goals in just 138 appearances, becoming the only player in Premier League history to score 30+ goals in three consecutive seasons.

He would be named as FWA Footballer of the Year in 1994 and PFA Player of the Year the following season in Blackburn’s title-winning campaign.

A world-record move to boyhood club Newcastle would follow, where he would continue to score at a prolific rate and would win a second PFA Player of the Year award in 1997, the three-time Golden Boot winner becoming the record goalscorer in Newcastle’s history.

Shearer would ultimately miss out on team success in pursuit of silverware with his hometown club, though he will be remembered as one of the greatest centre-forwards in the division’s history.