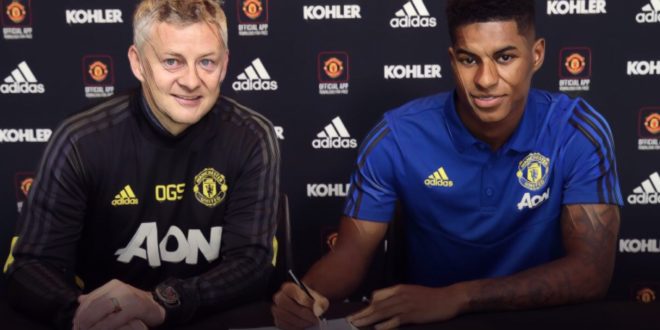 The England international burst onto the scene as an 18-year-old during the Louis van Gaal era, scoring twice on his debut in a Europa League tie against Midtjylland.

Despite featuring for England at both Euro 2016 and last summer’s World Cup in Russia, Rashford struggled to establish himself as a first team regular under Jose Mourinho and when he did he feature, he was more often than not deployed as a wide forward.

Rashford had been heavily linked with moves to Spanish giants Real Madrid and Barcelona earlier this summer, but that speculation has now come to an end with the attacker committing to his boyhood club until 2023.

As always, it’s been interesting to see how the good people of Football Twitter have reacted, so let’s get the ball rolling with reaction from the man himself…

Manchester is my home. United is my team. Proud to have signed a new contract at the club ⚽? #MUFC pic.twitter.com/3Xr5OInDhl

As usual, there has been plenty of fancy graphics and encouraging stats in reaction to the news…

Marcus Rashford signs a new deal with Manchester United that keeps him at the club until 2023. ? pic.twitter.com/HiQi99LfYw

Sum up in one word how you feel about @MarcusRashford's new long-term contract ? pic.twitter.com/W54BNMS3pZ

? Most goals for Manchester Utd in all competitions since Marcus Rashford's senior debut in Feb 2016:

Marcus Rashford has scored on his….

However, we won’t lie the vast majority of the reaction hasn’t been all that positive, with some of it just outright hostile. There seems to a general feeling among United fans that despite Rashford being a big talent he still hasn’t done even nearly enough to justify such a sizeable contract…

£250,000 for Rashford’s extension is extortionate. Harry Kane is on far less and provides twice as much.

Apparently, Rashford will a new deal worth £250,000 per week. I’m fully convinced that there was a clause in the Alexis Sánchez/Henrikh Mkhitaryan swap which guarantees a bonus prize to be paid to the club which manage destroy their wage structure more within the next 18 months.

Offering Rashford £250,000 a week at the age of 21 is everything that’s wrong with this club. I know he is ‘manc born and bred’ but his recent performances do not reflect/are not worthy of this wage. Ridiculous. https://t.co/KPRX4Q1hg7

Two have signed a new contract, the other two… pic.twitter.com/ICDCrB2fCl

£250,000 a week for Marcus Rashford who only scored 10 goals in the Premier League this season. Alarming.

He's a promising young player but in no way does he warrant that kind of money. pic.twitter.com/nOd76rpCie

Rashford finds out what United are offering him for scoring 22 goals in 3 full seasons #MUFC pic.twitter.com/qcpJrMBOTL

Van Dijk is on 180k, Salah is on 200k mane is on 150k and we know what they have contributed to their clubs.
Our dear Rashford wants 250k?
The sickest part is that United are discussing it pic.twitter.com/5mvHq4WqU3

If Rashford signs a new contract for 250k a week. “Yes police please I’d like to report a robbery” pic.twitter.com/I7rwoMH0eY

This is what Rashford did to your RB. Be humble pic.twitter.com/VbYm6VE3U8